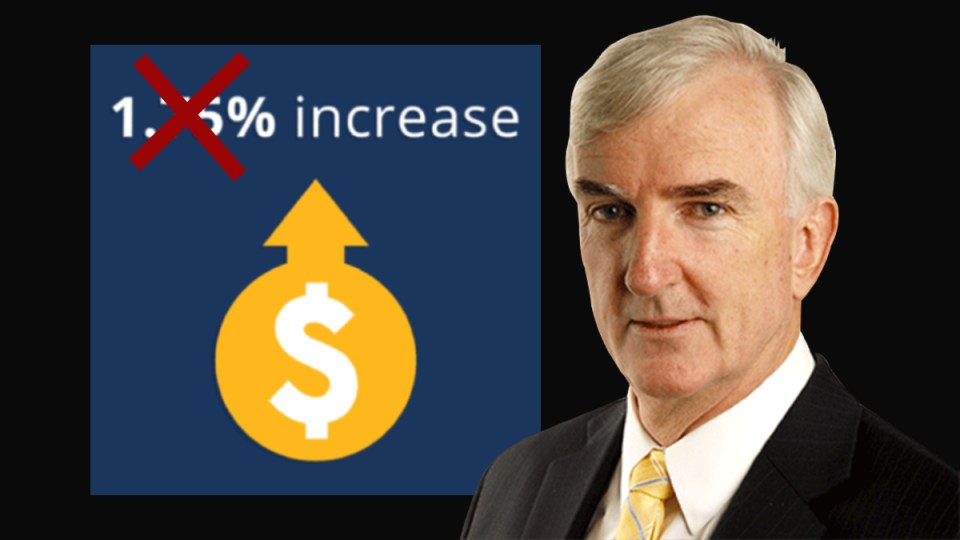 A lift in the superannuation guarantee is worth far more than an equivalent wage rise, Michael Pascoe says. Photo: TND

There is the real world and then there are economic theories and models.

The campaign against increasing the superannuation guarantee levy prefers to ignore the real world.

In the worst-case scenario for anyone on average or median wages, a $1 increase in the super levy is worth 12.5 per cent more than a $1 increase in wages. The anti-SGL brigade overlooks that.

In the really real world, for many people the difference is much greater, more like 27 per cent.

Also in the really real world, it’s not a simple choice between an increase in wages or SGL.

A great deal of effort in some quarters has gone into claiming that it is, ignoring the probability that it would be a bit of both if the government sticks to its legislated increase in the SGL.

The latest shots in the anti-SGL war were fired this week by the Australian Financial Review, which twice somewhat breathlessly reported it had “obtained” a 70-page study by two ANU economists commissioned by the government’s retirement income review.

(The story, branded “exclusive”, might suggest a dark alley and a drop box, or at least an exchange of passwords to “obtain” the report.

Nah, it’s up on the Crawford School website and has been for a couple of months for anyone who is interested. Here’s the link.

The study by Professor Bob Breunig and Kristen Sobeck used historical tax office data to try to work out to what extent increases in the SGL end up being at the expense of wages growth, which is what standard economic theory suggests and the anti-SGL mob likes to trumpet.

(Mind you, that’s the same standard economic theory that says if companies pay less tax, they will pay their employees more. Apparently if there was no corporate tax or SGL, workers would be fabulously well paid. Sure.)

The clearest finding is that wages have been rising more slowly for people working in industries that already enjoyed employer super contributions greater than the SGL – though there is a warning that other factors might be at play about the nature of such industries.

It also finds wages growth for SGL-only workers has fractionally slowed after the SGL has been increased.

Personally, I suspect there was so much happening globally concerning the problem of low wages growth the last time the SGL was increased, in the 2014 and 2015 financial years, let alone with the tone of the change of government here and subsequent slowing of economic growth, that it’s a brave soul who can precisely finger the role the SGL played.

And I’ve seen nothing to change my mind about the SGL war since I wrote back in February that it’s not as black-and-white as either side claims.

But for the sake of the exercise, let’s adopt the suggested worst-case scenario, that every dollar increase in SGL comes at the cost of a dollar foregone in higher wages.

The real world doesn’t overlook the tax impact, but Professor Breunig and Ms Sobeck were only commissioned to look at what might happen to wages when the SGL increases.

That ignores two other factors that shouldn’t be ignored:

At the same time, there is a trade-off relating to age – the closer to retirement, the clearer the value of extra money in SGL appears; at a young age, the dollar in the hand might appear more appealing despite the loss of compounding investment returns.

Backing off the Breunig and Sobeck study’s worst-case suggestion, there’s plenty of room to wonder about the size of the impact on wages.

The Reserve Bank has done a fairly light analysis of the SGL/wages issue, leaning towards the “wages growth will be reduced” camp, to the delight of the usual suspects.

But there’s not much weight in that RBA lean – its best guess being that wages would be 1.75 per cent lower than otherwise over the “long term” if the legislated SGL increase goes ahead.

As another observer has put it: “If you assume the long term is 15 years and wages rise on average 2 per cent per annum, than this 1.75 per cent comes off what should be a 35 per cent rise in pay.”

That’s not much of a cost for the more dollars received and the eventual effect of compounding investment.

And if there was any other reason to be wary of the vehemence of the anti-SGL political mob, consider who they predominantly are – the likes of Tim Wilson, Andrew Bragg and Jason Falinski, who furiously cater for their base of employers and investors.

If it really worked out to be the same or even better for employers if the SGL is increased, do you think Wilson, Bragg, Falinski & Co would think it’s worth campaigning about?

None of the historical studies – and that includes the pro-SGL efforts – can capture the current angst over an uncertain economy, employment and the sub-standard wages growth of the past half dozen years. Nobody has data on the future.

My best guess is that Australia’s employees have more or less surrendered to capital’s strike of only giving wages increases of about the CPI and a bit less than that for the next year or two, using COVID as either a genuine reason or an excuse.

Throwing a 0.5 per cent SGL increase into the mix might shave the counterfactual average wage rise, but not by a lot. Which is why the political opponents don’t like it.

If they had shown anything other than antipathy to current wage levels, never mind the idea of strong wages growth, they might have some credibility. They don’t.