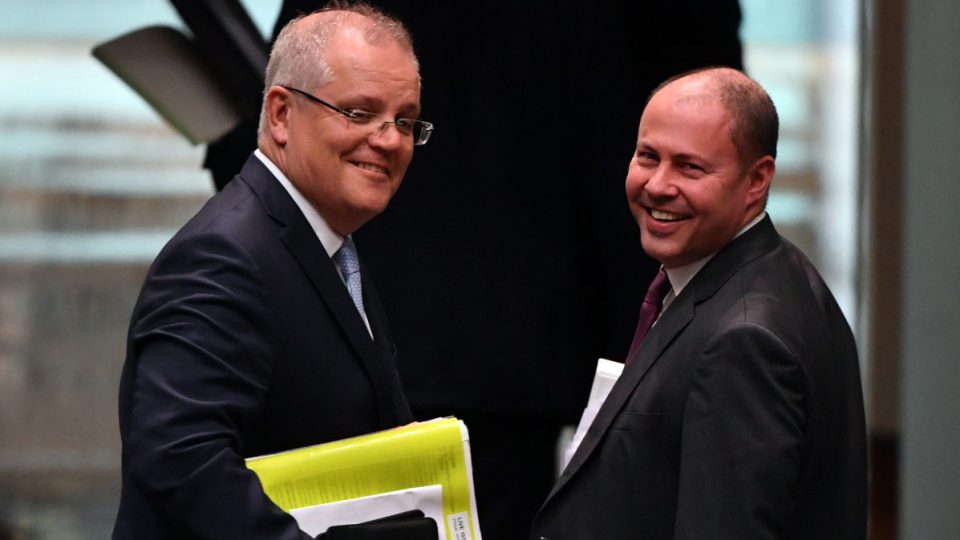 Having a go – for the wealthy: Scott Morrison and Josh Frydenberg. Photo: AAP
analysis

One of parliament’s final achievements for 2020 was to extend the reduced Jobseeker supplement until the end of March, whereupon it is scheduled to return to a rate regarded as insufficient and/or penal by just about everyone except Scott Morrison.

The Prime Minister said the financial “lifeline” could not be allowed to hold Australia back as the country moved into the next phases of recovery.

Yes, we’re getting back to bashing “dole bludgers” while there are several hundred thousand more unemployed people than there are available jobs, never mind more than a million people underemployed.

For reasons of simplicity, debate about the standard subsistence Jobseeker rate tends to focus on what a single person with no dependents receives. The real world is considerably more complicated and becomes much more complicated when there are young families.

The good news is that we have a social security system that prevents young families starving. The bad news is the way it interacts with the tax system, whereby we demand people work longer and harder for nothing, often in lower-paid, less-than-glamourous jobs.

And if people respond in an economically rational way to the government’s policies, they are labelled welfare slobs and job snobs who must be prodded and punished.

Cue the outrage by conservative politicians, shock jocks and the Daily Telegraph editor. The perverse thing is that these tend to be the same people who keep pushing for a lower effective marginal tax rate (EMTR) for the wealthy – “they need the incentive of more money to be wealthier!” – while persecuting the poor who have the nation’s highest EMTR – “they need less money to make them work!”

If you are wealthy, no matter how many millions you might earn, 47 per cent is the most your EMTR will be.

For people coming off social welfare payments or trying to reduce their dependence on welfare, the EMTR can be 100 per cent and more.

David Plunkett is a retired public servant who has made a specialty of understanding the interaction of our tax and transfer systems. He produces graphs that can appear fiendishly complicated but tell the story of a fiendish system.

We have simplified one of his graphs that shows what happens in the real world (not Parliament House, not the comfortable circumstances that produced most government members, not over-paid shock jocks’ studios) when a family comprising of a single-income couple with three children tries to “have a go”. 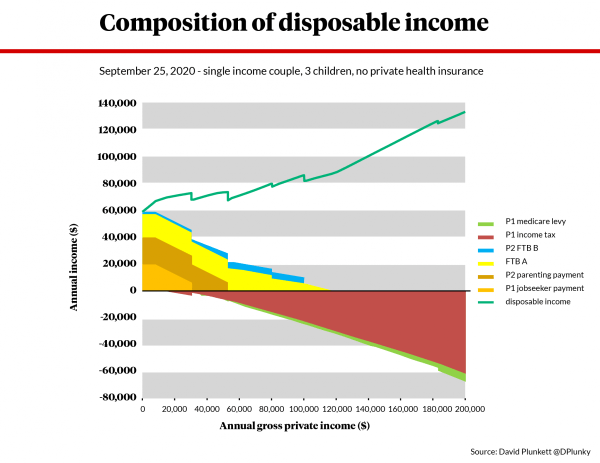 The good thing it shows is that in September, when Jobseeker was effectively doubled by the supplement, if the breadwinner was unemployed, the various available welfare payments for such a family meant they still had disposable income of about $60,000 a year – close to the median wage and what you’d need to not starve with five people to feed, clothe and shelter.

The disposable income line at the top of the graph shows what happens as the bread-winner gets a job at various levels.

In rough terms, picking up some casual shifts that pay $20,000 a year before tax results in an EMTR of about 50 per cent – for the effort, the family gets about $10,000 more dollars after reduced welfare to have disposable income at about $70,000.

Between $20,000 and $60,000 of gross wages income, there are a couple of cliffs when means test cut off points are hit, whereby working an extra shift actually costs money.

Those teeth on the graph represent the loss of more than $5000 a year for earning a little more. They are what David Plunkett labels our “chunky” withdrawal system.

Ignoring those cliffs (and we shouldn’t), you can see that disposable income remains stuck at about $70,000 a year between wages income of $20,000 to $60,000. Over that range for someone on an hourly rate, it’s pretty much a matter of working more to get no more.

From $120,000 up – when folk certainly aren’t on lowly hourly rates – the EMTR falls back to the ATO income tax rates which are generous by comparison.

And another funny thing: it’s the top 20 per cent, those on about $90,000 and above, who have gained and will gain the most from the Morrison government’s legislated tax cuts and who have suffered the least bracket creep.

That might seem counterintuitive, or at least counter-government spin, but it is the reality as explained by another graphmeister, The Guardian’s Greg Jericho, using the Parliamentary Budget Office’s annual “medium-term budget predictions”.

As Mr Jericho tells it: Last year the treasurer, Josh Frydenberg, told parliament that “creating one major tax bracket between $45,000 and $200,000” would “tackle bracket creep”.

He suggested that “if you get another job or a promotion, or you do some overtime, you won’t necessarily pay a higher marginal rate of tax”.

But that is not bracket creep. That is you getting a higher-paid job and as a result paying a higher level of tax.

That is how progressive taxation has worked for over a century.

And this explains why the pitch to solve bracket creep was really just a distraction for what the government really wanted to do – reduce taxes for higher incomes.

And the PBO has found that is exactly what they have done.
And that’s just the income tax rates, ignoring the complexity of the transfer system.

Of course, Mr Plunkett’s graph can be interpreted very differently.

If, say, you wanted to get a good run in The Australian newspaper, you could point at the graph and say it shows that only families earning more than $80,000 a year pay any tax at all and blessed are the wealthy.

That argument has indeed been run at length at various times in the Liberal Party Gazette. It’s wrong firstly because it ignores GST, which less-well-off people pay proportionately more, and because it portrays our progressive tax as a bad thing, as if it’s wrong young families on below-average incomes pay no net tax. That is what is meant to happen.

It wilfully dismisses the fact that our progressive tax system and the social security net it provides have built a rich, relatively cohesive and secure society – one that has enabled the rich to get comfortably richer.

Those of us fortunate enough to be net tax payers are investing in our society, enabling the three young children in Mr Plunkett’s example to become the sort of citizens we’ll need down the track to carry the burden many of us will become.

To have the society we are capable of, the biggest challenge isn’t to enable the wealthy to pay less tax or a lower rate of tax – in the real world, the rich don’t require government incentives to get richer – but to smooth out those “chunky” transfer withdrawals.

It should reduce the heinous EMTRs whacking of people coming off welfare or using childcare to decrease the system’s very real economic disincentive to work.

That’s the challenge on which a good government would be concentrating.