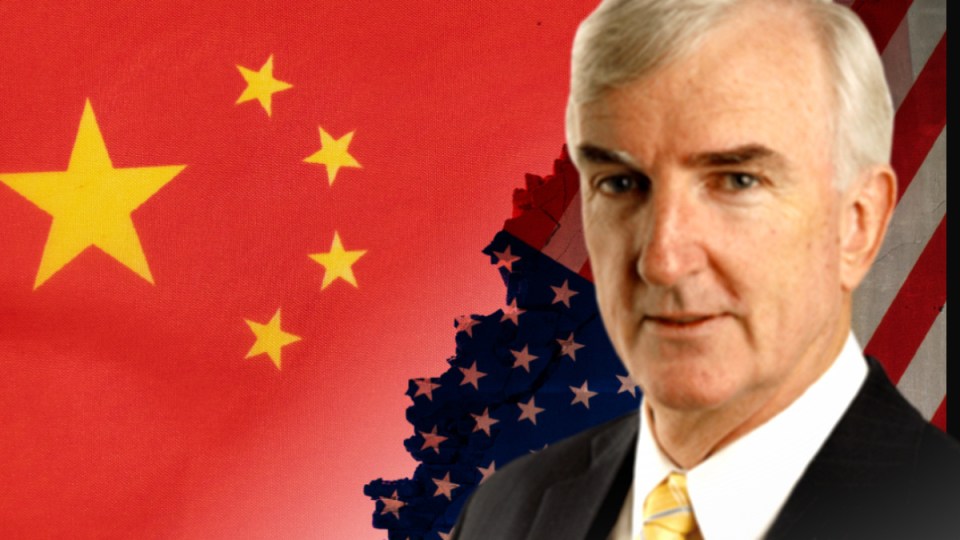 Michael Pascoe says the US-China tension is only just beginning.

“Don’t criticise someone until you’ve walked a mile in their shoes. That way you’re a mile down the road and you have their shoes.”

There’s wisdom in that old advice, with or without shoe theft, but it seems to be an idea totally foreign to the sundry “Chinah” hawks and Sinophobes dominating discussion of the relationship with our most important economic partner.

With that relationship at its lowest ebb since 1972 and  the United States sabre rattling in the lead up to the November election, it’s worth trying it to figure out how we managed to get into this mess – straddling a barbed wire fence as we try to find our lost way between Washington and Beijing.

Maybe, just maybe, our Foreign Affairs officials have been able to claw back a little of the policy ground lost to the security and defence establishment and the rabid backbench “Wolverines”.

It was a small victory for diplomacy that Foreign Affairs Minister Marise Payne pulled up short of going all the way with Donald J – or troppo with Pompeo – in Washington last week.

The headlines have concentrated on where Senator Payne did not go along, which has led to some overlooking of the considerable way she did go with American posturing for its new Cold War.

(On another day, cartoonists might have been transfixed by the juxtaposition of the US wanting a strategic fuel reserve in Darwin for its Asian operations while Australia  is paying to keep its strategic crude oil reserves in the US, on the other side of the Pacific.)

It was still a considerable step from Scott Morrison’s overeager kow-towing, but it hasn’t made the Cold War go away or altered our problem of wanting our economic partnership and sniping at it too.

The two key points of conflict for us are technology and the South China Sea.

On the former, Australia with Malcolm Turnbull as Prime Minister was at the forefront of the move to shut Huawei out of 5G networks, lest China does what the US and Australia do and force technology companies to let the government spy on people.

The technology Cold War is gathering steam. China understandably wants to move further up the value chain, the US wants to protect an area where it had been a leader – and maybe it is concerned about spying as well.

It would suit the US, at least in the short term, if the global market was split between the two super powers, both for protectionist reasons and as part of its announced desire to contain China.

In the longer term, it would be a poor outcome for the world if the best technology was not freely available.

Technology is where things go “hack”. The South China Sea is where there is a danger of things going “bang”.

This is where it’s worth considering the tension from Beijing’s viewpoint.

In 1962, the United States took the world to the brink of potential nuclear war to deny the Soviet Union having a missile base in Cuba. (That’s the little island where the US continues to have a military base of its own.)

The US now insists on its right to patrol massively powerful nuclear carrier attack groups on China’s doorstep while steadily ratcheting up its attacks on all things Chinese. How do you think that looks if standing in China’s shoes?

Then there’s the matter of the line trotted out with every anti-China South China Sea story, that a vast proportion of the world’s shipping passes through the South China Sea.

Yes, and the vast majority of it is to and from China.

The talk about protecting free passage of shipping means much more to China than anyone else in this game, particularly when the Chinese navy is bathtub class compared with America’s. China is wary of America’s ability to cut it off from the world.

The escalation has not been one-way traffic in a murky situation further complicated by the issue of Taiwan’s independence (as long as it isn’t called independence) and America’s ability to defend it.

It is very disappointing that China is throwing its weight around and needlessly bullying its smaller neighbours, but it has been restrained bullying compared with the rise of every other major power.

As far as bullying, use of force and interference in the internal affairs of other nations considered part of its sphere of influence goes, America’s track record in the Middle East, Latin America and Indochina looks pretty rich when seen from Beijing.

And the US does have a capacity for superpower blunders.

Another Republican president infamously declared Iraq, North Korea and Iran the “Axis of Evil” and proceeded to invade one of them with lethal results for its leader. Little surprise that the other two immediately wanted nuclear weapons.

Now the US is talking up China as the world’s greatest villain and explicitly wants to limit its growth. If you were charged with defending China’s interests …

China is doing appalling things internally, most obviously its ruthless persecution of the Uyghurs after armed resistance to their suppression and marginalisation in Xinjiang.

But doing dreadful things to minorities is what many countries do.

What Russia did in Chechnya, what Myanmar has done to the Rohingya, what Sri Lanka has done to the Tamils, what India is doing in Kashmir, never mind various conflicts in Africa and the capacity of Middle Eastern dictatorships to persecute one group or another from time to time.

That doesn’t excuse China, but it puts its human rights crimes in some context – everyone else seems to get away with it, as the US did.

A small example of seeing an issue from the other side’s viewpoint came from a most unlikely source last week: Donald Trump.

In an interview to be shown in full on Monday night but with a key excerpt already released, Trump was nonplussed about Russia supplying arms to the Taliban to be used against US (and potentially Australian) troops.

The immediate scandal was Trump admitting he had not raised with Putin the question of Russia paying the Taliban a bounty for killing Americans.

But when asked about Russia supplying arms for the Taliban:

Reporter: “That was a different era.”

In the nature of Trump interviews, it became crazier, but for a moment there was clarity: Russian people were just doing to the US what the US had done to Russian people – and that was no big deal for Donald Trump.