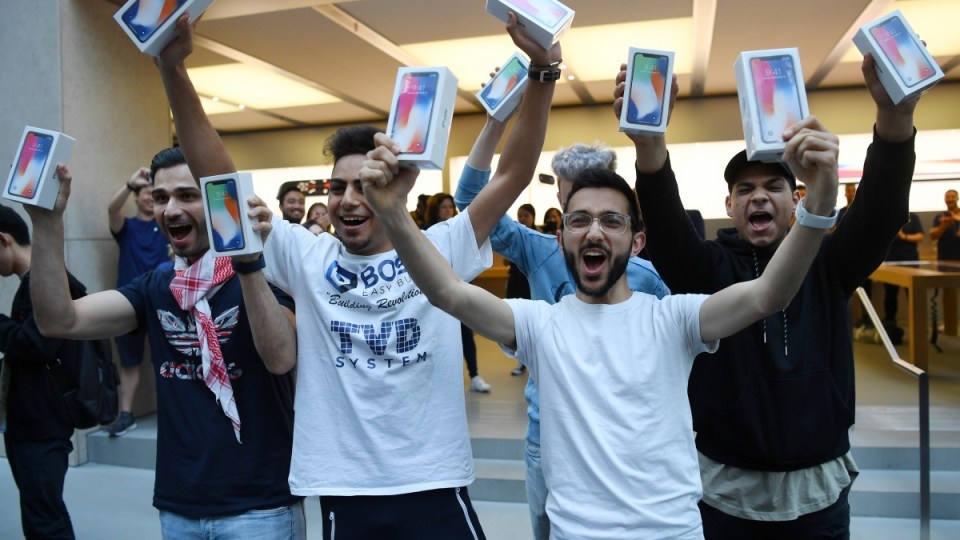 Customers queued up at dawn outside Sydney's Apple store to get their iPhone X. AAP

Figures from the Australian Bureau of Statistics, released on Thursday, showed retail sales for the month of December were up 1.2 per cent.

That may not sound like a lot, but it was actually three times more than most economists were expecting.

The ABS identified two main causes for this better-than-expected result, and both of them were US imports.

The first was ‘Black Friday’, a US tradition that sees retailers offer large scale discounts on a wide range of merchandise on the day after Thanksgiving, which falls on the fourth Thursday of November.

The second was the iPhone X, which was released in Australia on November 3.

Sales of households goods, which include electronics, jumped 4.5 per cent. Drilling down further, sales of electronics jumped a phenomenal 9.3 per cent – by far the biggest increase of any individual sector.

Apple did not respond to The New Daily‘s request for sales figures for the iPhone X. However, both the ABS and the retail sector agreed that the launch of the smartphone – which prompted massive consumer interest – was central to the boost.

The Australian Retailers Association, the voice of the collective retail sector, welcomed the figures, saying they represented a “slow but positive lead into Christmas”.

“This is not surprising as a number of new technologies including Google Home, the iPhone X and the Xbox One X were released in November, giving many Australians an early jump on new gadgets before Christmas.”

He said that the figures suggested Christmas retail figures – which the ARA initially projected to be disappointing – would reach the $50 billion figure, giving the sector “a slight boost as retailers head into the new year”.

The winners and losers

However, the ABS projected this to be very much a one off, with ‘trend growth’ actually down 0.3 per cent. Trend growth can be radically different from ‘seasonally adjusted’ growth because it smooths out one-offs and anomalies.

In this case, the trend growth would factor out the one-off launch of the iPhone X.

Clothing, footwear and personal accessory retailing was up 1.6 per cent in seasonally adjusted terms, with clothing doing particularly well, at 2.2 per cent growth.

The food and drinks sector saw flat growth, with liquor up 1.2 per cent, and supermarket and grocery retail down 0.1 per cent.

In other sectors, book and newspaper sales were up 0.1 per cent, while cafes, restaurants and takeaway food services were up 0.4 per cent.