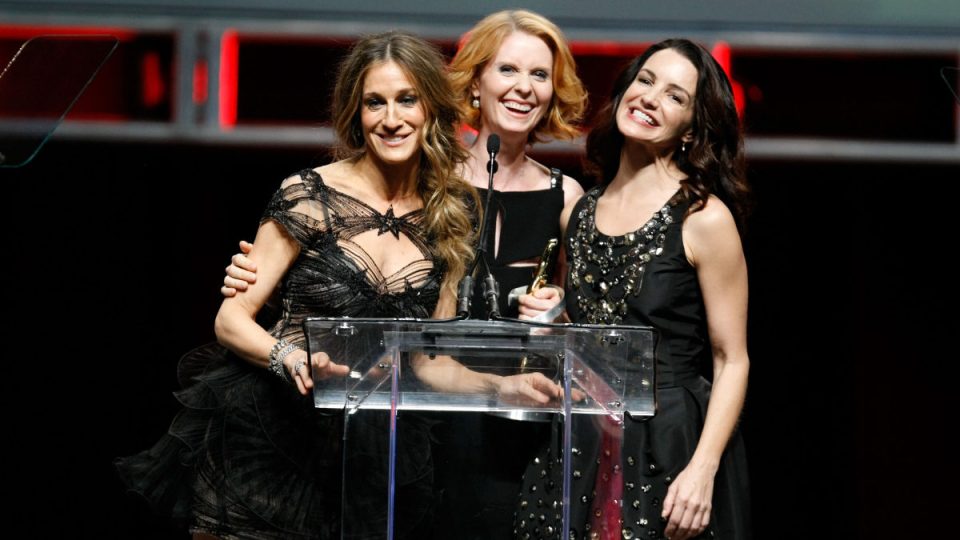 Sarah Jessica Parker, Cynthia Nixon and Kristin Davis are reuniting for a Sex and the City revival, but the dating world has changed. Photo: Getty

And just like that … Sex and the City was revived. In January news dropped that the iconic Nineties and early Noughties series would be back, with ten new episodes on HBO’s streaming service, HBO Max.

According to Hollywood trade rag Deadline, the series is set to be titled And Just Like That, a favourite expression of the main character, Carrie Bradshaw (Sarah Jessica Parker).

To borrow another phrase from Bradshaw’s arsenal, but we couldn’t help but wonder, is Sex and the City still relevant? The series has seen two unsuccessful spin-off movies; however, the real issue here is the applicability of the Sex and the City world to 2021. The series ran from 1998 to 2004. A lot has changed in the dating world in the last twenty years: so is Sex and the City relevant to a contemporary audience?

For those unfamiliar with the series, Sex and the City followed the sexual exploits, romantic intimacies, career trajectories, and friendship of four women living in Manhattan. The ultimate single girl was Carrie Bradshaw, the show’s narrator, a writer whose weekly Sex and The City column gave the show its name.

Carrie was known for her enviable collection of Manolo Blahnik heels, du jour clothes, and on-again-off-again relationship with the mysterious ‘Mr Big’ (Chris Noth). Charlotte York Goldenblatt (Kristin Davis) worked in an art gallery, and for the most part yearned for a husband. PR guru Samantha Jones (Kim Cattrall) famously rebuked traditional ideas of relationships and was the decisive hook-up queen, before the ‘hook-up’ was even a ‘hook-up.’

A central theme in the series was the search for love or sex. For Samantha it was sex, for Charlotte it was love, and everyone else fell somewhere in-between on the hook-up / romance spectrum.

But a lot has changed in the dating scene since Carrie, Charlotte, Samantha and Miranda were meeting for mimosas at the turn of the millennium.

How would the quest of the four women for ‘labels and love’ play out today?

The women of Sex and the City famously met a plethora of handsome, and worthy potential mates in bar, clubs, even on the street during the series. Notably, they met all of them face-to-face. Today, while some people do still meet face-to-face, the research we’ve been working on shows that those kinds of meetings feel increasingly out of reach and maybe even out of date to many people in today’s dating scene: like they come from a time when people were writing with quill and ink and taking ‘turns around the room’.

The biggest change from then to now came with the rise of dating apps.

Online dating has been around since the nineties, but when apps emerged – such as Grindr, one of the first dating apps, launched in 2009; or Tinder, which appeared on our phones in 2014 – paradigms really began to shift. Realistically, it wasn’t that long ago – but dating apps changed the dating scene.

Recent studies indicate that over 52 percent of Australians have made a romantic connection online, and many Australians think meeting someone face-to-face is virtually impossible.

So would Carrie, Charlotte, Miranda and Samantha have had the same relationship exploits had they been dating online? And more importantly, would Carrie have met Big on a dating app?

One of the key storylines within Sex and the City was the relationship between Carrie and Mr. Big. Carrie met Big in the very first episode in a classic ‘meet-cute’ scenario when Carrie dropped her handbag on a Manhattan street and Big, an attractive stranger, stopped to help her collect the contents of her purse (cosmetics and condoms).

Big is clearly typecast as the romantic protagonist: he’s mysterious, unknowable, unreachable, but capable (in glimpses) of a ‘big’ or epic love. He’s also rich, dashing and usually travels in a limo. The pair date, break up, cheat, marry (or get engaged) to other people, and eventually find their way back to each other and live happily (albeit boringly, according to the subsequent movies) ever after.

It’s safe to say Carrie and Big would not have met on a dating app. For starters: Carrie is technologically averse, and has been using the same taped-together Verizon phone for over a decade. When Samantha hands her an iPhone to call Big (after he’s jilted her at the altar), Carrie says: “I don’t know how to work this.” She also struggles with backing up her laptop, and has an assistant help her send any offending emails to an inaccessible place in cyberspace.

Carrie doesn’t like the digital domain, and she doesn’t participate in it. Therefore, it’s not likely that she would be swiping on Tinder on Saturday night.

Big, on the other hand, is comfortable with technology, but he’s kind of a ‘big deal’, hence the nickname. It’s hard to imagine him on a platform like Tinder or Hinge with the rest of the punters. If he were looking for a hook-up or a date, he would probably be on Raya (the exclusive invitation-only app, just for celebrities).

Charlotte would join Carrie in the ‘no dating app’ arena. She would likely describe herself as a romantic whose personality just didn’t translate in the digital domain. As a pragmatic type, Miranda would probably experiment with dating apps, but she would also likely be perturbed by the type of nonsense that regularly goes on, like the multiple ‘hey’ conversation starters, and the images of men with three other dudes (which one is he?).

Samantha would be the dating app savant, using them expertly for hook-ups – but unfortunately, she won’t be joining the new series.

Dating apps have become the way for people to find each other: especially during the pandemic, where face-to-face meetings have become even more inaccessible and unlikely than ever before.

However, despite the virtual ubiquity of dating apps, many users still want the Sex and the City experience. They’d like to emplot themselves within classic romance narratives, complete with a meet-cute moment, where the relationship will progress in an organic way.

In other words, many people want to meet someone when they’re not looking. Like Carrie, many app users would love to drop the contents of their bag and have it collected by Chris Noth. However, many also feel that they are not special or attractive or charismatic enough for such an experience – that those are the kinds of things that happen to Sarah Jessica Parker, not to them.

These are key patterns we’ve identified in our research. Lisa is a PhD candidate examining dating apps and intimacy at the University of Western Sydney. Through her research in this space, as well as through her work as host of the podcast series Slow Love, she routinely hears people describing their desire for an ‘organic’ relationship – something which conflicts with their dating app experience, where things are premeditated and strategic.

Jodi is a Lecturer in Writing, Literature and Culture at Deakin University, and researches the stories we tell about love in popular culture. Importantly, there are not a lot of stories out there about people falling in love via dating apps, which might explain why so many people are in a love/hate relationship with them. They want to find the kind of love they see in the movies (or on Sex and the City), where everything happens by chance, not by swiping right – but they also feel like the apps are the only place where they can really meet someone, something made even more true by the pandemic.

So we wonder – will Carrie, Miranda and Charlotte navigate the world of dating apps?

Will ‘And Just Like That’ give us any stories about falling in love via an app?

Will the women be experimenting with new relationship paradigms (the throuple, or a consensually-non-monogamous union)? Or will any of them have split from their significant other, the men who were previously positioned as ‘the one’: Big, Steve, and Harry?

One thing is for sure, it’s hard to translate the visual nature of the dating app relationship inception for TV. Seeing Carrie swiping right on her couch, swigging at a beer, in her pyjamas is not quite the vibe of the Sex and the City we have all come to know and love.

How will the now-coupled three ladies of And Just Like That negotiate the not-so-single-girl narrative? We’ll wait and see – while multi-tasking, likely swiping on dating apps.

Lisa Portolan is a PhD researcher on dating apps and intimacy at Western Sydney University, and the author of Pretty Girls (2020) and Happy As (2018). She is the host of the Slow Love podcast (produced in conjunction with Contento), a podcast on sex, intimacy and relationships

Dr Jodi McAlister is a Lecturer in Writing, Literature and Culture at Deakin University in Melbourne. She is the author of The Consummate Virgin: Female Virginity Loss and Love in Anglophone Popular Literatures (2020) and young adult paranormal romance seriesValentine (2017), Ironheart (2018) and Misrule (2019).

The dating world has changed. Will HBO Max’s revived Sex and the City still be relevant?