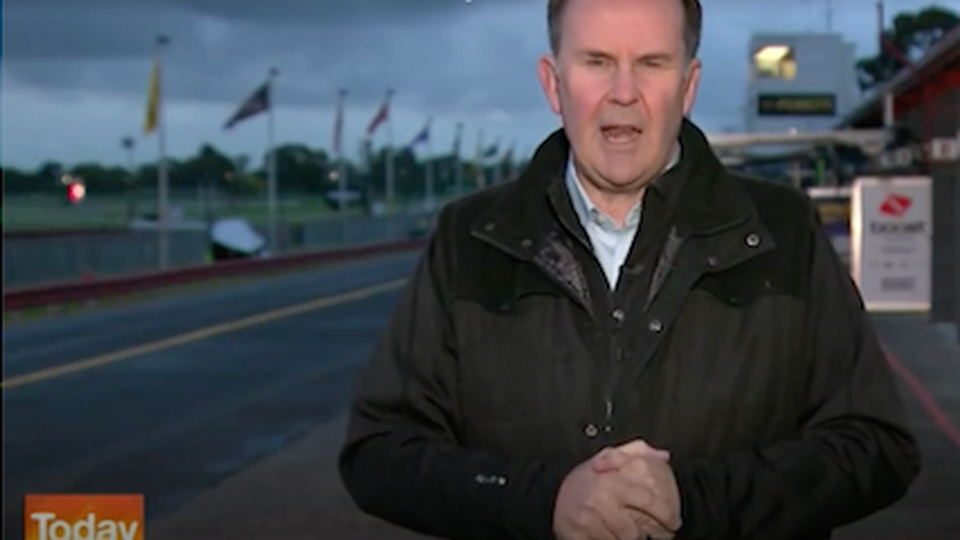 The Today show’s sports presenter Tony Jones has had a sarcastic crack at his surprised co-stars in an excruciating live exchange on Friday.

Jones’ bizarre behaviour comes amid speculation Today will be revamped with a new hosting line-up in 2020. The breakfast TV flagship has been beaten soundly by Seven rival Sunrise all year.

On Thursday, Nine refused to comment on reports sacked former host Karl Stefanovic could be back in the chair in 2020 and tensions over the show’s future may be getting to staff if Jones’ sniping is a gauge.

The super awkward banter between Georgie Gardner, Deborah Knight and newsreader Tom Steinfort – all in the Sydney studio – and Jones came during a cross to the sports presenter at Sandown Racecourse in Melbourne.

He asked his colleagues what kind of Australian food could feature on a menu for French visitors, naming his own ideas as rissoles and pavlova.

Not on Jones’ watch. “Oh, you’d just go and slaughter a kangaroo, would you, Georgie?” he said.

She wasn’t up for being taken down. “Kangaroo meat is readily available across Australia. That’s not uncommon,” Gardner replied.

An unflinching Gardner wasn’t appeased by his attempt at humour: “Plenty do.”

Sensing things were derailing, Knight tried to chivvy Jones along by asking if he had his cavoodle Archie with him.

“Deb, we’re at a racetrack,” Jones said, trying to smile.

“Probably not a great idea to bring the dog, I wouldn’t have thought.”

When Knight told the sports reporter having his dog there might have cheered him up, Jones went on the front foot again.

“I’m in a great mood. It’s Friday. I’m in a fantastic mood. I’ve just loved being here,” he said, waving an arm at the dark racecourse.

When Jones vanished from screen, the discombobulated Sydney trio sat in silence before Gardner sided with Knight.

“I could see where you were going, it was actually a very good idea,” she said.

When the new Today lineup launched in January, Jones was lambasted for several on-air incidents during the Australian Open.

“So many people come from so many different parts of the world. It’s like our own little Europe for two weeks,” he told viewers.

“There’s a fair few people from Asia as well here,” chimed in Steinfort.

Jones thought for a second: “OK, there’s some Asians here as well, Tom.”

He infuriated tennis fans during an interview with Japanese star Naomi Osaka after she beat Petra Kvitova in the women’s singles final.

Jones told Osaka to smile, questioned her nationality and suggested she “pump” some of the $4.1 million prize money into the local economy after commenting on the champion being able to hold her new trophy.

“It is a very, very big trophy. I’m not sure how you carried it all this way,” Jones said. “There’s the smile.”

His bitter approach to his colleagues on Friday drew comment on social media.

“Why Tony Jones was ever cast on the Today show team in the first place is a noodle-scratcher. So not the right fit. This interaction proves just that,” wrote one Twitter user.

Nine had no comment when asked by The New Daily why Jones appeared crabby.

‘I am not afraid’: The modern unknown soldier risks it all in Ukraine
Greens sign up for Labor’s looming jobs-and-skills summit as Liberals stick with boycott
Joe Biden’s $430b green victory for the environment
China cementing its Thailand ties with joint military exercises
NRL: Titans frantic to end 10-game losing streak as Manly showdown looms
AFL: Western Bulldogs cling to finals hopes after GWS thriller
Karl Stefanovic should return to Today and here’s why
Today's Stories