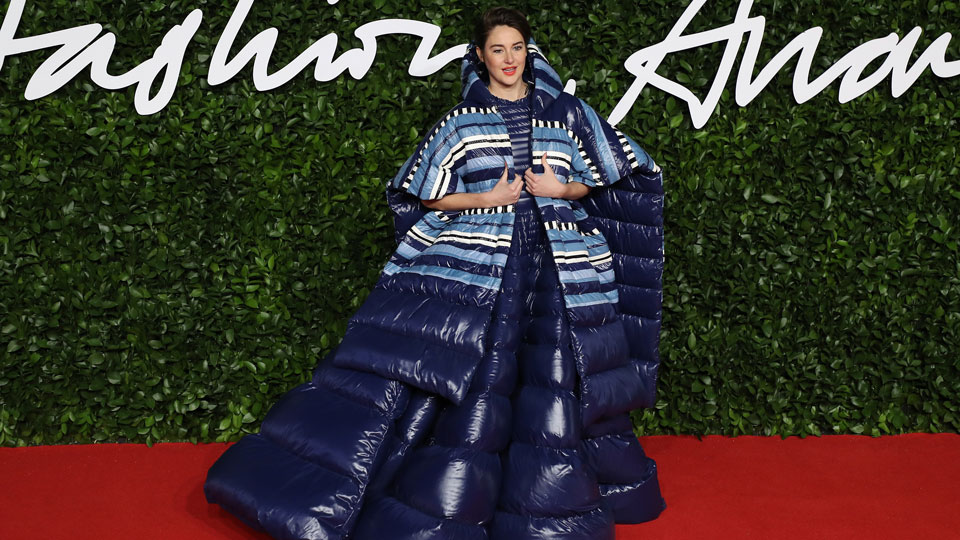 Did she lose a bet?

Shailene Woodley was in a class of her own at the Fashion Awards 2019 in London, rocking up to the prestigious event in a puffer dress.

The quilted number came with a matching striped jacket with a hood that Woodley gamely pulled up as she turned heads on the red carpet, looking like a 1970s winter Olympian crossed with a Nordic Miss Universe contestant.

Perhaps the most unlikely part of it all was that Woodley had a puffer twin. Whether that was good or bad news for the actor isn’t known, but it made for a photo op the likes of which we may never see again.

Model Liya Kebede also showed up in a Moncler look, a puffball skirt with white Lemlem tee. She looked thrilled the entire night, posting to social media looking swaddled and warm while others shivered in traditional formal garb.

After launching Fenty Maison in May, Rihanna (wearing her label in seafoam green) won the urban luxe prize.

As you would expect from the Fashion Awards, most guests including Naomi Watts and Cate Blanchett looked incredible, with not so basic black a standout on Alexa Chung and Barbara Palvin.

Then there were those who did a Shailene and pushed the envelope.

Noomi Rapace appeared to have been influenced, in no particular order, by KISS, Willy Wonka, the Cat in the Hat and theatrical Cossacks.

Rita Ora wore a fun swirl of a column gown and the world’s most right now shoes after having her make-up done by an enthusiastic toddler.

Emilia Clarke made a dramatic entrance. Beautiful (but is the hem safety-pinned up?)

Donatella Versace was as in-your-face slinky as always in a sheath dress with musk stick overtones.

Julia Roberts hung out with Mr Armani in a look that was everything.

Alicia Silverstone, who knew under that weekend surfer hair you are a total fashionista?

Cate Blanchett (who was also squired and dressed by Giorgio Armani) was perfection. Modern, modest, sexy as hell.

Irina Shayk meshed a Pride and Prejudice bodice with an obvious modern skirt with a shade known universally as ‘school shorts’.