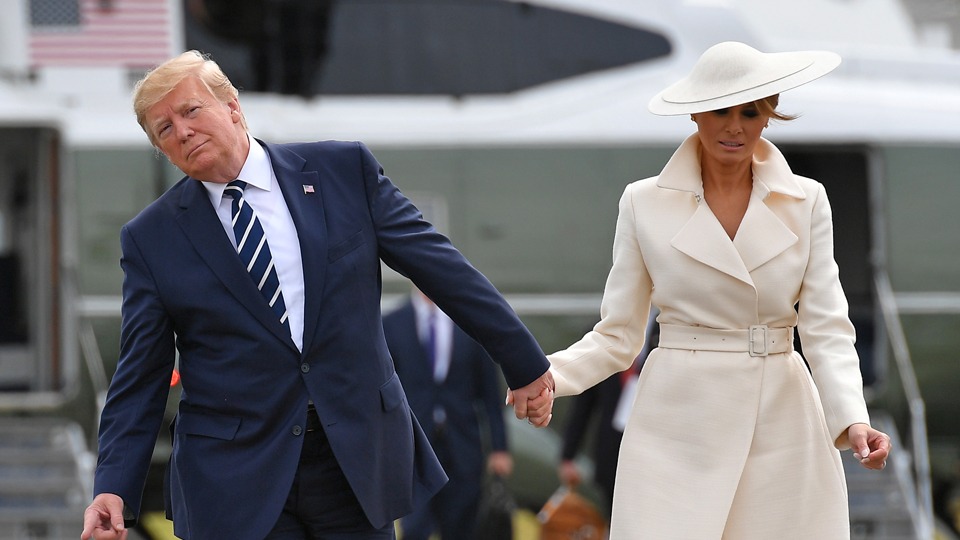 Donald and Melania Trump in Portsmouth for the 75th anniversary of D-Day on June 5. Photo: Getty

Meeting British PM Theresa May on June 4, Melania Trump wore a Celine coat we’ve seen before, and a bag we haven’t – an Hermes Birkin bag which Christies experts valued at over $107,000.

Hollywood celebrities, not first ladies, carry status bags like Birkins. It’s unfamiliar ground for a diplomat but firmly on brand for Melania.

Her fashion message on the Trumps’ state visit to the UK and France seemed to be she’s beyond rich and wants us all to know it.

She certainly ignored the unwritten rule that first ladies and royalty wear designers from their host nations on official visits.

Most of her wardrobe was from French couture houses, which was fine when she was in Normandy on June 6 and wore a Dior coat dress and Roger Vivier shoes.

Less fine when she was in the UK.

Witness the scarlet Givenchy cape gown she wore to host Prince Charles and the Duchess of Cornwall for dinner on June 4. Forget costume jewellery – Melania was costume dressing, as a cashed-up cardinal.

Even before she boarded Marine One for London on June 2, Melania signalled her signature literal dressing would be elevated to a new rebellious level.

Farewelling the White House in a $4813 Gucci midi dress featuring London landmarks including Big Ben and double-decker buses. So, she gave with one hand – UK motifs – but took with the other in choosing an Italian designer. Game on.

Still, Mrs Trump took everyone by surprise when she stepped off Air Force One on Monday, dressed not as FLOTUS but as a flight attendant.

In a navy pencil skirt, shrobed blazer and Christian Louboutin court shoes, Melania looked ready to run through a safety demonstration before serving complimentary white wine. The only British touch? Her Burberry pussy-bow blouse, complete with medals printed on one side.

After a quick change, Melania again mixed style metaphors when she appeared at Buckingham Palace. In a grim Dolce & Gabbana power suit, she looked like British actor Joan Collins in a 1980s scene from Dynasty.

The crowning glory was a tilted boater by her stylist Herve Pierre. The choice of the controversial Italian design duo and French-American hat guy flummoxed even hardened Melania watcher, Vanity Fair magazine.

It mused maybe the former model was paying homage to Princess Diana or showing where her Brexit loyalties lie by choosing “continental craftsmen”.

That night, Melania stepped out for the state dinner at Buckingham Palace in a haute couture dress by French label Dior.

“The diplomatic choice would have been to wear a British brand” to honour the fashion industry of her host country “as Kate so often does”, sniffed UK newspaper The Telegraph.

“Or an American one, shining a spotlight on designers in her own country, as Michelle Obama so often did.”

FLOTUS pulled out a surprise on June 5, fronting for the D-Day ceremony in Portsmouth in a coat dress by Mary-Kate and Ashley Olsen’s label The Row (Team USA) and a Philip Treacy hat (Team UK.)

The dress was demure and appropriate. The hat was compared to conical hats sold in Asian tourist markets.

But earlier that day Ivanka was judged to have her own fashion misstep, thanks to a rhinestone belt, peplum, puff sleeves and hat worn for a Westminster Abbey tour.

Touring Westminster Abbey after @POTUS and @FLOTUS laid a wreath at the Grave of the Unknown Warrior. #usstatevisit

“Ivanka’s tiny hat was unfairly compared to a maxi pad by Twitter critics, although it resembled … more of a half-assed balloon animal slapped onto her pin straight hair,” said the Daily Beast, which called the Trump women’s fashion “bonkers”.