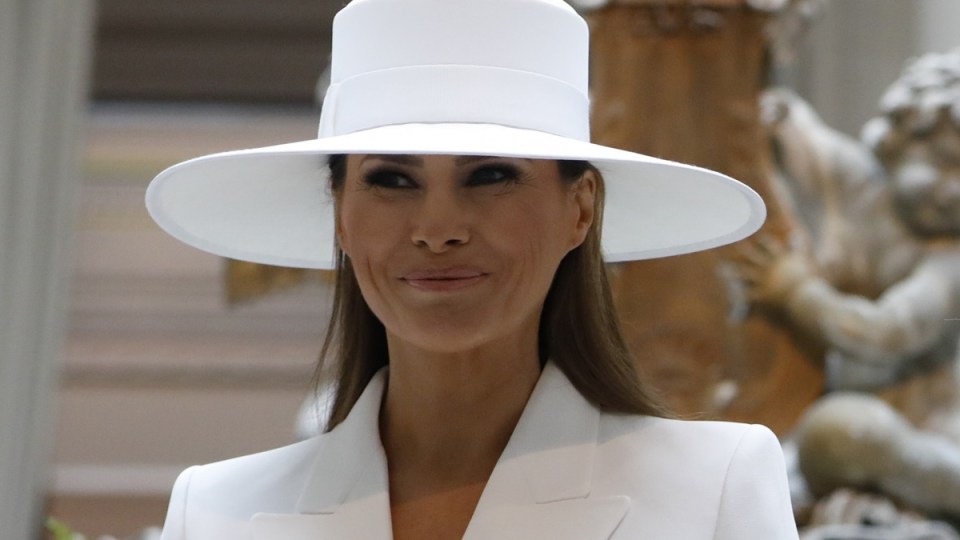 Melania Trump's clothes are her armour, but they often fail to disguise her "general air of unhappiness", Kirstie Clements writes. Photo: Getty

The Trump women have been making some pretty definite style statements in Washington this week during the visit of French president Emmanuel Macron and his wife, Brigitte Macron.

I must admit have a little bit of an obsession with Melania, trying to assess what she is communicating with her fashion choices.

I’m not in the “Poor Melania, imagine being married to him” camp because she knew what she was getting into, but going from super-sexy lingerie model to super-appropriate political wife is a not an easy path.

She seem to have landed somewhere around a perfectly painted Alexis Carrington in Dynasty, with the barely concealed disgust and ennui of a Michelle Pfeiffer in Scarface.

She knocked it out of the park in the sleeveless Chanel at dinner, but her choice of what to wear for a tree planting photo-op was intriguing.

When I hear “tree planting”, I think grass, so my go-to outfit would not include six-inch Louboutin heels, but they seem to be a constant in Melania’s wardrobe, no matter what the occasion or floor covering.

Melania has decided to eschew putting her arms in her coat sleeves, and wears them over her shoulder, an affectation of nonchalant wealth that drives me demented, but this time she chose a short cape with bare legs and vertiginous spike heels – more ‘Park Avenue lunch at Barney’s’ than ‘White House lawn’.

But her tightly belted white Michael Kors skirt-suit and hat was the outfit that truly broke the Internet.

Melania loves a hat – in her previous life she was partial to that Eastern European ‘model’ must-have, the large fur Cossack hat, and the FLOTUS baseball cap worn with mirrored aviator sunglasses and glossy lipstick is a fashion parody of Zoolander proportions and should probably be on a T-shirt.

Her white hat was a take on the traditional gaucho hat, a style worn in the early 19th century by dashing Argentinian cattle herders, who were trying to protect themselves from harsh winds.

Melania’s strict, tailored outfit choices seem to also be designed for protection, maybe from a hyper-critical press but most likely from her husband’s advances.

Melania’s strict, tailored outfit choices seem to also be designed for protection, maybe from a hyper-critical press but most likely from her husband’s advances and the unpleasant idea that he wants to make physical contact.

Melania’s general air of unhappiness tends to cloud her glamorous image. Her permanently pained expression was momentarily broken when she broke into a natural smile while seated next to Barack Obama at Barbara’s Bushes funeral, but, hey, she’s only human.

Someone who is having the time of her life in the White House, however, is the tone-deaf Ivanka Trump, first daughter and advisor to the President.

The “Honorable” Ivanka attended the state dinner for the Macrons in a $14,000 Rodarte dress that was widely panned for being too frou frou.

I personally loved the dress, but one would think that maybe, just maybe, given the fact that her father and her husband are under intense legal scrutiny, she might reign in her privilege, but nah.

Add a drop earring and a scarlet lip. If you’ve got it, flaunt it. At least until the midterms.

What Melania Trump’s hat tells us about her mental state