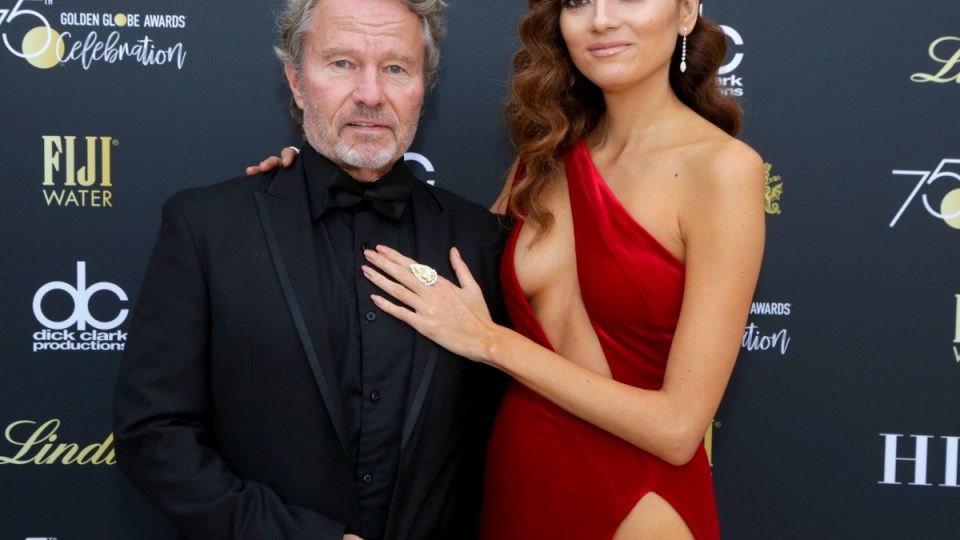 Actors John Savage and Blanca Blanco attend the Official Viewing and After Party of The Golden Globes. Photo: Getty

On a Golden Globes red carpet buried under a sea of black gowns, three women stood out for their choice not to comply with the unofficial black dress code introduced as a show of solidarity to support victims of sexual harassment in the film industry.

The Indian journalist, who is publicly supportive of the ‘Time’s Up’ movement spruiking the black dress code, said she selected her red and gold gown with floral embroidery for “cultural reasons”.

“When you have a celebration, you don’t wear black,” she said, speaking on the red carpet.

She said her mother, who was watching at home, would have been appalled if she wore black.

The dress code, which came about in response to a string of sexual misconduct allegations in Hollywood beginning with high-profile producer Harvey Weinstein, was followed by most stars – including many men – with just a few notable exceptions.

Actress Blanca Blanco took to the red carpet in a siren-red Atria Couture gown with a thigh-high slit and cut-out neckline, but said she was  “excited” about the #TimesUp movement

I love red,” the 36-year-old told Refinery 29.  “Wearing red does not mean I am against the movement.

“I applaud and stand by the courageous actresses that continue to break the cycle of abuse through their actions and fashion style choices.”

Blanco said criticism of her style choice by women who may feel she should take a public stand against sexual abuse in Hollywood “hurts my feelings. Shaming is part of the problem.”

It wasn’t the first time the former Germany’s Next Top Model contestant has been bold at an awards event. At the 2017 Oscars, the beauty accidentally flashed her crotch in a revealing dress.

Red-headed model Barbara Meier, 31, also opted to stand out in colour at the 2018 Golden Globes, wearing a sheer, floral gown with appliquéd flowers.

The dress code was announced last week as an initiative of new women’s organisation ‘Time’s Up’, endorsed by entertainment industry heavyweights such as Natalie Portman and Reese Witherspoon.

Before the event, attendees such as GLOW comedy series star Alison Brie used the hashtag #WhyWeWearBlack, calling for equity and parity across all industries.

But the limited colour palette didn’t stop stars from finding a way to stand out among their designer-clad peers.

Girls star Allison Williams’ Armani Prive gown had a hint of orange and crystal embellishment, while model Kendall Jenner made her Golden Globes debut in a Giambattista Valli gown with a show-stopping train.

Film and television actresses also brought women’s activists as their guests to the award ceremony in the hope of offering media attention to the cause while posing for red carpet photos and giving interviews.

“We’re here because Tarana started a movement,” Williams said. “We actually have the opportunity to hand our children a different world.”

Singer and actor Justin Timberlake, who attended the event with his wife, actress Jessica Biel, was among dozens of male stars who opted for black shirts and a ‘Time’s Up’ campaign badge.