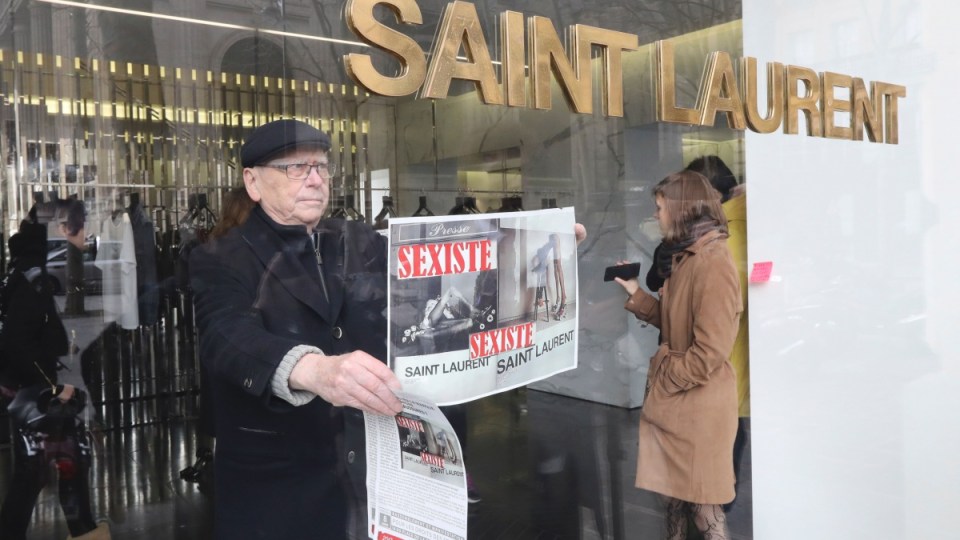 A feminist activist protests in the window of a Saint Laurent store in Paris. Photo: Getty

The late, great French couturier Yves Saint Laurent was once quoted as saying, “It pains me physically to see a woman victimized, rendered pathetic, by fashion”.

One presumes he would be turning in his grave if he had seen the house of Saint Laurent’s latest 2017 ad campaign, featuring a reed thin model, clad in a manky fur coat, lying brokenly on the ground in high-heeled roller skates, legs akimbo, her crotch exposed for all those strolling the Paris boulevards to see.

In response to public complaints, the French advertising watchdog Autorite de Regulation Professionelle de la Publicite banned the images, stating that the campaign “seriously contravenes” the advertising codes relating to “respect for decency, dignity and those prohibiting the use of submission, violence or dependence”.

What were the supposed “artistes” at Saint Laurent even thinking?

Fashion often and purposefully crosses the boundaries of good taste, for shock effect and cheap publicity mostly, but this is a new low. 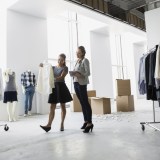 Confessions of a stylist: What I learned from dressing a stranger

What part of this image did they hope would make us rush into their stores to buy a new handbag or some ripped fishnet stockings maybe?

It was as if they wanted to tick every contentious, degrading, misogynistic box. Thin. Absolutely. Young. Check. Vulnerable. Yes. Sexually exposed. Tick. Possibly injured and unable to walk (or, on an even more sinister note, run away?)

They are clearly short on creativity and are trading purely on sensationalism.

Other fashion houses have seen ads banned over the years; Tom Ford has run into problems with several ads, including one of a nude Sophie Dahl reclining on purple satin for Opium (I rather liked it, but the general consensus was that it was too sexually intimate), another where a model sported a Gucci symbol shaved into her pubic hair.

When I edited Vogue, I made the decision to run the latter, reasoning that the readers of the magazine were sophisticated enough to make up their own minds, and I received only three reader complaints, but I also didn’t think the images were appropriate to be displayed on outdoor posters.

That sex sells fashion is a given, but a very disturbing line is crossed when images move into an area where the model is portrayed as a victim, distressed, menaced or in danger.

In my mind, one of the worst was a Dolce and Gabbana ad that appeared to be elegantly portraying a gang rape scene and which was swiftly and rightfully condemned and withdrawn.

What is the mentality that concludes a crumpled, miserable model that looks strung out and awkward and vulnerable is a symbol of high fashion?

I showed the image to husband, who made that wonderful grunt of pure disdain that French people do and said, “Booof. They’ve run out of ideas”.

Yes they’ve run out of ideas, but the result is also dangerous and demeaning to women. The opposite of what M. Saint Laurent ever intended.

Young, thin and vulnerable: When fashion ads go too far