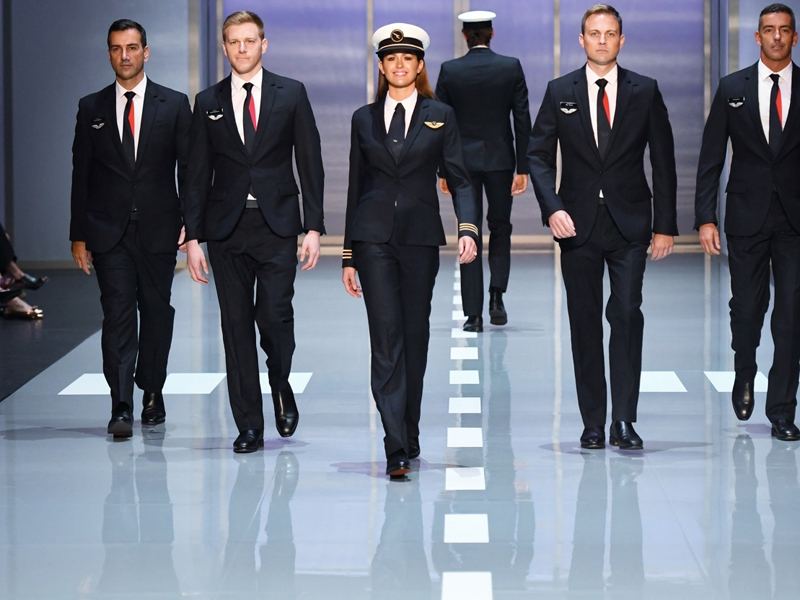 To remind us all it’s 2016 and women can operate heavy machinery, Qantas has decided to stop dressing its female pilots in male workwear.

The airline had an epiphany this year when it realised that not giving Ms Jet Pilot, who can do mental arithmetic faster than a mathematician and who flies quicker than a race car driver, her own uniform was out of step with its company-wide gender equality policy.

The outfits were unveiled at a runway show on Friday by Jesinta Campbell, a prominent Australian model and partner of AFL footballer Buddy Franklin.

The majority of comments from the women who tried out the uniform played up its femininity and shapeliness.

Given that the uniform was reportedly inspired by the original Qantas uniforms from the 1930s, the previously retrofitted male uniforms must have hung like garbage bags.

A330 pilot Debbie Slade told Fairfax Media the new outfits had “a little bit of shape”, which resulted in a “really big change”. Ouch.

The New Daily understands the female version includes a wider necktie, a modified cap, and the jackets have internal welt or jetted pockets, rather than the external flap pockets of the male jackets (and of course the buttons are on the left).

“It’s the first time their uniform has been addressed, because up until now they has been sort of squeezed into men’s uniforms,” he told Vogue.

“They actually don’t mind having a uniform that’s very close to the men’s and so I’ve just feminised it in the cut, the jacket is more fitted. Everything is more streamlined and tailored, the pants more narrow.”

CEO Alan Joyce said during the event the new uniforms were designed to “meet their needs”, which must be a reference to female pilots no longer feeling strangled by excess fabric at 30,000 feet.

“The uniform was developed in collaboration with our pilots to make sure that it meets their needs on the job, as well as perfectly capturing the power and history of the Qantas brand.”

Ms Campbell posted on Instagram that the improvement was “AWESOME”.

“Honoured to have been invited by @qantas to launch the new Pilot Uniforms. For the first time female pilots have their very own uniform … HOW AWESOME,” she wrote.

TV host Karl Stefanovic was also spotted at the event. We received no word on whether he was sporting his ‘I wore this suit for an entire year without criticism because society is sexist’ suit in solidarity.

The airline also debuted new uniforms by Martin Grant for flight attendants of both genders.

The premiere will presumably be viewed as an improvement on its 2013 fashion show, when model Miranda Kerr was restricted to wearing hostess uniforms. Because in those dark days, women apparently didn’t fly aeroplanes.

Female Qantas pilots get their own uniforms