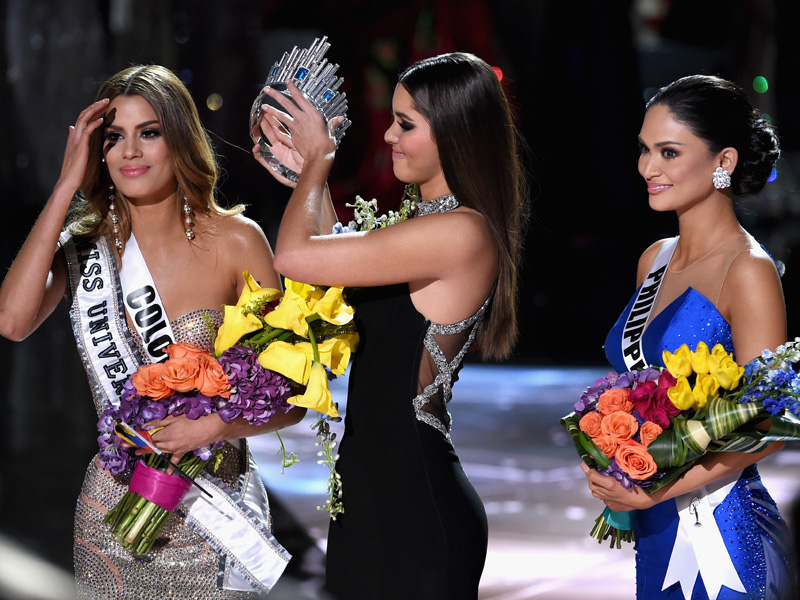 The host of the 2015 Miss Universe competition has been left red-faced after he named the wrong winner, only realising after the runner-up was crowned.

Comedian Steve Harvey told a packed audience in Las Vegas and millions watching around the world that Colombian Ariadna Gutierrez Arevalo was the winner of the event.

However, while Ms Arevalo stood with her crown and sash on stage celebrating with the audience, Mr Harvey realised his mistake.

He interrupted the celebrations to announce he’d made an error and that Philippines contestant Pia Alonzo Wurtzbach was the actual winner.

Check out the incredibly uncomfortable footage below:

Mr Harvey apologised for the “honest mistake” shortly after the controversy unfolded, in a series of tweets.

“I’d like to apologise wholeheartedly to Miss Colombia & Miss Philippines for my huge mistake. I feel terrible,” Mr Harvey said.

“Secondly, I’d like to apologise to the viewers at that I disappointed as well. Again it was an honest mistake.

“I don’t want to take away from this amazing night and pageant. As well as the wonderful contestants. They were all amazing.”

Ms Wurtzbach noted the awkwardness of receiving her award after the show: “It’s a very non-traditional crowning isn’t it, very 2015.”

Meanwhile Ms Arevalo was gracious in her unfortunate defeat.

“Everything happens for a reason so I am happy for all … having this dream I am so happy.” she said after the show.

The pageant also released a statement about the mishap it described as “human error”. While the bungled announcement was the worst moment of the night by far, there were four other shocking reasons why this Miss Universe pageant reminded us of how passe the whole thing is.

A swimsuit competition in 2015

Whether you’re for or against the controversial swimsuit component of Miss Universe, there is no doubting that it just feels very wrong.

An entire group of women being judged on how they look in a bikini? Even Playboy magazine has announced it will stop publishing nudes.

Last year a similar event – the Miss World pageant – decided to scrap the swimsuit round all together.

“The organisation has decided to take itself out of the swimsuit world because it isn’t the path they’re trying to take,” United States national director of Miss World Chris Wilmer told ABC News.

“It’s not just a beauty contest, it’s ‘beauty with a purpose’. There didn’t seem to be a purpose to have the swimsuit.”

However, once contestants are permitted to speak, it seems they’re purposefully set up to fail.

For example, Australian contestant Monika Radulovic was asked what she thinks about parts of Australia moving to legalise marijuana.

Whether she knew the topic beforehand or not, it’s a complex problem that not even an expert could do justice to in just a few lines.

“Now this topic has both positives and negatives and it’s quite debated. I believe that in certain circumstances, legalising marijuana does have definite benefits,” she said.

“It has been found to be really amazing in treating cancer and has really really helped those who are very, very sick. In that circumstance I definitely do think we should.”

Reports claimed her answer was “awkward”, but really she did the best she could and that is commendable.

Instead, Miss Radulovic and most other contestants get skewered for keeping their heads above water when answering tough questions.

Surely all the women have interesting stories, hobbies, passions or qualifications they could expand on, instead of such traps.

When it comes time for the nationality-themed costume competition things are rarely done in half-measures.

Aniporn Chalermburanawong from Thailand sported a dress that made her look like she’d been hit from behind by a Thai taxi known as a “tuk tuk”.

But nothing was worse than poor Nikoletta Nagy from Hungary, whose dress was inspired by a Rubik’s cube.

If reading out the wrong name wasn’t bad enough, Mr Harvey went one step further when he made a meal of the apology.

The Family Feud host and comedian took to Twitter to express his sorrow for the mishap, but two spelling errors turned that into a mess too.

The poor guy could not take a trick.

His original gaffe looked even worse when a photo of the piece of paper he was reading off surfaced on Twitter.

It was pretty clear who the winner was, poor Steve just got a little overwhelmed.