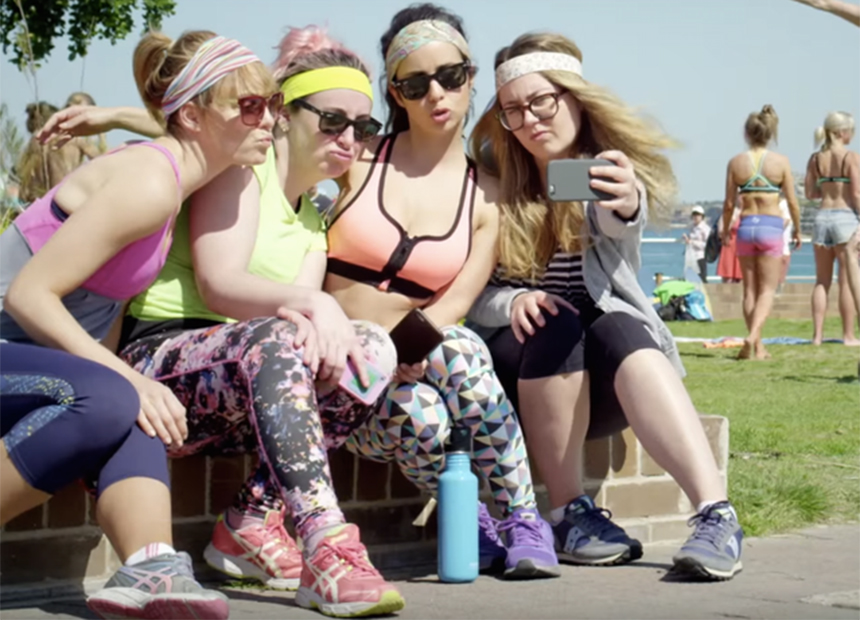 First there was the YouTube parody video. Now the research has made it official: Australians are obsessed with activewear and they’re wearing it as a fashion statement rather than gym attire.

An online survey by discount sportswear and gear retailer TheActive.com.au, found 72 per cent of Australians wear activewear when they’re not actually being active.

Comedy group Skit Box poked fun at the obsession in their Activewear video  about women wearing the gear without being active.

The video went viral (with more than 1.5 million views and counting) and was picked up by media outlets.

While the video is an extreme take on the trend, there’s evidence Skit Box aren’t actually that far off in their appraisal.

According to the new research, of the 2500 Australian men and women polled, 30 per cent wear their activewear to the supermarket, 14 per cent to a shopping mall, 13 per cent to brunch and seven per cent to work.

Ms Robinson, who also works as a personal trainer, says she’s also guilty of wearing activewear when she’s not working out.

“You’ll often find me in active wear – in the [Sydney] CBD you see it all the time now.”

The trend of non-active activewear is something Ms Robinson has noticed developing steadily over the past few years – people’s workout gear is no longer the t-shirt with holes and ill fitting sports tights – they’re dressing far more fashionably.

“There’s so many fun prints and comfy stuff that feels like it’s flattering your body,” she says.

Ms Robinson says major brands including Nike and Lululemon Athletica are leading the way with durable and well-designed technical gear appealing to both gym junkies and fashionistas wanting a comfortable outfit.

Lululemon have realised the trend releasing its &Go line last year with sporty designs that can also double as normal daywear like leggings that are fashionable enough to wear instead of jeans, skirts and dresses that can be worn to the office and handbags that double as gym bags.

Australian Retailer’s Association’s Carla Bridge says while the big US brands are certainly leading the charge, Australian activewear is holding its own.

“Australia hasn’t been lagging,” Ms Bridge says, adding that Lorna Jane can also be credited with starting the trend – especially locally – in an industry worth an estimated $2 billion in Australia.

Likewise, Cotton On Body has been exploring the activewear-as-fashion space for a few years, while online stores like StyleRunner are finding great success selling upmarket exercise clothing.

She says retail store Myer now has a strategy in place to give more floor space to athletics gear, because of the trend.

“Lots of the brands are going into it now.”

Other brands are likely to follow suit, Ms Bridge believes.

“I don’t think it’s going to slow down. It’s become quite mainstream and there’s a lot of potential growth,” she says.

While the future looks bright for activewear as fashion, Ms Robinson doesn’t think tights and tank tops will be something that will take over the nightlife styles in Australia.

“I think you’ll see limits on it – I can’t see it taking over [the fashion] in bars and clubs – well I hope I don’t see it. I draw the line at going to dinner or the pub in active wear.”

Perhaps not for women anyway. Men, however, admitted they would wear their activewear on a night out – three per cent to the pub and one per cent to dinner (women sat at zero per cent on both accounts). It’s official – we are obsessed with activewear