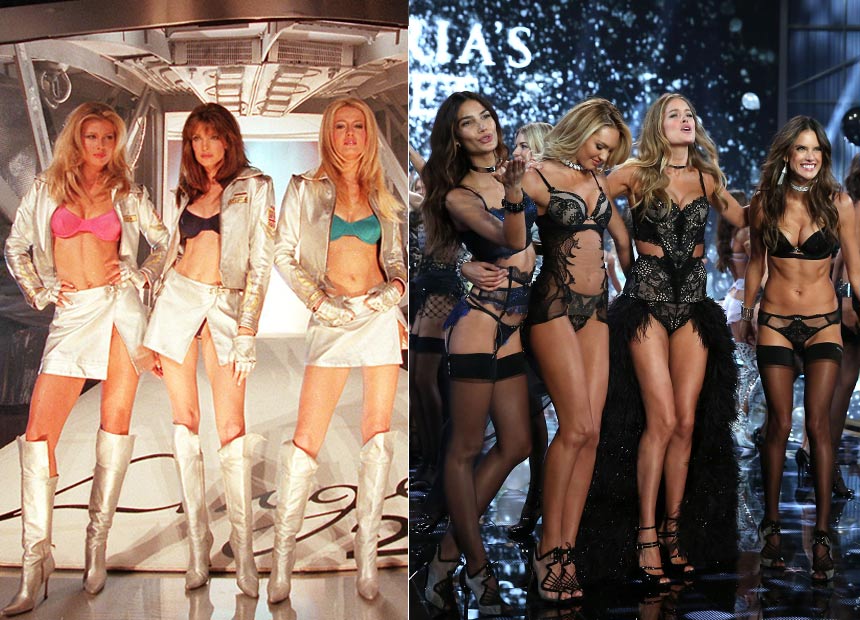 Often regarded as the pinnacle of beauty, the models of Victoria’s Secret have long been desired by men and envied by women.

• Why Kim Kardashian’s bum is a threat to us all

But how has the show, and its iconic models, transformed since its 1995 debut? And what does that say about us?

With this year’s angels hitting the catwalk in London overnight, we reflect on the major differences over 17 years of lingerie.

Underwear is underwear, but each year the line between lingerie and nudity becomes slightly more blurred. Compared to this demure get-up worn by Claudia Schiffer (above left), recent outfits are positively pornographic. Arguably unsurprising in an era where Kim Kardashian’s naked body is emblazoned across magazine covers.

While voluptuous bodies were once covetable in the hey-day of models like Tyra Banks (above left) and Laetitia Casta, today’s models would suggest that curves are out and muscle is in. Another notable change? A dramatic decrease in bra cup size – this year, nary a D cup was in sight.

A status symbol for the models and an iconic symbol for the brand, the angel wings heaped on the back of the catwalkers have grown considerably in size. Once fluffy and fun, they are now elaborate works of art that often weigh more than the models themselves.

“One year, I was almost going to wear two harps as wings,” model Candice Swanepoel revealed last year. “If I’d fallen, someone would have had to run on the stage and pick me up because I couldn’t get up on my own!”

A more natural approach to beauty was evident 15 years ago but today the show’s make-up artists embrace a “more is more” attitude.

Dutch model Bregje Heinen (above right) was buff and bronzed during the 2014 show, while Laetitia Casta (above left) showed off a lighter hue in 1999.

As if a parade of genetically blessed individuals wasn’t already enough, the show’s organisers have begun choosing musical performers based on their appearance as well as their talent.

While a then 32-year-old Mary J Blige hit the stage in 2001 wearing a fur coat and rocking her signature look, this year 24-year-old Taylor Swift took to the catwalk dressed in lingerie and looking indistinguishable from the models.

The Victoria’s Secret show: then and now