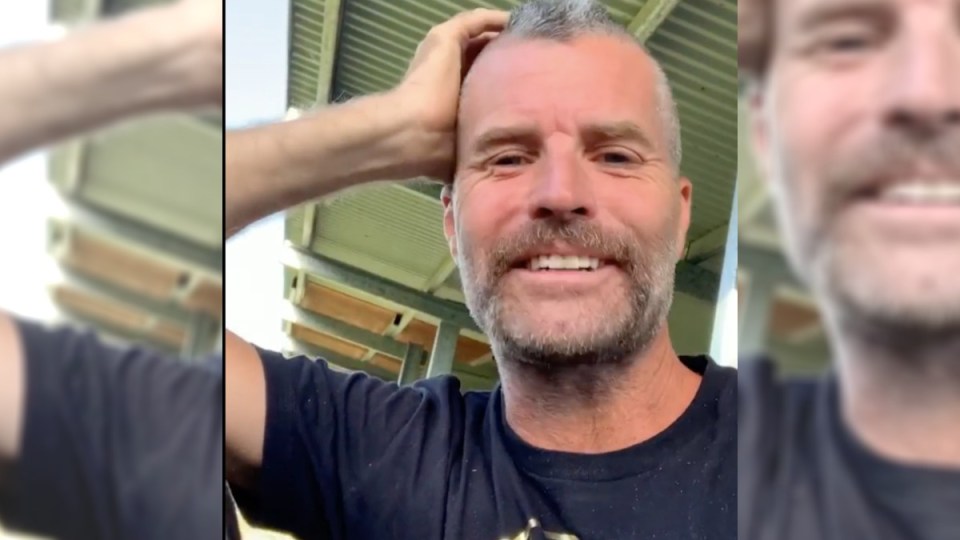 Pete Evans posted an apology on Facebook saying he was unaware of what the Black Sun symbolised. Photo: Instagram

Pete Evans lived up to his title of ‘controversial celebrity chef’ again this week when he took aim at Australia’s darling Magda Szubanski, in his latest conspiracy war against the coronavirus.

Evans has established himself as a coronavirus conspiracy theorist several times throughout the pandemic, culminating in the spruiking (and resulting disciplinary action) of a very expensive light machine.

On Tuesday in a social media post, he labelled the Victorian government’s latest COVID-19 safety ad campaign – which features Szubanski and other celebrities – “brainwashing”.

He paired it with a doctored image of the actress.

The post quickly leapt from the channels of Facebook to news sites, as Szubanski and others clapped back at Evans’ comments.

Thanks so much Lucy! ❤️❤️ It’s a small but very vocal, mobiliazed and nasty minority. The massively overwhelming response has been positive and ppl love the ads and appreciate the spirit in which they are intended. 🙏🏻😘❤️ https://t.co/v7umqlVe2n

This sort of diatribe is now commonplace from the chef and self-appointed wellness guru, who has all but ostracised himself from the standing his long-time post as My Kitchen Rules judge gave him.

Although most of society sees Evans as an outcast with kooky opinions on health and wellness, what is it that keeps us hanging on his every tweet?

It all comes down to us – not Evans, consumer psychologist Jana Bowden says.

Associate Professor Bowden explained: We (as consumers of news, information) give greater weight to negative information rather than positive.

“We place a greater emphasis on negative stories – they grab attention, lead to content engagement and remain in collective memory longer than positive information,” she told The New Daily.

“This partly explains why we see significant sharing of stories such as this, and the reposting of content commentary and stories related to it.”

The mystery of the pyramid (schemes)

As well as running unqualified virology advice, this week Evans delved into the murky waters of multi-level marketing, joining the ranks of maligned essential oils company doTERRA, which has itself this year been slapped over the wrist for saying its oils can help combat COVID-19.

In the promos, Evans has stopped short of endorsing similar claims, but he is no stranger to purporting false wellness.

Doing a spot of filming today for an upcoming exciting project with @doterra Stay tuned for more information. This was grilled wild fish with a chicken broth conatining ginger and lime essential oils and watercress from the garden and a splash of heal fire tonic for good measure ✌️🌈❤️ check their website for more info.

So does he really believe what he’s selling, or is he just a clever businessman who knows when he’s got a captive audience?

We might never know for sure, La Trobe University’s Mathew Marques said.

“If we are to take him at his word, then we might think he believes everything he’s saying and promoting,” said Dr Marques, a social psychologist with a focus on conspiracy theories and ideologies.

“People have a right to be sceptical of someone operating a business model selling unfounded treatments or devices. So I’d say it’s equally likely he’s just grifting – that is, cultivating and profiting off an audience during the pandemic.”

Evans burst into the public’s consciousness in 2010 when he was appointed a judge on My Kitchen Rules. His irrefutable good looks and passion for food made him a household favourite.

Already the author of a handful of cookbooks, he began to speak louder on his paleo lifestyle views. It was when he said in a ‘my day in a plate’ interview that he ate ‘activated almonds’ for breakfast that we started to choke on his recipes a little.

His paleo for kids cookbooks were pulled over fears they’d actually be harmful to children who ate them; he told people to stop wearing sunscreen and championed staring directly into the sun for daily periods and finally, in May, parted ways with his $800,000 job with MKR.

But by then, MKR was just holding Paleo Pete back – he had his following, pushed along by a captive audience desperate for entertainment during the pandemic lockdown.

“As a celebrity figure, I think a lot of Australians were already fascinated with him as a charismatic and likeable TV-chef-presenter,” Dr Marques said.

“The public’s fascination with him now may relate to watching, and in some cases wanting to see, a successful TV-chef fall from a great height down a rabbit hole of conspiracy theories.

“He may be Australia’s most famous casualty of the tall poppy syndrome this year.”

Given Evans’ prolific opinions broadcast on social media, it’s hard for news media to avoid him.

“It may be in the public interest to cover these stories so long as they are accompanied by facts or explanations about why these devices or therapies are bunk,” Dr Marques said.

So in the interests of public safety: Pete Evans is not a doctor, qualified nutritionist, virologist or medical professional of any kind. He is a chef.

And perhaps, a very savvy businessman.

Pete Evans’ outrageous claims keep us coming back for more