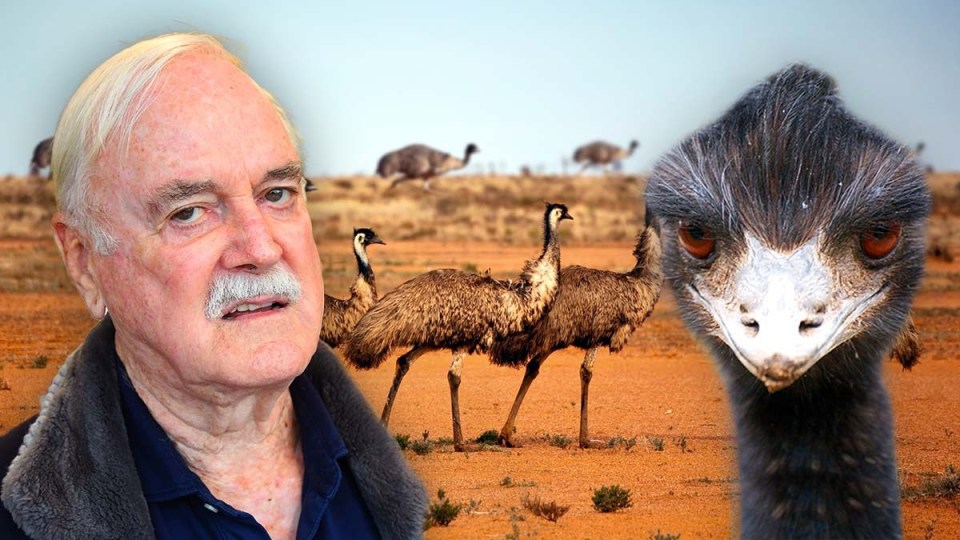 The ridiculous true story of a military battle against a flock of flightless birds will bring comedic legend John Cleese to Australian shores.

Cleese, of Monty Python fame, will star in The Great Emu War, a comedy inspired by the Australian Army’s 1932 attempt to cull wild emus in Western Australia.

An attempt that famously – and hilariously – failed.

“It’s a very funny idea, so that’s why I’m here,” Cleese told The One Show in March.

Cleese wears many hats and this project is no different – he also co-wrote the script with Deuce Bigalow star Rob Schneider and Australian comedian Monty Franklin.

Franklin performed a stand-up set about the absurd moment in Australia’s military history and in 2018 completed a script with Schneider.

In January, Schneider declared Cleese was aboard and Franklin confirmed the news with a self-deprecating social media post.

“We are just putting the finishing touches on the script (and by ‘we’ I mean Mr Schneider and Mr Cleese are coming up with brilliance while I quietly try to not embarrass myself)”, Franklin wrote on Instagram.

The film will be co-produced by Noongar woman Kylie Bracknell (Irreverent) and directed by Yaniv Raz (Dr Bird’s Advice for Sad Poets), according to The Hollywood Reporter.

“It is audacious and fitting that the first big Hollywood film on Noongar land is a comedy celebrating how Country itself can turn the tables on imperialism,” Bracknell told the publication.

Meanwhile, Raz said he “couldn’t be more delighted” about the project.

“I am grateful that our wise emu overlords have seen fit to allow me the opportunity to blend satire with slapstick and tell a poignant story about humanity’s war against nature,” Raz said.

The producers remain on the hunt for a female lead, a role promising to deliver a mysterious something Bracknell says has never been seen in a feature film.

As one Twitter user pointed out, it’s hard to imagine “what has gone wrong to cause a war” with the peaceful emu.

The year was 1932 and a 20,000-strong population of emu was busy decimating farmland across WA.

Fed up with the damage, farmers petitioned the Minister of Defence George Pearce for help – which he sent in the form of troops and machine guns.

Hope of a quick victory was soon abandoned when the army discovered that although they couldn’t take to the skies, the birds flew on their feet.

“If we had a military division with the bullet-carrying capacity of these birds it would face any army in the world – they can face machine guns with the invulnerability of tanks,” Major Meredith said.

The first battle was over within a week, with reports totalling the number of emus killed was between 50 to 200.

Not what you’d call a raging success.

In the words of Cleese: “It really happened. They tried to kill them and they couldn’t.”

In this case, the Fawlty Towers star appears delighted to mention the war.

Production is set to begin in 2022, which is also when a similar project is set to air.

In case you were wondering ‘why has no one thought to capitalise on this story before?’, it turns out they have.

Screen Australia has funded a local Australian production for a YouTube comedy series based on the same unbelievable events.

Seven episodes of The Emu War are in post-production, each with a running time of nine minutes.

The absurd piece of history bringing John Cleese to Australia