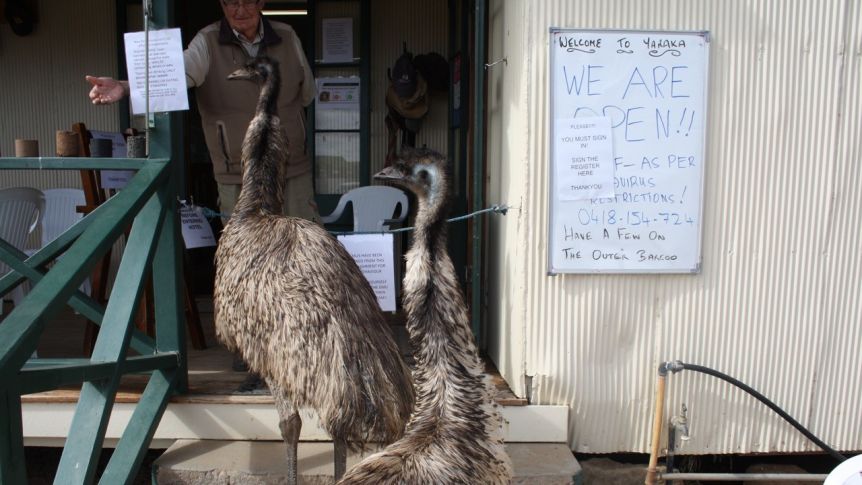 An outback Queensland pub has banned emus after a spate of bad behaviour from the feathered guests.

The Yaraka Hotel, in remote south-west Queensland, has barricaded its entrances to keep the birds out.

The emus were hatched and raised in the town and have become a tourist highlight.

But the hotel’s owner, Chris Gimblett, said they had recently learned to climb the front steps and were causing havoc.

“We didn’t really want them becoming patrons in the hotel,” he said.

“Because when they do get in here, they behave a bit badly.”

“Their toileting [inside] is not particularly pleasant,” Mr Gimblett said.

“That’s the biggest problem – because they do toilet quite frequently.”

Rope barriers have been erected at the entrances, along with signs asking tourists to help keep the emus out.

“They still hang around each gate, hoping that they’ll be able to slip in when someone opens it up,” he said.

“But so far we are winning the war.”

‘People have been killed by them’

One emu expert is not surprised by the behaviour of the birds.

Stephen Schmidt, from Try It Emu Farm in Marburg, said they would go for any easily available food.

“They’re like a chook … they’ll eat anything a chook will eat, basically,” he said.

“Even a very friendly emu can get aggressive … mainly in the breeding season,” he said.

“People have been killed by them.

“I’ve had them chase me up onto the top of the truck.”