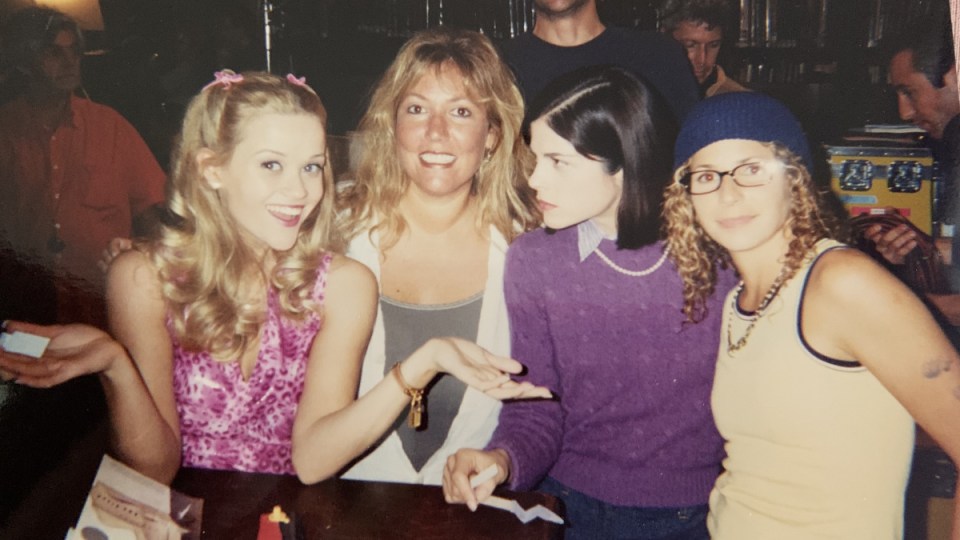 Reese Witherspoon, Karen McCullah, Selma Blair and Meredith Scott Lynn on the set of Legally Blonde, which came out 20 years ago.

In 2001, Reese Witherspoon was already on her way to becoming a household name.

But it would be the feminist masterpiece Legally Blonde that would cement her status as a Hollywood star.

Adapted from the novel of the same name by Amanda Brown, Legally Blonde follows Elle Woods (Witherspoon) from ditsy, sorority socialite to first-year law student in an effort to win back her ex-boyfriend Warner (Matthew Davis).

But what transpires next surprises everyone, including herself: The perky blonde with a tiny chihuahua named Bruiser and a flair for pink discovers she is actually cut out for the courtroom.

It has been 20 years since Elle, against all odds, got into Harvard Law, fended off a professor’s advances and came to the legal defence of a sorority alumna.

She remains an emblem for challenging stereotypes and embracing female empowerment in the face of misogyny.

By refuting the “dumb blonde” trope, Elle has become beloved for her sincerity and her insistence on unapologetically being herself.

In 2021, Legally Blonde is more relevant than ever.

Years before the #MeToo and Time’s Up movements, the Robert Luketic-directed comedy tackled workplace sexual misconduct and power dynamics.

High-profile fans like Ariana Grande and Kim Kardashian (who each paid homage to it in videos) have stoked its legacy, as have a 2003 sequel (and a third movie due next year), as well as a Broadway adaptation.

In advance of the July 13 anniversary of its release, I recently spoke with the film’s stars (including Jennifer Coolidge, Jessica Cauffiel and Davis), screenwriters and others about creating the “bend and snap,” Elle’s Harvard video essay and the movie’s enduring legacy.

Here are edited excerpts from our conversations.

The original script was much raunchier

KIRSTEN SMITH (screenwriter): We were sent a fiction manuscript by Amanda Brown (by) a couple of different producers and Marc Platt was one of them. It immediately struck us as one of the greatest movie ideas ever, and we pitched it as Clueless meets The Paper Chase, one of those law school movies from the 1970s. I might have worn a lot of pink in the meeting.

JESSICA CAUFFIEL (Margot, one of Elle’s best friends): The first script was very raunchy, to be honest, in the vein of American Pie. What we know now as Legally Blonde, and what it began as are two completely different films. It transformed from non-stop zingers that were very adult in nature to this universal story of overcoming adversity by being oneself.

KAREN McCULLAH (screenwriter): There were some differences in the manuscript. It wasn’t a murder trial, and she ended up with a professor, so we made some changes. It was a matter of finessing the details and adding a few characters, like Paulette and her friendship.

Reese Witherspoon was always the top pick for Elle, but other big names were thrown around

SMITH: (Reese) was the first person who read the script. It seemed like she was just right on the edge (of fame). We didn’t send it to any other actors.

JOSEPH MIDDLETON (casting director): We did The Man in the Moon and A Far Off Place when she was really young, so when Marc was bringing up names, and it was Reese, I already believed so strongly in her.

McCULLAH: Christina Applegate said something about how she had turned down (the role of Elle). Marc once (mentioned) Britney Spears, and I was like, “No, that’s not a good idea”. I think she hosted SNL the night before, and his kids were into her, so he threw her name out there.

JENNIFER COOLIDGE (Paulette, Elle’s new friend and manicurist): I’ve heard rumours, and I don’t know if they’re true, that Courtney Love was up for (my) role. I heard Kathy Najimy was up for it.

SMITH: I remember talk about getting Chloe Sevigny to play Vivian (a rival law student). That didn’t work out, and we ended up with our queen Selma Blair. Selma and Reese were close, because they had done Cruel Intentions together. So their friendship is a great anchor for everything.

ALI LARTER (Brooke, a fitness instructor on trial for murder): They originally wanted me to come in for one of the sorority sisters. But when I read (the script), I just loved Brooke.

There was a lot of field research done by the cast and crew: Smith and McCullah visited Stanford, while Witherspoon, Cauffiel and costume designer Sophie de Rakoff spent time with a University of Southern California sorority.

SMITH: We went to law school for a week right during orientation time. The scene where it’s a group of new students going around in a circle talking about it was from us eavesdropping on actual law students talking to each other for the first time.

McCULLAH: The criminal law and constitutional law classes were the two that we sat in. Criminal law was pretty interesting. Constitutional law, I remember crying a few times because I was so bored. But I did start writing some of the scenes for the scripts in that class, so some good came out of it.

SOPHIE de RAKOFF (costume designer): (Reese and I) went to a sorority house for research while we were prepping. Everyone was wearing pink, so right then and there that gave us a throughline for the movie that became a huge part of the aesthetic and of Elle Woods’ personality and identity.

CAUFFIEL: We (talked) an entire sorority into going out to dinner at a Mexican restaurant. Reese offered to buy them free margaritas all night. She leans over to me as the drinks are on the way and goes, “We’re not drinking anything. We’re drinking water.” We stayed sober as they got tanked, and we took notes.

McCULLAH: There was an article somewhere that video applications became a common thing for a while (after the movie came out). We just did it because it’s way more interesting to watch than hearing someone read an application essay.

ALANNA UBACH (Serena, one of Elle’s best friends): Judge Judy is supposed to be this amazing icon that Elle absolutely adores.

McCULLAH: We wanted to shoot (Elle, Serena and Margot) chasing Judge Judy wherever she tapes her show and them being like, “Judge Judy! Judge Judy! Can we get an autograph?”

UBACH: They cut that scene. They just couldn’t get Judge Judy on board. And I thought, “Reese, what if Ryan Phillippe played a really famous judge who had his own show, and we have him on billboards.” She said, “Alanna, no one’s going to believe that my husband’s a judge. Are you kidding me?”

The idea for the “bend and snap,”the manoeuvre Elle says has a “98 per cent success rate of getting a man’s attention”, was conceived while the writers were drinking at a hotel bar.

SMITH: Marc felt like we needed a big set piece in the second act, and we kept trying to think of how we could make it around Paulette and Elle. We were like, “Should the nail salon get robbed? Is there a mystery that happens?”

McCULLAH: I was like, “What if it’s as simple as Elle teaches her a move to help her get the UPS guy.” Then Kirsten jumped off her bar stool and said, “Ooh, like this?” and she did the move. I forget which one of us said “the bend and snap,” but we probably both said it at the same time.

SMITH: Karen is like, “Did someone teach you that?” I’m like, “No I made it up right now.” Then we went to Marc’s office, and I did the move. Toni Basil ended up becoming involved as a choreographer because once Robert read it, he got really excited to turn it into a full musical number. So, I found myself going to Toni’s studio and teaching her and a bunch of dancers the “step” I made up.

TONI BASIL (choreographer): I choreographed iconic things for David Bowie and Tina Turner. People interview me and they go, “You did the ‘bend and snap?” It’s like, what, a 1 1/2-minute number in the movie? But it was such an integral part.

ANTHONY RICHMOND (cinematographer): She knew how she wanted to be lit. I had two sets of lights where I wanted them and one set where she wanted them, so she could look at herself in the mirror. I would dim one set down slowly and bring my own ones up so she never knew it was being changed.

DE RAKOFF: She was obsessed with light. When I went through the fitting at her house, and we were talking about the courtroom scene, she was like, “I need to wear this hat”. It was a big, black straw hat; inside of that giant brim had a second layer of white straw that the light would bounce off so that she could get more bounce on her face. She basically created her own hat that had a built-in bounce board.

COOLIDGE: All I know is she didn’t need her own lighting. She looks strangely youthful and sexy. Her face and her tiny hands, she made a deal with the devil. She looks like a billion bucks.

Some of the cast had real-life crushes during filming

UBACH: I discovered that (Matthew had a crush on Selma) during the trial scene. We could see that heart beating every time he was around her. He was so nervous, and I thought, “How could someone looking like that be as nervous as he is?”

MATTHEW DAVIS: I’ll adore her till the day I die. I will always cherish her taking care of me and looking after me because I was so damn green.

COOLIDGE: I had a crush on (Bruce Thomas, who played) my UPS man. But he was married and had a beautiful wife and children, so I had to shut that off. I didn’t have to act or get excited when he walked in – it was all true to life.

CAUFFIEL: Everybody had a crush on Luke, but Luke was dating two supermodels at the time.

SMITH: It was the right feminist message and character to land when it did. It wears its desires on its sleeve: The contradiction (that) you can be a woman who’s fighting to be heard with a very clear point of view, who’s very strong and smart and also funny, fun and interested in different things, fashion and the law.

DAVIS: I’m certainly biased, and this might sound hyperbolic, but I think Legally Blonde was one of the last great films in the sense that we shot it on 35 millimetre. It really captured the spirit, the grandeur and the magic of Hollywood. Reese is such a magnetic superstar, and it was a showpiece for her. I think we really captured lightning in a bottle.

LARTER: You see this undeniable force, and that (Elle) never lets her self-doubt take her down. When you watch a movie like this, you believe in yourself a little bit more.

BASIL: (The movie) is more relevant in a deeper way now than ever before. Women, equal pay and the #MeToo movement, so much has come around in the last 20 years that did not exist when these girls were creating this movie.