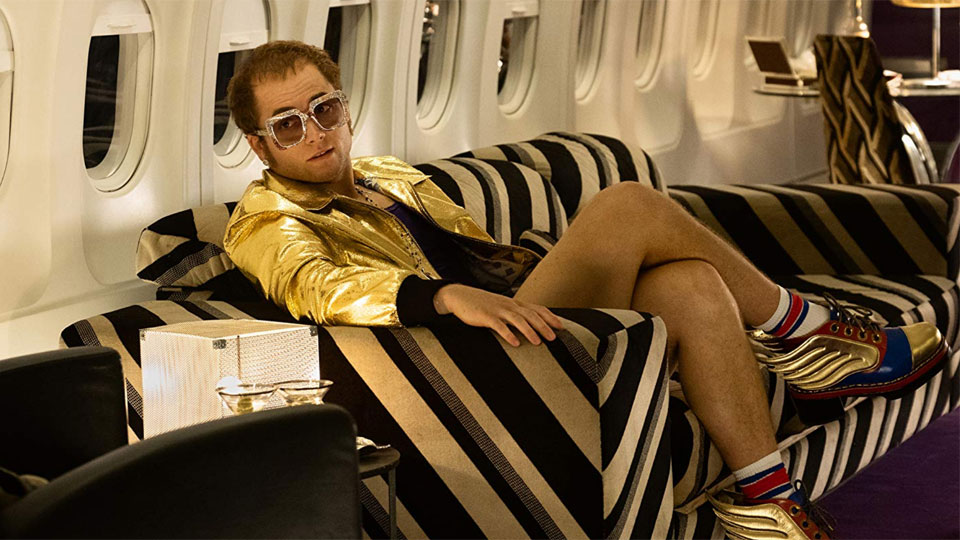 Taron Egerton as Elton John in the high-flying days that led to a downward spiral. Photo: Paramount Pictures

True, both films adhere to a formula – ‘sensitive’ child from humble beginnings finds validation and release through music, exploding onto the scene before spiralling downwards into booze, drugs and sex before finding redemption through love.

Bohemian Rhapsody charted the story of Freddie Mercury and Queen almost as if it were narrating a military campaign – the obsessive genius who invaded pop culture through a series of masterful tactical moves, culminating in what was virtually Henry V’s St Crispin’s Day speech during Queen’s Live Aid performance at Wembley Stadium.

Rocketman takes another route and ultimately a more successful one.

Rather than a straightforward rise-fall-and-rise narrative, Rocketman engages the audience with what was taking place in Elton’s head as he struggled with distant parents, his sexuality and fame’s trappings.

By framing Elton’s story within the device of his confessions to an addicts’ therapy session, Fletcher and Billy Elliot screenwriter Lee Hall deliver their saga through a series of musical vignettes that explode onto the screen like classic Hollywood.

From Elton’s beginnings as a Teddy Boy pub musician (Saturday Night’s Alright for Fighting) to his near-fatal struggle with addiction (Rocket Man) the story unfolds as a tidal channel for the tsunami of musical creativity unleashed through Elton finding his lyrical muse (and the great platonic love of his life) in Bernie Taupin.

For the most part this works perfectly.

The audience is borne aloft on a wave of exuberance that peaks early (as Elton’s career did) with a transcendent performance of Crocodile Rock at the LA Troubadour that climaxes with the singer and the audience floating above the stage.

From there, the story lurches more predictably towards the perils of success. Elton embarks on a professional and romantic relationship with predatory producer John Reid, losing control of his creative processes to corporate demands.

Rocketman is much less coy than Bohemian Rhapsody in depicting the sexual side of Elton’s flamboyance. But like Bohemian Rhapsody, Rocketman lags in the third act as the writer/director/performers struggle to say something original about the perilous sex, drugs and rock’n’roll journey.

Clearly producer (and Sir Elton’s husband) David Furnish’s hands are all over this production, and that’s a good thing.

The bitchy impatience with any mundanities that define Elton’s career rescues the narrative during these lulls.

You can almost hear a voiceover demanding, “Well that’s enough of that nonsense. It’s time for another musical number.”

As Elton, Taron Egerton doesn’t quite inhabit his role to the chameleon-like extent Rami Malek did. But he captures perfectly the joyful flamboyance that sat alongside his profound vulnerability.

To Elton’s (and Furnish’s credit) they don’t blink at showing the unattractive aspects of his character. Whereas with the originally cast Tom Hardy this might have risked estranging the audience through Elton’s lapses into self-pity and cruelty, Egerton is enough of a likeable performing presence that we stay with him.

The other performances are fine, particularly Jamie Bell as Taupin, a bedrock of unconditional support throughout his songwriting partner’s struggles. Bryce Dallas Howard is a fierce, if one-dimensional, foil as Elton’s life-long rival, his mother Sheila.

Richard Madden’s role of Reid is awash with moustache-twirling malevolence, but he’s effective in depicting the complex life of the parasite in feeding off its host while keeping it alive.

The movie ends with the release of 1983’s Too Low for Zero, whose first single I’m Still Standing is a paean to Elton’s life and career emerging from the wreckage of the previous decade.

Perhaps that’s just as well. Now in his 70s, Sir Elton is a married father of two whose event concerts at venues like Las Vegas’s Caesars Palace redefine the term ‘baroque’ (I saw him there myself).

But in his prime, with his unapologetic camp, high-energy performances and seemingly endless hits, he dominated transatlantic music like no one since The Beatles.

Rocketman tells that part of Sir Elton’s story exactly as he would have it and exactly as the legions of fans who took the journey with him deserve.

Rocketman premieres nationally on May 30.

Why Rocketman is so much better than Bohemian Rhapsody