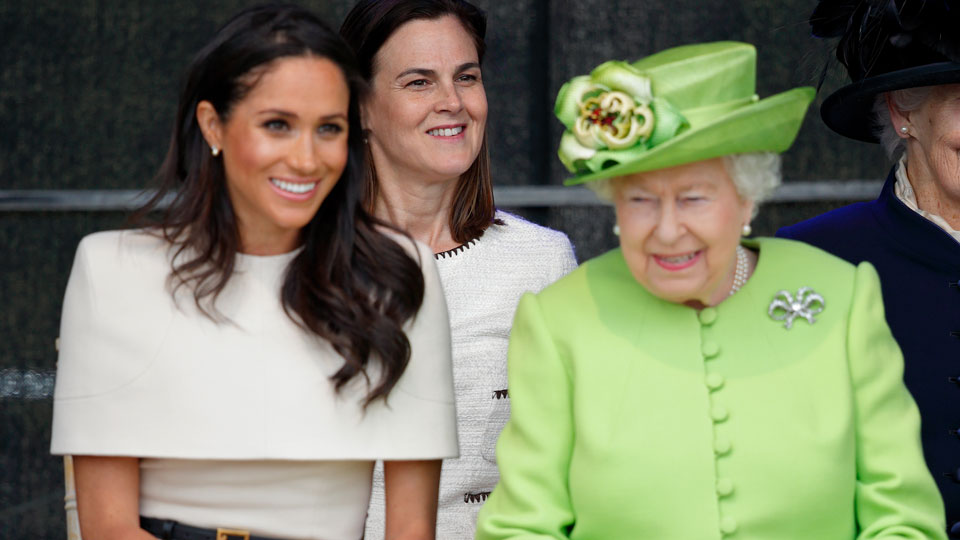 Meghan Markle and Queen Elizabeth on a joint engagement in Cheshire in June 2018. Photo: Getty

The bombshell decision by Prince Harry and Meghan Markle to ‘step back’ as senior royals without consulting the Queen, the Prince of Wales or the Duke of Cambridge is said to have “hurt” and “deeply disappointed” the monarch.

Prince William, now left more than ever holding the duty bag, is reportedly “incandescent with rage” and Meghan has been compared to another American divorcee who upended the royals, Wallis Simpson.

Harry and Meghan’s “unprecedented” statement on Thursday morning (Australian time) “pressed the nuclear button”, said the Daily Mail, which reported other royals first heard about it via TV news.

It is “a declaration of war” said The Sun, which was the first outlet to break the story on Tuesday that the Sussexes were considering a semi-permanent move to North America, probably Canada.

“Their statement was not cleared with anyone. It breaks all protocol. This is a declaration of war on the family,” a senior courtier said.

“There is fury over how they’ve done this without any thought for the implications for the institution. The Queen is deeply upset. The Prince of Wales and Duke of Cambridge are incandescent with rage.

“Courtiers can’t believe it. There are so many unanswered questions but they’ve just up and done it without a thought for anyone else.”

Meghan and Harry had only “very recently” aired their intentions with the Windsors, according to The Telegraph.

It reported aides stressed the announcement of the “progressive new role” was “personal” and did not have Buckingham Palace approval.

The Queen’s terse response came in a statement almost two hours after the Sussexes went public:

A statement from Buckingham Palace regarding The Duke and Duchess of Sussex. https://t.co/1qtTEHiIq6

“It indicates a real strength of feeling in the palace – maybe not so much about what has been done but about how it has been done.

“This is clearly a major rift between Harry and Meghan on one part, and the rest of the royal family on the other.”

The decision represents “a breakdown in the royal family”, said former palace press secretary Dickie Arbiter: “Harry was an absolute bonus to the royal family. Something has gone wrong.”

“After many months of reflection and internal discussions, we have chosen to make a transition this year in starting to carve out a progressive new role within this institution. We intend to step back as ‘senior’ members of the Royal Family and work to become financially independent, while continuing to fully support Her Majesty The Queen. It is with your encouragement, particularly over the last few years, that we feel prepared to make this adjustment. We now plan to balance our time between the United Kingdom and North America, continuing to honour our duty to The Queen, the Commonwealth, and our patronages. This geographic balance will enable us to raise our son with an appreciation for the royal tradition into which he was born, while also providing our family with the space to focus on the next chapter, including the launch of our new charitable entity. We look forward to sharing the full details of this exciting next step in due course, as we continue to collaborate with Her Majesty The Queen, The Prince of Wales, The Duke of Cambridge and all relevant parties. Until then, please accept our deepest thanks for your continued support.” – The Duke and Duchess of Sussex For more information, please visit sussexroyal.com (link in bio) Image © PA

In screeds of information published in a Q&A format on their new site, Meghan and Harry said they want to make their own money – “transition to a new working model” – while keeping their HRH titles.

They said they also want to keep Frogmore Cottage in Windsor as their UK base and their security will still be paid for by the British taxpayer.

They will “fly the flag” for the royals “as called upon”, they said. Their official travel on behalf of the Queen will be paid for by the Sovereign Trust.

The couple also announced they are cutting ties with the “royal rota” which lets mainstream media organisations share access to official engagements. Instead, they will hand-pick outlets while releasing photos and information via their social media platforms.

The Queen, still dealing with Prince Philip’s illness over Christmas and the Duke of York’s pariah status over his relationship with late pedophile Jeffrey Epstein, “will be absolutely devastated” royals reporter and author Phil Dampier told The Telegraph.

“She is very fond of Harry but however you want to dress it up, this is them stepping away from royal duties and ducking out.

“This will bring back echoes of 1936 when another American divorcee wreaked havoc in the Royal Family.”

There is “shock” in the royal households, a source told the Daily Mail.

“What more did they want?”

The Mail claimed it was told the pair created the new website without the knowledge of their UK-based press team.

“The level of deceit has been staggering. Everyone from the top of the royal household to the bottom feels like they have been stabbed in the back”, a source said.