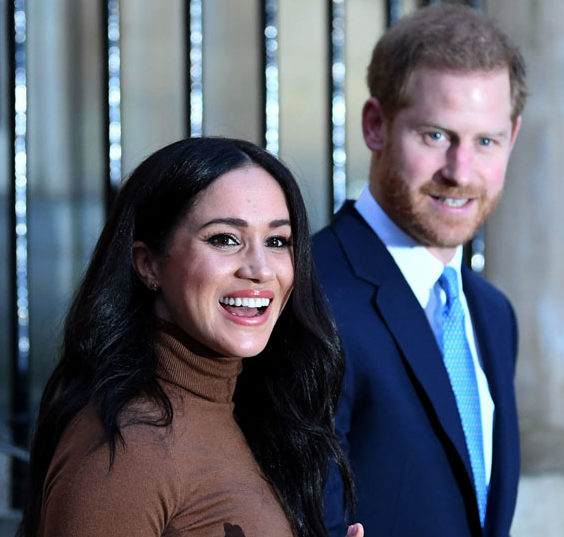 Stepping out of their car in London’s Trafalgar Square on January 6 for their first official engagement since November, Meghan Markle and Prince Harry seamlessly swung back into action.

She looked picture-perfect glossy in a Massimo Dutti jumper and satin midi skirt with Reiss coat. He was smiling. And they couldn’t keep their hands off each other.

So, same old, same old. But even as the Duke and Duchess of Sussex were clocking back on to their royal life, they were on the cusp of making the unprecedented announcement they are to “step back as senior members of the royal family.”

The royal couple said on Thursday morning (Australian time) they are making plans to split their time between the UK and North America.

“After many months of reflection and internal discussions, we have chosen to make a transition this year in starting to carve out a progressive new role within this institution,” the Duke and Duchess of Sussex wrote on Instagram.

They will “work to become financially independent, while continuing to fully support Her Majesty The Queen.

“It is with your encouragement, particularly over the last few years, that we feel prepared to make this adjustment.”

But in a statement that appeared to contradict Meghan and Harry’s announcement, Buckingham Palace said discussions on the issue of the couple stepping back from senior responsibilities remained “at an early stage”.

“We understand their desire to take a different approach, but these are complicated issues that will take time to work through,” a palace spokesperson said.

While the pair, with son Archie, 9 months, will “balance” living between two continents, they will continue “to honour our duty to The Queen, the Commonwealth, and our patronages.

“This geographic balance will enable us to raise our son with an appreciation for the royal tradition into which he was born, while also providing our family with the space to focus on the next chapter, including the launch of our new charitable entity.”

Harry and Meghan said they would share further details of “this exciting step” in due course, “as we continue to collaborate with Her Majesty The Queen, The Prince of Wales, The Duke of Cambridge and all relevant parties.”

The statement, accompanied by a photo of the pair’s engagement in November 2017, was signed the Duke and Duchess of Sussex.

A day earlier, Buckingham Palace was forced to dismiss as “speculation” that Meghan and Harry had enjoyed their recent almost two month trip to Canada so much they were planning a more permanent move.

During their break, the couple took Archie for a Vancouver Island getaway at a $20 million, eight-bedroom mansion borrowed from a wealthy mystery benefactor.

They weren’t photographed once (although they posted their own New Year shot of Harry and his little boy) and enjoyed their privacy so much they want more of it, according to The Sun.

The couple is looking to move to Canada – where Meghan lived for seven years while filming Suits – for a “significant” chunk of the year as they “actively consider their future role in the royal family,” claimed the UK outlet.

“Long-term options being floated include the Sussexes relinquishing their HRH titles or relocating their office to Canada.”

Harry, 35, and Meghan, 38, will kick off discussions with the Queen and Prince Philip “in the coming days” about their future direction.

Friends of the pair were quoted as saying that “everything is on the table” although “hopefully it will not come to” them ditching their titles in favor of a quieter, more private life.

Any sign of backroom tension wasn’t apparent when the duke and duchess returned to duty, although their choice of first appointment was interesting.

They visited Canada House, saying they wanted to thank Canadians for the “hospitality and support” shown to them on Vancouver Island.

Staff from the High Commission formed a welcoming committee outside, with Town and Country reporting Meghan called Vancouver “beautiful” when asked if she had a good holiday.

Today, The Duke and Duchess of Sussex visited Canada House in London to thank the High Commissioner Janice Charette and staff for the warm hospitality during their recent stay in Canada. The Duke and Duchess have a strong connection to Canada. It’s a country The Duke of Sussex has visited many times over the years and it was also home to The Duchess for seven years before she became a member of The Royal Family. Thank you Canada 🇨🇦! • Video © SussexRoyal Music © Raphael Lake

Janice Charette, the Canadian High Commissioner to the UK, said Harry and Meghan’s visit was a “chance to catch up, hear a bit about their visit to Canada and their holidays in Canada, and their impressions.”

She added she discussed with them “what they see in terms of their priorities” for 2020.

Citing homelessness and gender equality, “There’s a lot of areas where they have interests which are also priorities for Canada,” Ms Charette said.

Meghan and Harry’s first stop of the day was a private drop-in to the Hubb Community Kitchen in west London, which the duchess first visited before her wedding and collaborated with on the Together cookbook.

Whether or not more Canadian time is on the horizon, the Sussexes will be kept busy this year setting up their Sussex Royal foundation and promoting the Invictus Games, to be held in the Netherlands in May.