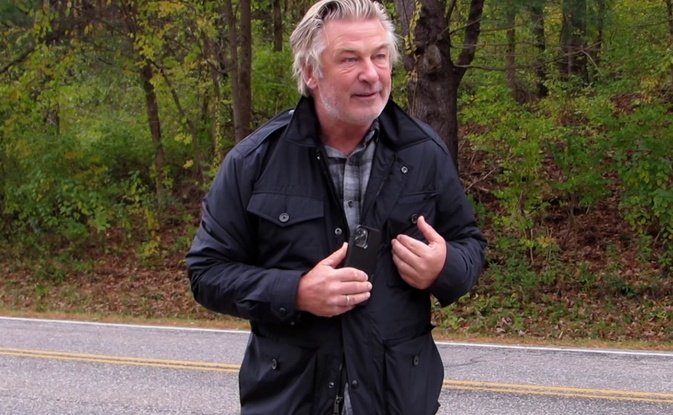 Alec Baldwin breaks his silence in a tense standoff with photographers. Photo: Twitter

Alec Baldwin has spoken publicly for the first time since accidentally killing cinematographer Halyna Hutchins, with he and his wife asking the paparazzi to leave their family alone.

An on-edge Baldwin broke his silence over the death on Saturday alongside his wife Hilaria, telling reporters that Ms Hutchins was his “friend” and that he had been in “constant contact” with the grieving family since her death.

He said he was speaking to stop photographers from following his children, who Baldwin said were “in the car crying”.

Baldwin was told by Halls, who handed him the loaded weapon, that the gun was “cold”, meaning it contained no live ammunition.

“It’s an active investigation in terms of a woman died. She was my friend,” Baldwin told paparazzi on a Vermont roadside, appearing like his wife to be recording the interaction on his phone.

“The day I arrived in Santa Fe and started shooting I took her to dinner with Joel, the director.

“We were a very, very well-oiled crew shooting a film together, and then this horrible event happened.

Baldwin said he was unable to give any information about the ongoing investigation but said he was “eagerly awaiting” the Santa Fe sheriff’s report on the death of Ms Hutchins.

He asked the media to stop following him and his family after giving an update.

“My kids are in the car crying,” Alec said.

“Because you are following them, and they know,” Hilaria interjected.

Hilaria and Alec were visibly upset when the photographer asking the questions did not know Ms Hutchins’ name.

“Halyna. Her name is Halyna. If you’re spending this much time waiting for us you should know her name,” she said.

“You don’t know her name?” Alec questioned at the same time.

Ms Baldwin tried to cut off questions about their meetings with Ms Hutchins’ family but Alec wanted to answer.

“He is in shock. He has a nine-year-old son,” Baldwin said of Mr Hutchins.

“We are in constant contact with him because we are very worried about his family and his kid.”

Baldwin also said he spoke to the police “every day”.

The Baldwins’ update comes after a string of revelations about life on the set of Rust.

Police said they had collected 500 rounds of ammunition, including a mix of live rounds, blanks and dummy bullets, and three firearms during its search warrant.

Hollywood actor Nicolas Cage also reportedly walked off the set of a previous film that employed the same armourer as Rust, 24-year-old Gutierrez-Reed.

Cage repeatedly complained about Gutierrez-Reed’s breach of protocols on the set of The Old Way, firing a gun without warning twice in three days.

Cage stormed off set and reportedly yelled at Gutierrez-Reed: “Make an announcement, you just blew my f—— eardrums out.”