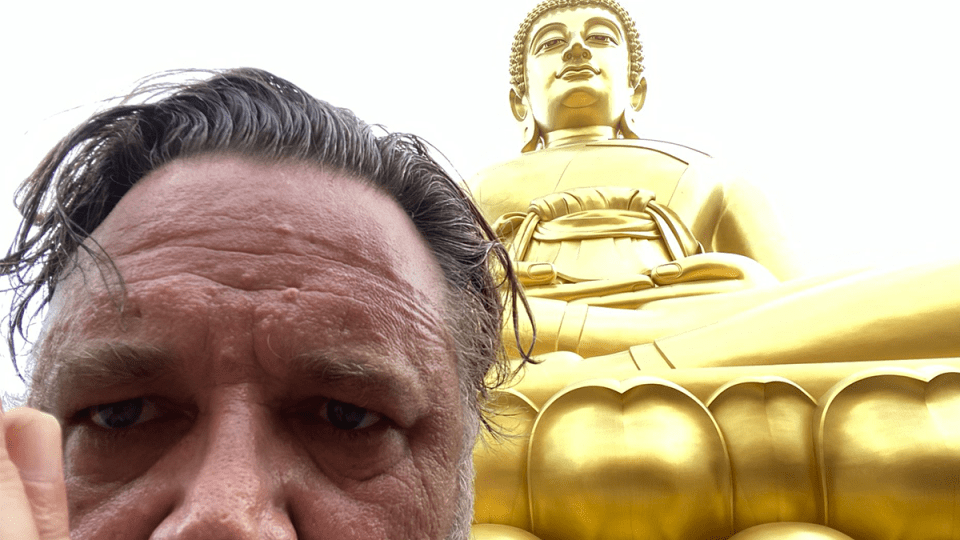 Russell Crowe has been sharing his adventures abroad in Thailand on social media. Photo: Twitter/russellcrowe

But that’s exactly what Gladiator actor Russell Crowe has achieved.

In Thailand to film Vietnam War-era blockbuster The Greatest Beer Run Ever alongside Hollywood hunk Zac Efron, Crowe has been tweeting up a storm, chronicling his time on and off set.

Crowe seemed ecstatic to be in Thailand, and shared it was his first time overseas in two years despite being one of Australia’s biggest acting talents.

It seems Crowe has mastered taking shameless selfies around town, as he let fans in on life on set, on bikes and visiting temples and majestic statues.

It looks like Rusty has been living his best life abroad and out of the confines of COVID lockdown – and we promise we’re not jealous.

In his Twitter diaries, Crowe gushed about Thailand – and encouraged Aussies to visit as soon as they could.

“Thai people are so friendly, so welcoming and, of course, the food is just amazing,” he said.

“If you’ve been locked down, if you’re feeling that wanderlust stirring in you now that we have a date for open borders, go and look at Phuket.”

And then Crowe’s passion and enthusiasm for the country caught the eye of Thai dignitaries.

Some organised a meeting with the Oscar winner to thank him for his tireless efforts to promote Thailand.

There was a ceremony and a meeting with Crowe (in slacks and thongs) that included Culture Minister Ittipol Khunpluem and the real Australian ambassador to Thailand Allan McKinnon.

Crowe was given flowers and gifts as a gesture of appreciation on behalf of Prime Minister Prayut Chan-o-cha.

In a statement, government spokesman Thanakorn Wangboonkongchana said the PM wanted to thank Crowe for promoting the country’s tourist attractions.

All of which means the co-owner of the South Sydney Rabbitohs can add ‘unofficial tourism ambassador to Thailand’ to his repertoire.

Some struggling businesses even went so far as to digitally edit his face onto pictures of their shopfronts in hopes of gaining some promotion.

Cocktail bar Teens of Thailand got in on the action, superimposing Crowe’s selfie over a photo of a feature wall at the venue.

Restaurant Freddie RiceCurry was next – although it was more honest in its approach.

“Thank you, Russell Crowe … who did not come to our restaurant,” the restaurant wrote.