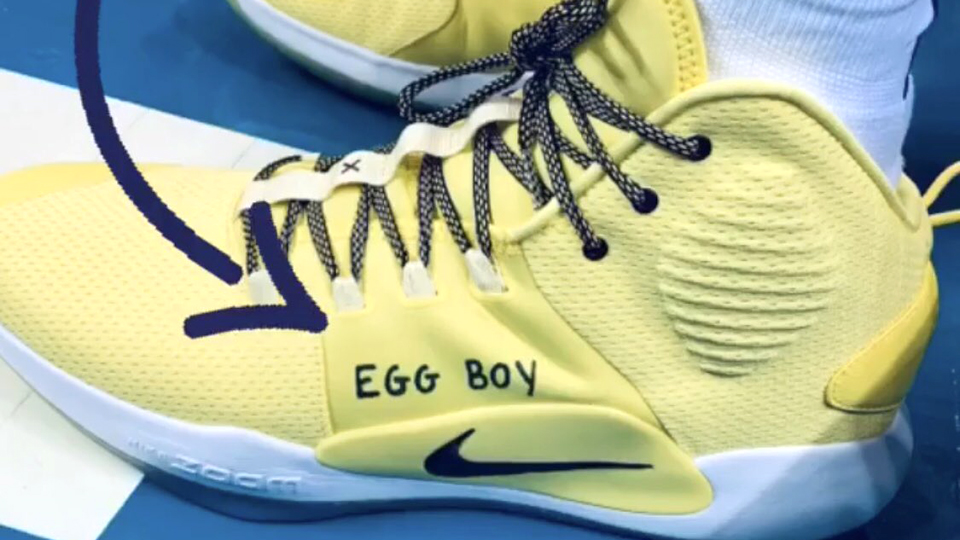 Ben Simmons' shoes in the 76ers' game in Charlotte on Tuesday. Photo: Twitter

Australian NBA star Ben Simmons has shown his support for the Melbourne teenager who egged Senator Fraser Anning, taking to the basketball court in blazing yellow shoes with “Egg Boy” scrawled across them.

Simmons rocked up to the 76ers’ clash with the Charlotte Hornets on Tuesday (US time) wearing the shoes.

It followed an outpouring of support for 17-year-old Will Connolly, who was hit in the face and tackled to the ground after hitting Senator Anning in the back of the head with an egg on Sunday.

The egging followed the Queensland politician’s claim that Muslim immigration contributed to the 50 deaths in last Friday’s Christchurch massacres.

Ben Simmons giving a shout out to Egg Boy on court for the 76ers tonight (via @pjsteinfort) pic.twitter.com/zPJMEZ7zwn

Simmons had already joined a host of athletes worldwide in offering tributes to the victims of the terror attacks in an earlier game, wearing shoes emblazoned with “Pray for NZ”.

There has also been plenty of other widespread support for the teenager who was dubbed “Egg Boy” after hitting the senator.

“The real cause of Fraser Anning getting hit with an egg is Fraser Anning saying things that prompt people to throw eggs at him,” Oliver said.

“He may be the victim today, but usually he’s a huge f—ing —hole.”

A tribute to EggBoy in Hosier Lane, Melbourne, Australia. 👏👏👏 pic.twitter.com/LcHXRAw0J8

Artworks paying tribute to the teenager’s actions have also appeared in Melbourne’s Hosier Lane and in Chippendale, in inner Sydney.

Meanwhile, Victoria Police confirmed on Tuesday that Will would not be charged, pending further investigations.

His lawyer, Peter Gordon, said he had received “no indication” that the teenager would be charged over the egging.

“But obviously police have got a job to do,” he said.

“To use Will’s own words, the police have been awesome.”

Mr Gordon also confirmed his client would not pursue legal action against Senator Anning or his supporters, who put him in a headlock.

On Monday, Senator Anning defended his actions, saying he was acting in self-defence and the teenager’s mother should have slapped her son around a long time ago.

An online crowd-funding campaign to raise money for Will’s defence had raised $70,000 by Wednesday afternoon. The teenager has said he will donate that money to the victims of the Christchurch mosque shooting.

Senator Anning faces a bipartisan censure motion for his remarks about Muslim immigration when parliament resumes next month. The Greens have gone further, saying they will try to have him suspended from parliament until the election.