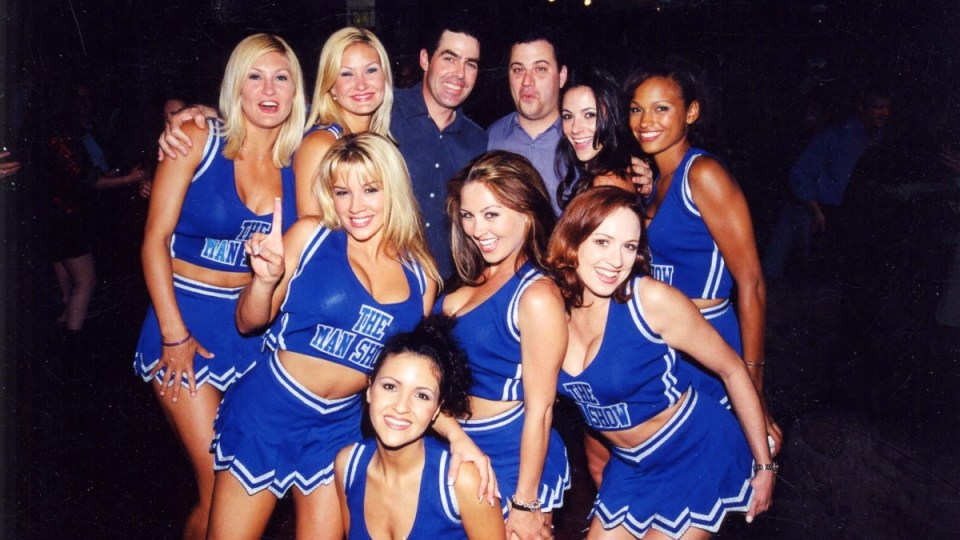 Jimmy Kimmel (back right) and his Man Show co-host Adam Carolla pose with the 'Juggy Girls' in 2000. Photo: Getty

Jimmy Kimmel may have made a show of support for Hollywood’s female empowerment movement while hosting this year’s Oscars, but his past behaviour has some questioning his commitment to the cause.

The late-night television host called time on sexual harassment in his opening monologue at Sunday’s (US time) awards ceremony, telling the audience: “We can’t let bad behaviour slide any more.

“What happened with Harvey [Weinstein] and what’s happening all over was long overdue … The world is watching us. We need to set an example.”

But before he was a household name, Kimmel, now 50, spent four years hosting The Man Show, a comedy sketch show that described itself as “a joyous celebration of chauvinism”.

Throughout his tenure on the series, Kimmel poked fun at his own wife, asked women on the street to “guess what’s in my pants” and forced a group of women named The Juggies to do his bidding while dressed in skimpy outfits.

One particularly bizarre segment involved Kimmel attempting to guess the weight of various women, pressuring them to undress in order to help him discern the exact figure.

At one point, he joked to a young woman: “I’m not even going to guess your weight. You know why? I’ve got an erection.”

When asked recently about whether his antics on the show make him cringe, Kimmel was surprisingly unashamed.

“I look back at every show I’ve ever done and cringe,” he told Vulture last year.

“But yes, of course, and not necessarily for the reasons you think. I just think, ‘Oh, we could’ve done that better’… We did a lot of funny stuff. We also did a lot of stupid stuff.”

He wasn’t averse to a reboot of the skit show either, saying: “It would absolutely result in a s–tstorm, and there’s absolutely nothing better for ratings than a s–tstorm.”

Kimmel even ventured that his past behaviour gave him “more credibility”.

“To hear someone like me talk about equal rights for homosexual people hits harder than when people hear [Ellen Degeneres] talk about it. To hear the guy from The Man Show talk about that in an inclusive way – I have some credibility.”

It’s an unusual stance from a host who regularly speaks on the big issues like gun control, US healthcare reform and, of course, #MeToo and sexual harassment in Hollywood.

Much like his Oscars opening monologue, Kimmel’s late-night monologues regularly take a strong stance and shame those who disagree with this stance.

Following the February 14 school shooting in Florida, Kimmel said on his show: “This is a mental health issue, because if you don’t think we need to do something about this, you’re obviously mentally ill.”

It’s this duality that many have argued makes him an “uncomfortable” or “hypocritical” ambassador for equality in Hollywood.

“Kimmel may have matured before Americans’ eyes; it is an evolution, however, built on his start as an irreverent prankster, ogling and giggling and refusing to take anything – politics, women, himself – seriously.”

Seriously jimmy kimmel is talking about sexual harrasment? I recall my first exposure to his "man show" and girls jumping on trampolines….. he's a hypocrite

The Man Show: Jimmy Kimmel accused of hypocrisy over past antics