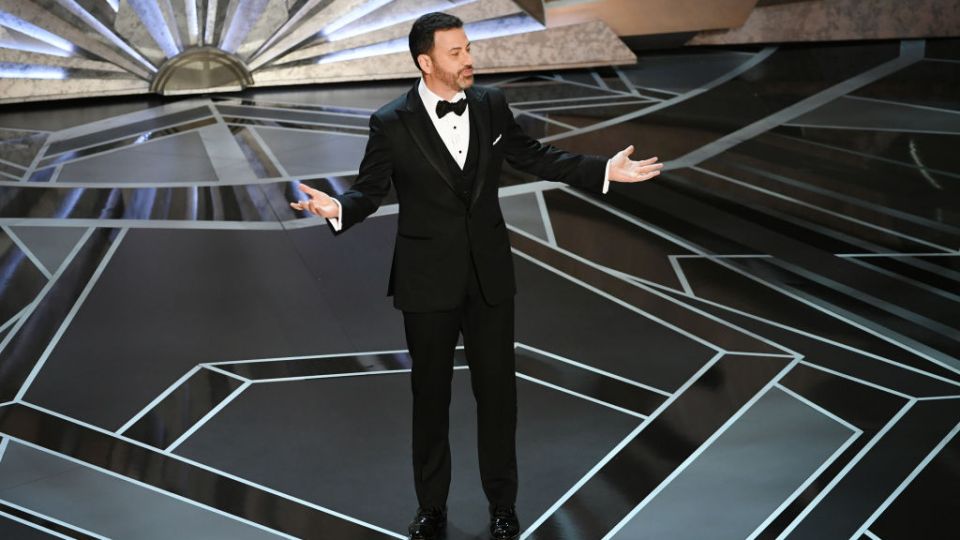 Jimmy Kimmel has been praised as the “chill, happy host we needed” in his second stint as the host of the 2018 Oscars.

The all-black red carpet parade at recent award ceremonies was missing but the sexual harassment awareness campaign #MeToo still had its moment.

Kimmel went straight to the heart of the sexual harassment campaign in a cutting opening monologue for the 90th Academy Awards on Sunday (US time) in Los Angeles.

“What happened with Harvey [Weinstein] and what’s happening all over was long overdue,” he said.

“We can’t let bad behaviour slide any more … if we are successful here, if we can work together to stop sexual harassment in the workplace, if we can do that, women will only have to deal with harassment all the time at every other place they go.”

To laughter from the star-studded audience, Kimmel said the Academy’s Oscar statuette was the No.1 man in show business.

“Oscar is the most beloved and respected man in Hollywood. And there’s a very good reason why. Just look at him. Keeps his hands where you can see them,” he said.

“Never says a rude word. And most importantly, no penis at all! He is literally a statue of limitations.”

He had opened by referencing last year’s infamous mix-up – when La La Land was announced as Best Picture winner instead of the real winner, Moonlight.

“The producers asked me if I wanted to do some comedy with the accountants and I said ‘nah’ … So then the accountants went ahead and did comedy on their own,” Kimmel said on the 2017 gaffe.

“This year, [they] said, and I quote, ‘our singular focus will be on the show and delivering the correct envelopes’. Which does make sense. Just out of curiosity, though, what was your focus the other 89 years?”

He also advised nominees: “This year when you hear your name called, don’t get up right away. Give us a minute, we don’t want another thing. What happened last year was unfortunate.”

To cheering and applause, he said #MeToo and Time’s Up were signs of long-awaited positive change.

“I remember a time when the major studios didn’t believe a woman or a minority could open a super hero movie,” he said.

“The reason I remember that time was because it was March of last year.”

There was more clapping for the many nominees Kimmel said had shattered glass ceilings (“if you were a nominee tonight who isn’t making history, shame on you”). They included Best Director nominee Greta Gerwig, Get Out director and writer Jordan Peele and young Best Supporting Actor nominee Timothee Chalamet.

US President Donald Trump and Vice-President Mike Pence came in for a couple of swipes – “We don’t make films like Call Me By Your Name for money. We make them to upset Mike Pence” – as did soon-to-be-former White House Director of Communications, Hope Hicks.

“If the last two years have taught us anything, it’s that reality can be depressing. But tonight’s nominated documentaries show us that were there is darkness, there’s also hope,” Kimmel said.

“Except at the White House. Hope quit on Wednesday.”

Kimmel finished with a warning for the night’s winners. There was a long show ahead, so there would be a prize for the winner who made the shortest speech.

“Why waste precious time thanking your mum when you could be taking her for the ride of her life on a brand-new jet-ski?” he said.

“This is not a joke. I will be timing you. I have a stopwatch.”

Later in the night he introduced the added incentive of a trip to Arizona’s Lake Havasu, where it was said the winner could give their new jet-ski a good workout.

At the end of the ceremony, Mark Bridges (who won the Oscar for costume design for Phantom Thread) was named the new owner of the jet-ski – his speech having lasted just 36 seconds. He was wheeled onto stage aboard his new pride and joy, clad in a life jacket and with Helen Mirren riding shotgun.

Kimmel also played nice guy to attendees by equipping each seat with a lunch box full of snacks and a handwritten note letting them know a donation to the Los Angeles Regional Food Bank had been made on their behalf.

.@jimmykimmel has #Oscars snacks for guests! V grateful for this lunchbox that was under my seat. Inside: a granola bar, candy, chips and a note 🙏🏼 pic.twitter.com/7fDBDo4Has

At a break in the ceremony, meanwhile, Kimmel led a group of stars – Australia’s Margot Robbie and Gal Gadot, Armie Hammer, Guillermo del Toro, Lin Manuel Miranda and Lupita Nyong’o – across the road to a cinema to interrupt a screening of A Wrinkle in Time.

The filmgoers whooped and shouted as the Oscars interlopers fired hot dogs into the crowd and handed out snacks. Kimmel then asked one audience member to introduce the next presenter.