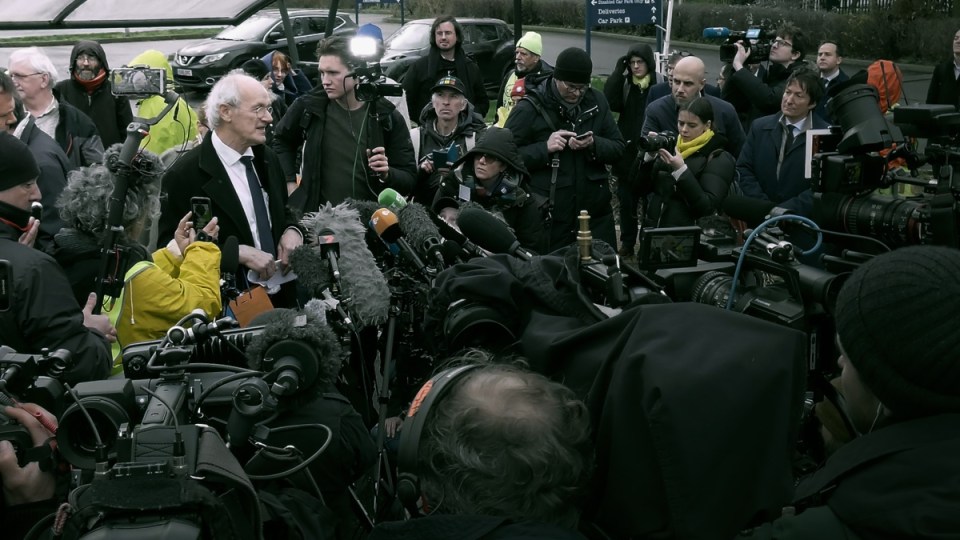 John Shipton fronts the cameras of journalists and filmmakers as he advocates for his son Julian Assange. Photo: ABC

In the second episode of new ABC series Ithaka: A Fight to Free Julian Assange, the man behind some of the largest classified-document leaks in history sings Twinkle, Twinkle, Little Star over the phone to his young son as he gets ready for bed.

Minutes before the sweet bedtime scene, Assange’s wife and legal adviser Stella Moris watches a video of a gospel choir singing in support of Assange outside of Belmarsh prison, where he has been held since he was dragged out of London’s Ecuadorean embassy in 2019.

This is the side of Wikileaks founder Julian Assange that his family wants you to see in the two-part documentary series available to stream from tonight on ABC iview.

Julian’s brother, Gabriel Shipton, one of the series’ producers, said he decided to document Assange’s fight for freedom after seeing how much his condition had deteriorated during a visit to see him in Belmarsh prison in late 2019.

Facing the possibility of never seeing his brother again, Gabriel, who hadn’t previously been involved in advocating for Assange, decided to bridge the ‘‘disconnect’’ between the real Julian and the public’s perception of him after years of media scrutiny.

‘‘Everybody who knows Julian knows him as a funny, sensitive, goofy, gentle genius,’’ Gabriel said.

‘‘But I was almost afraid to tell people that I was Julian Assange’s brother because of all these smears and things that were in the media.’’

Gabriel began filming his and Julian’s father, John Shipton, as he advocated for Assange’s release, and brought on director Ben Lawrence to write and direct the project six months later.

Ithaka documents two years of the fight against Assange’s extradition to the US on espionage charges.

But Assange only appears via phone and FaceTime calls, and via CCTV footage of his time in London’s Ecuadorean embassy.

His presence is always felt but rarely seen by the audience – a deliberate tactic Ben says was used to mimic the real-life experience of Assange’s family.

Ben said with Assange imprisoned and focusing on his legal fight, it was natural that John was at the forefront of the documentary.

As John says in episode one, Assange can no longer speak for himself, so his family and friends must speak for him.

Toll on loved ones

The documentary gives viewers unprecedented insight into the private lives of Assange’s family, which is particularly momentous for Stella, who only revealed herself as Assange’s partner and mother of his children in 2020.

Ithaka shows footage of Stella visiting Assange with their first baby son during his stint in the Ecuadorean embassy, and follows her to Barcelona to visit her parents, who help look after the children as she deals with Assange’s legal issues.

Stella had good reason for keeping her identity hidden in the past, having feared for her life at the hands of the CIA, but has since decided that Assange’s needs are greater.

Throughout the documentary, the audience sees John transform from someone happy to smile and speak to as many journalists as possible, while slightly umm-ing and ah-ing, to a more self-assured, media-savvy man equally more reluctant to face microphones and cameras.

‘‘We’re here … because we have a problem, we have a child in the sh– and want to get him out,’’ John tells the audience.

But he admits in the second episode, when he appears tired and disillusioned, that he doesn’t see Assange’s predicament getting any better – only worse.

Ben says this is simply a moment of despair for a man who has seen his son lose a decade through imprisonment in one form or another, before he continues trying to free him.

As John points out in Ithaka, life does not follow the convenient Hollywood structure of a beginning, middle and conclusion: Assange is still fighting extradition to the US.

Since the documentary completed filming, a UK court has formally approved the extradition of Assange to the US, which set alarm bells ringing for those concerned over protections of journalists and whistleblowers.

It is now up to the UK Home Secretary to determine whether the WikiLeaks founder will be extradited.

The two-part series Ithaka: A fight to free Julian Assange will air on ABC TV at Tuesday, June 7 at 8.30pm AEST, or on ABC iview

The man behind the leaks: Family paints picture of Julian Assange in Ithaka documentary