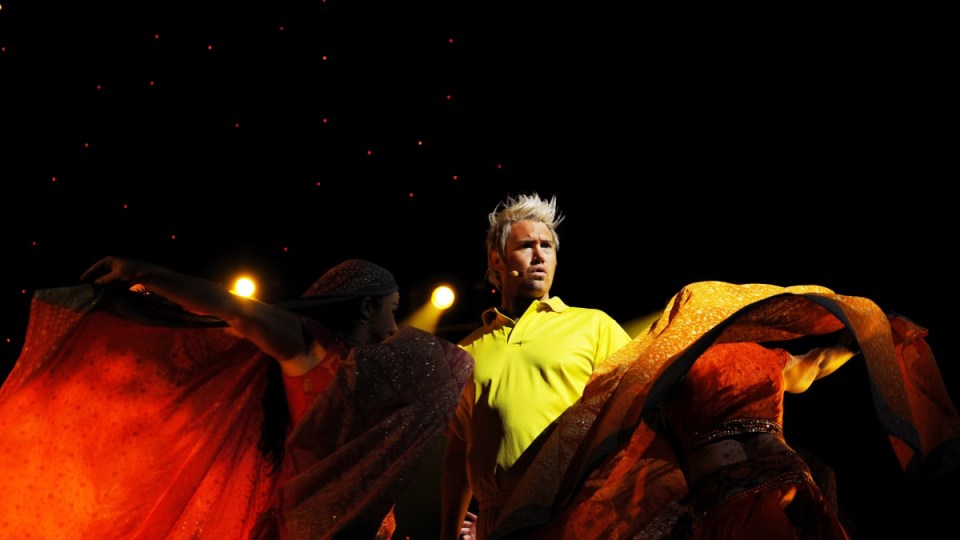 Back in 2008, Melbourne comedian and singer-songwriter Eddie Perfect was the first to shine a light on the great Shane Warne. Photo: AAP

When Melbourne comedian Eddie Perfect wrote and performed in a stage show about the late cricket legend Shane Warne’s life 14 years ago, Warne “detested” the fact a musical was being written about him.

After news of Warne’s death on March 4 in Thailand sent shockwaves around the sporting world, Perfect took to Instagram to share what possessed him to bring Warne’s colourful public and private life to theatres around Australia.

“If you add up all the time spent reading, studying and writing about the life of Shane Warne, it felt like I had a master’s degree in Warney [sic],” Perfect wrote.

“After three years of writing, my interest in Shane had grown into something of an obsession, and I’d never met him. In fact, up until maybe 48 hours before these [Instagram] photos were taken in 2008, he detested the fact a musical was being written about him.”

Perfect said Warne came to the second show at the Athenaeum in Melbourne in December that year “and loved it”.

“He gave me and the crazy musical I wrote his imprimatur and even came out through the festoon light doors on stage to take a bow on opening night.

“He was everything you hear about him; smart, funny, warm and generous,” said Perfect, who huddled with Warne after the show in a back booth of a CBD restaurant to swap yarns about life.

Perfect, who is also credited with writing songs for Broadway musicals Beetlejuice and King Kong, went on to win the 2009 Helpmann Award for Best New Australian Work for the production.

While there’s also been a Netflix documentary Shane The King of Spin (released in January, and numerous TV specials after his shock death, the Nine Network has just announced a new limited drama series is in the works.

Sadly, this one will be without Warne’s blessing.

But the first question on everyone’s lips is, who will be cast as Shane Warne and will Eddie Perfect have a role to play?

Perfect was unavailable for comment on Wednesday, instead focusing on recovery after recently contracting COVID-19, which put his current performing duties in the Dolly Parton 9 to 5 The Musical on hold for a few days.

The network’s head of drama, Andy Ryan, told the Sydney Morning Herald on Monday they wanted to “explore what made Warnie so special and why he had such a powerful effect on people”.

“Warnie’s life was so full of drama, like the man himself,’’ Ryan said.

“This mini-series will be larger than life – entertaining, confronting, thought provoking.

“We want to explore what made Warnie so special, and why he had such a powerful effect on people,” he said.

Ryan said Warne was “a sporting legend, a national treasure, international kind of icon, but he was also a larrikin, a rogue and a charmer and a flawed man”.

“He was an icon in all cricketing countries, but also all around the world,” Ryan said, promising the network will be making “a premium-quality drama with international appeal”.

He said the “national outpouring of grief over his passing had shown us – if we needed telling – just what a sort of impact he’s had on the national conversation”.

Indeed, Perfect’s lengthy, emotional Instagram post triggered more conversation, with many fellow actors and fans calling for the musical to go on a national memorial tour.

For many, it also brought back memories of the highlight of the musical and his performance of Shine Like Shane, with original lines like the public wanted a “knight in shining armour, not a hooligan in thongs”.

SeaChange‘s Kerry Armstrong wrote: “Bring him back soon … He would love that”.

Another wrote: “Bring it back for Warnie”.

“He was completely and unapologetically himself. He worked under enormous pressure and seemed to thrive on it.

“It was like he was appointed by some deity with mind-blowing superpowers, but at heart he was an Australian that everyone identified with.

“I just don’t want to say goodbye – there was so much more life to come.

“Others may try, but they will never shine like Shane.”

The Shane Warne Memorial Service starts at 7pm on March 30 at the MCG. Free tickets are available through Ticketek and the event will be live-streamed

What made Warnie ‘so special’? New TV mini-series promises a ‘larger than life’ drama