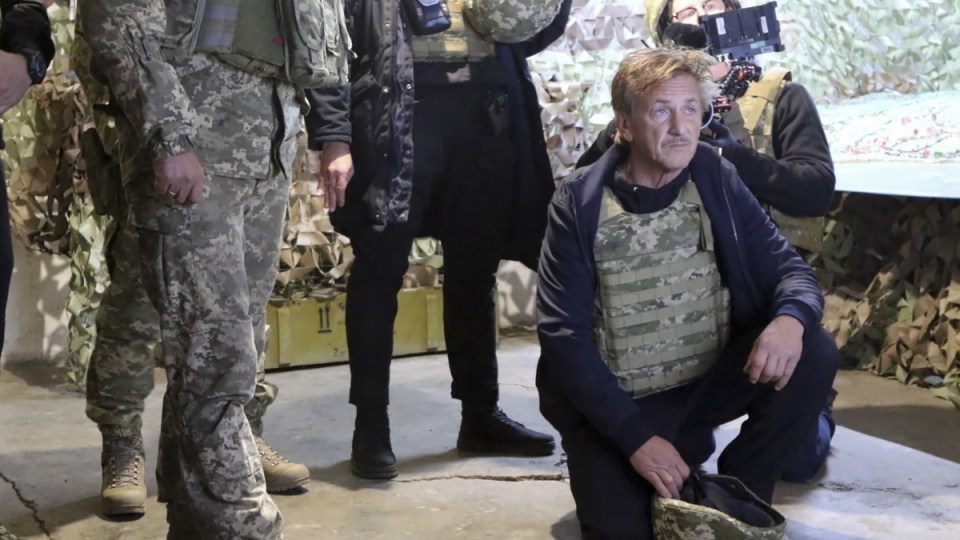 Sean Penn left Ukraine this week, walking with other war refugees to the border with Poland.

But three months before Ukraine became a war zone, the veteran Hollywood actor and activist found himself embedded with the Ukraine armed forces near the frontline with Russian-backed separatists in the Donetsk region.

It was November 18. He was there to set the groundwork for a documentary on the Russian build up of forces in the Donbas region of the country.

With the support of the Ukrainian government to “record all the events that are currently happening in Ukraine and to tell the world the truth about Russia’s invasion of our country”, Penn, 61, returned to Kyiv last week before an imminent invasion.

Sitting in the front row at a press briefing on February 25, Penn, who has a long history of activism in war zones and has previously raised awareness of humanitarian crises following natural disasters, wrote about Russia’s “most horrible mistake”.

“Already a brutal mistake of lives taken and hearts broken, and if he doesn’t relent, I believe Mr Putin will have made a most horrible mistake for all of humankind,” he said.

After Russian forces began their invasion a week ago, displacing hundreds of thousands of civilians – mainly women and children – and amid the request for men to stay behind and protect their country, Penn wrote: “President [Volodymyr] Zelensky and the Ukrainian people have risen as historic symbols of courage and principle.

“Ukraine is the tip of the spear for the democratic embrace of dreams. If we allow it to fight alone, our soul as America is lost,” he tweeted on February 27.

Early on the morning of March 1, he posted an eerie update of his journey, saying he had to abandon his car and walk “miles to the Polish border”.

“Almost all the cars in this photo carry women and children only, most without any sign of luggage, and a car their only possession of value.”

The Office of the Ukraine President had earlier acknowledged Penn on its official Facebook page, saying he showed “the courage that many others lack, including Western politicians”.

“He’s talked to reporters, to our military, he’s seen us defend our country,” it posted.

Penn, a two-time Oscar winner (for Mystic River in 2003 and Milk in 2008), has long been known for his numerous international humanitarian and anti-war causes over the years, travelling to Iraq in 2002 to protest before former president George W Bush’s US-led invasion.

“Sacrificing American soldiers or innocent civilians in an unprecedented pre-emptive attack on a separate sovereign nation may well prove itself a most temporary medicine,” he said at the time during a visit to Baghdad.

In a 2016 BBC feature, which documented his so-called “Hollywood hell-raiser turned activist” journey, Penn was destined for more than just being seen as a hard-drinking movie star who married A-listers including singer Madonna and Robin Wright.

Playing lead roles in movies was only partly what drove him.

He became passionate about writing, directing and producing stories and documentaries in his mission to be an outspoken advocate for human rights around the globe.

In 2005, he travelled to Iran as a foreign correspondent for the San Francisco Chronicle to cover the Iranian presidential campaigns.

He later founded the non-profit disaster relief organisation CORE (Community Organised Relief Effort) in response to the 2010 earthquakes in Haiti, chronicled in the 2020 documentary Citizen Penn.

In 2012, Penn travelled to the flood-stricken regions of Pakistan where he handed out blankets, quilts and food aid, and laid floral wreaths for those who had died.

His so-called “history of curious meetings”, as observed by the Washington Post, continued when he interviewed drug kingpin El Chapo for Rolling Stone in 2016.

The Post said Penn’s appointment book wasn’t full of meetings with publicists, producers and stylists, but rather with “international fugitives and polarising world figures”.

He admitted at age 55 that he didn’t know how to use a laptop, but that didn’t stop his long-form essays: “This will be the first interview El Chapo had ever granted outside an interrogation room, leaving me no precedent by which to measure the hazards.

“As an American citizen, I’m drawn to explore what may be inconsistent with the portrayals our government and media brand upon their declared enemies,” he said at the time.

CNN reported in 2021: “Penn might be a polarising figure, but he’s by no means a dilettante, having rolled up his sleeves and put his time where his mouth is, in addition to his money.

“In the process, he has tart words for people who attend glitzy fundraisers but don’t ante up for deserving groups and those desperately in need that they’re designed to serve.”

Seen on the ground after Hurricane Katrina with former president Bill Clinton, “he’s no stranger to parachuting into stricken areas, doing a lot more to help during a crisis than just smiling for a photo op … exhibiting a level of compassion that garnered an honour from Nobel Laureates in 2012”, wrote CNN.

Penn still has time for acting

Penn is set to star alongside Julia Roberts in the upcoming biopic, Gaslit, a US limited series about the 1972 Watergate scandal, which ended in the forced resignation of US President Richard Nixon.

Vanity Fair reported in mid-2021 that Penn demanded “the entire production gets vaccinated, or he walks away from the project”.

CORE also advocated for COVID-19 testing availability, and it has helped administer 1.7 million vaccines in the city.

Another Penn cause célèbre.

‘Hollywood hellraiser and celebrity activist’, citizen Sean Penn is at it again, this time in Kyiv