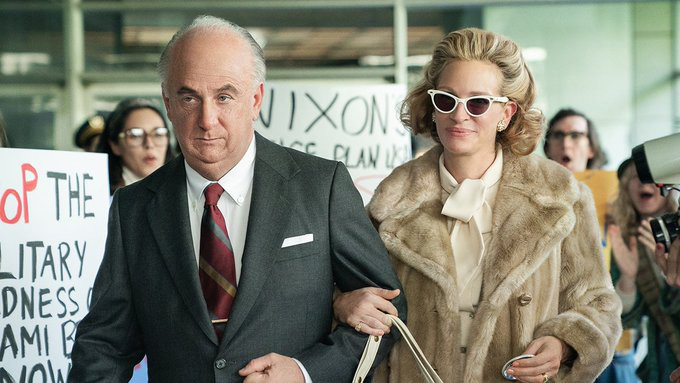 Julia Roberts has had a busy year.

She’s just dusted off the sand and packed away the Bali outfits after filming rom-com Ticket To Paradise with George Clooney on Queensland’s Sunshine Coast.

Now she has reappeared in the first teaser of her starring role in Gaslit, a US limited series about the 1972 Watergate scandal, which ended in the forced resignation of US President Richard Nixon.

And some say she and co-star Sean Penn are almost “unrecognisable”.

Unlike the 1976 classic film All The Presidents Men, which focuses on Washington Post journalists Carl Bernstein and Bob Woodward and abruptly ends with President Nixon resigning, Gaslit promises to give “audiences their first look at the untold stories and forgotten characters of the Watergate scandal,” reports Entertainment Tonight.

Creator and executive producer of the series Robbie Pickering tells ET Gaslit is the “Watergate story you’ve never heard before”.

While it will chronicle the 1972 political scandal that ultimately brought down the president, the goal of this iteration, he says “has always been to bring a real humanity to this subject, which yields a far richer and more relatable story than the standard male-driven political dramas about the period”.

“At the centre of the show is Martha Mitchell, an unlikely whistleblower who is the first person to bust the whole scandal wide open and ultimately becomes the subject of a vicious White House smear campaign enacted in part by her own beloved husband, Attorney General John Mitchell.

“We also feature John Dean (Dan Stevens), a hotshot administration lawyer dragged into the coverup and thrust into the spotlight with his acerbic, whip-smart wife, Mo (Betty Gilpin).”

A first season episode of the Slate podcast called Slow Burn forms the basis of Gaslit, and as host Leon Neyfakh explains, “Watergate was stranger, wilder, and more exciting than you can imagine”. He was motivated to find out what it was like to live through the scandal that brought down the president.

“[In the movie], Woodward and Bernstein are sitting at their typewriters, clacking away, and then there’s a rapid montage of newspaper stories about campaign aides and White House officials getting convicted of crimes, about audio tapes coming out that proved Nixon’s involvement in the coverup.

“The last bit we see is Nixon resigns. It takes a minute in the movie.

“What was it like to experience those two years in real time? What were people thinking and feeling as the break-in at Democratic Party headquarters went from a weird little caper to a constitutional crisis.

“Those two years were littered with incredible stories that are all but forgotten,” Neyfakh narrates.

In his podcast we hear from the real Martha Mitchell [Roberts], who says: “The break in … that was the beginning of my being held a prisoner.”

As People reports, it was Mitchell, “who uncovered President Nixon’s involvement in the Watergate scandal … [which put] the career of her husband Attorney General John Mitchell … at risk.

“It centres on Martha’s decision to sound the alarm on Watergate, despite her party affiliation, which causes both the presidency and her personal life to unravel.”

‘Because it’s the truth’

As we see in the trailer when she’s questioned about becoming a Watergate whistleblower and exposing the scandal, Mitchell is asked, “Why risk your husband’s position?”

“Because it’s the truth,” she responds in a definitive Southern twang.

“I’m a Southern woman. We speak our minds, we talk, I never stop talkin’.”

Adds Pickering: “I can’t wait for viewers to experience the extraordinary performances in this remarkable ensemble, led by Julia Roberts, brought to life in this thrilling, stranger-than-fiction tale of marriage, love, betrayal, and ultimately, hope.”

‘Stranger than fiction’: Watergate series reveals forgotten players who brought down a president