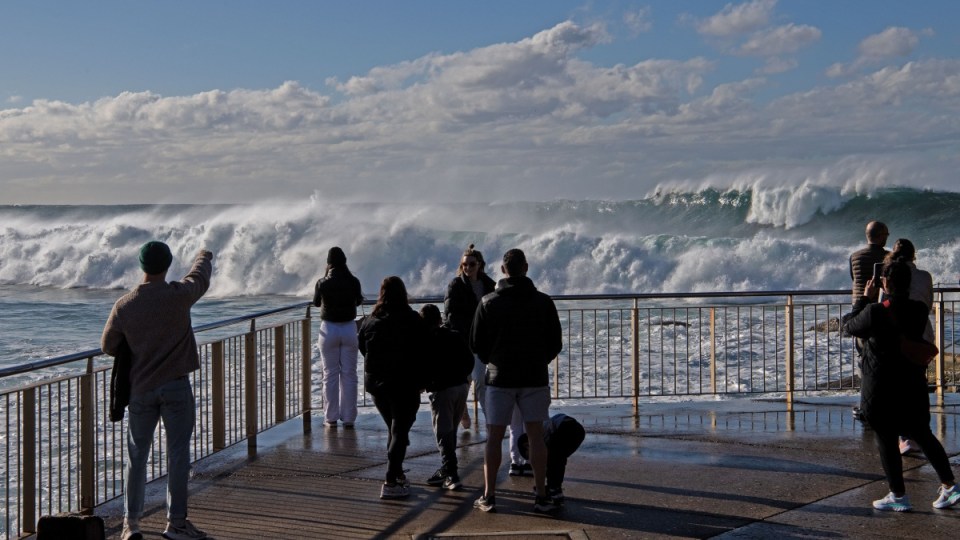 And the Bureau of Meteorology said the icy blast that had caused much of the extreme weather may be just a taste of what’s to come in a long and cold winter.

Weather alerts have been issued across NSW, Victoria and Tasmania, with massive seas battering southern-facing coastlines.

People have been warned to stay out of the water along the NSW coast as beaches are battered by powerful winds and massive waves.

Some of the most dramatic weather was in Sydney, where powerful waves surged onto the Bondi Beach promenade for the second time this year. Bins were washed away and cars left drenched late on Sunday and early on Monday.

There were similar scenes in April.

Bondi, Coogee and Maroubra beaches were all closed to the public on Sunday.

There has also been erosion in some areas, with locals reporting Cronulla Beach was all but washed away on Monday.

“The whole of Bate Bay has been smashed by big waves and high tides. North Cronulla beach doesn’t exist,” John Veage, the chief photographer for the local Leader newspaper, said on Monday morning.

The Esplanade at Cronulla beach was reportedly awash in the high tide on Sunday night, with water swirling through part of a beachside cafe.

In Tasmania, the Bureau of Meteorology has issued a road weather alert for the north-west coast, central-north, north-east, central plateau, Midlands and east coast districts as icy weather continued.

Tasmania’s State Emergency Service warned on Sunday it was experiencing a “high number of requests for assistance”, particularly in the state’s north-west.

Eight people stranded in blizzard-like conditions on Tasmania’s Mount Wellington were rescued on Sunday, while a 54-year-old woman was killed after being people trapped under a fallen tree in Beulah, west of Launceston, on Saturday.

Jackson Browne of the BoM said the icy conditions were caused by winds coming off the Antarctic coast.

“Instead of winds travelling west to east as they normally do in the mid latitudes, we saw a lot of north-south movement,” Mr Browne said.

As well as causing freezing winds in Tasmania, the Antarctic blast and associated high-pressure system is also whipping up the seas, creating high swells across southern Australia.

“We saw surf up to eight to nine metres in Tasmania, and now that’s moved towards the NSW coast,” he said.

Waves buffeted southern-facing beaches through Victoria and along the NSW coast as far north as Byron Bay on Monday, while Lorde Howe and Norfolk Islands in the Tasman sea were “being walloped” by swells.

In Western Australia, damaging winds averaging 60 to 70km/h with peak gusts of about 100km/h were likely through parts of the south-west, with winds are expected to spread east later Monday.

The BoM said the front was expected to produce dangerous weather only seen once every three to four years in the south-west of the state, with Albany, Bunbury, Busselton, Esperance, Katanning, Manjimup, Margaret River, Mount Barker and Narrogin all in the firing line.

Jackson Browne from the Bureau of Meteorology said both the south-east and south-west were copping more freezing weather from ongoing polar blasts.

“I hate to say it, but we’re only 13 days into winter,” he said on Channel Nine’s Today show.

“July, generally, is the coldest month of the year. So there’s plenty more opportunity for these cold blasts to affect us.”