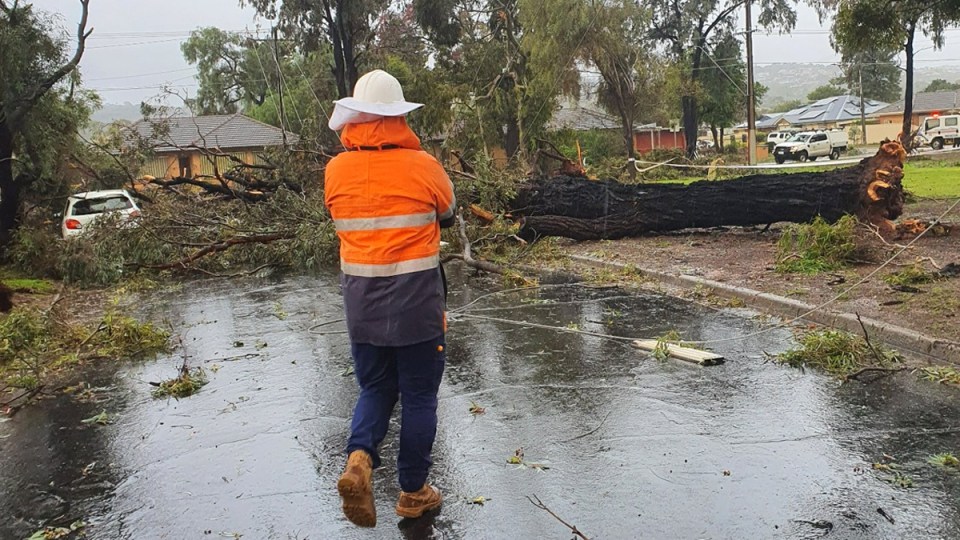 An icy blast is descending on much of Australia, bringing a biting end to autumn with freezing temperatures, gusty winds and torrential rain.

The cold front will sweep through South Australia into Victoria, NSW and Queensland from Monday, while Western Australia is also in line for more rain.

It follows a night of torrential rain in Adelaide, when up to 70 millimetres pounded the city.

Early on Monday, there was even a mini-tornado that brought down powerlines and trees and damaged houses in Salisbury, about 20 kilometres north of the Adelaide CBD. It hit shortly after 5am on Monday, the South Australian State Emergency Service said.

More than 200 people called for help, with SASES reporting it was difficult to get to some areas due to a large amount of debris blocking roads.

More than 1850 homes and business across the city remained without power about 2pm on Monday. Electricity distributor SA Power Networks warned some customers might be without power until Tuesday

There was still a severe weather warning for damaging winds for much of SA, as the bitter cold front moved towards Australia’s east.

On Monday, Melburnians awoke to a forecast top of just 12 degrees, making it potentially the city’s coldest day of 2022 yet.

Victoria is expected to shiver under the sharp cold front until Saturday, with the Bureau of Meteorology estimating overnight minimums of less than six degrees for most of the week.

The BoM forecasts Tuesday and Thursday will be the state’s coldest days this week, with Melbourne forecast for a top of just 11 degrees.

The Bureau of Meteorology predicts a low of 6 degrees in the Melbourne metropolitan area and the state’s east, while Geelong could fall to lows of just 5 degrees from Wednesday.

Snow levels are expected to rapidly drop on Tuesday to 600-700 metres across Victoria, Tasmania and south-east NSW, and above 800 metres in the NSW Central Tablelands.

Significant snow on alpine peaks of 20-50 centimetres is likely, with blizzard conditions.

The bureau warns the low-level snow and windy conditions will create particularly hazardous driving conditions, with inland highways likely to be hit by sleet.

Maximum temperatures are expected to be 3-6 degrees below the May average, including in areas as far inland as southern Queensland and southern NT.

In NSW, freezing gale-force winds and significant rainfall in southern areas will mark the early parts of the week.

The BoM predicts temperatures will also fall, with the start of June set to bring maximums of only 15 degrees for much of NSW.

Sydneysiders will also experience a significant north-westerly wind in coming days, along with minimum temperatures as low as 7 degrees until Saturday.

Thursday will be the coldest day for the city this week, according to the BoM.

Further up the east coast, Queenslanders won’t escape the chill.

Winter arrives in the sunshine state in the middle of the week. Queensland is expected to have its coldest day of the year on Thursday as the weather system reaches its peak, with a minimum of 6 degrees in Brisbane.

The strengthening cold front is moving east across the country after hitting South Australia on Sunday.

SA can expect intense showers and potential thunderstorms until Tuesday. If follows rainfall totals of 30-70 millimetres across much of Adelaide on Sunday night.

There were severe weather warnings for damaging winds and heavy rainfall across much of SA on Sunday. The BoM reissued the warning on Monday.

It will also be cold, with BOM predicting minimums of 8 degrees for much of the state – close to its coldest yet for 2022.

A further 100 to 150 millimetres was possible on Monday, while moderate-to-heavy falls will continue on Tuesday.