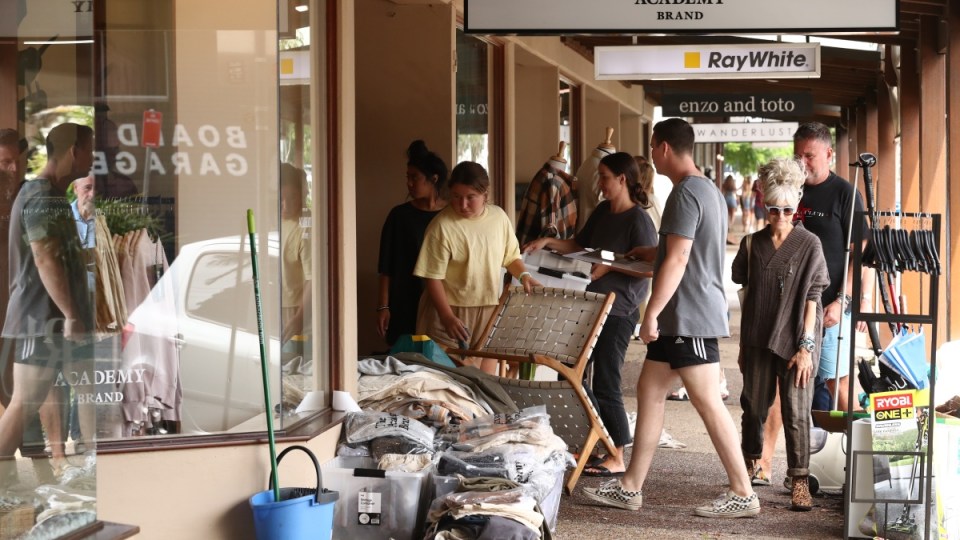 The mammoth clean up in the flood-devastated NSW Northern Rivers region is nearly over. Photo: AAP

Sydneysiders are in for more rain after a brief reprieve of sunshine, as the flood clean-up in northern NSW wraps up.

The Bureau of Meteorology said rain was expected in Sydney until the end of April, with Friday predicted to be the wettest day of the week.

A major storm system hit the city on Tuesday night, bringing thunderstorms, only for the sun to break through on Wednesday.

Light showers due to persistent onshore south-easterly winds are expected instead of the drenching the state received in the past two months.

In the flood-devastated Northern Rivers region, the mammoth clean-up effort is nearly over with more than 20,000 truckloads of waste cleared.

“Around 95,000 tonnes of waste has been removed from flood-affected towns and deposited at facilities in Alstonville and Coraki. That’s equivalent to 126 Olympic swimming pools,” Deputy Premier Paul Toole said on Thursday.

Emergency Services Minister Steph Cooke said the end was in sight with bulk clean-up operations expected to wrap up by the end of the month.

“Completing the clean-up is a major step in helping people recover from this disaster,” Ms Cooke said.

“It has been the toughest of times for our flood-affected communities so it’s heartening to see some light at the end of the tunnel.”

Rubbish and debris in Ballina, the Tweed and Richmond councils have been fully cleaned. Lismore, the devastated epicentre of the relentless NSW floods after its levees were breached, is at 90 per cent.

Cases are high and winter is coming. We need to stop ignoring COVID
What to expect as cold weather and rain move towards the east coast
Today's Stories

More rain to round out April for NSW, as flood clean-up nears end