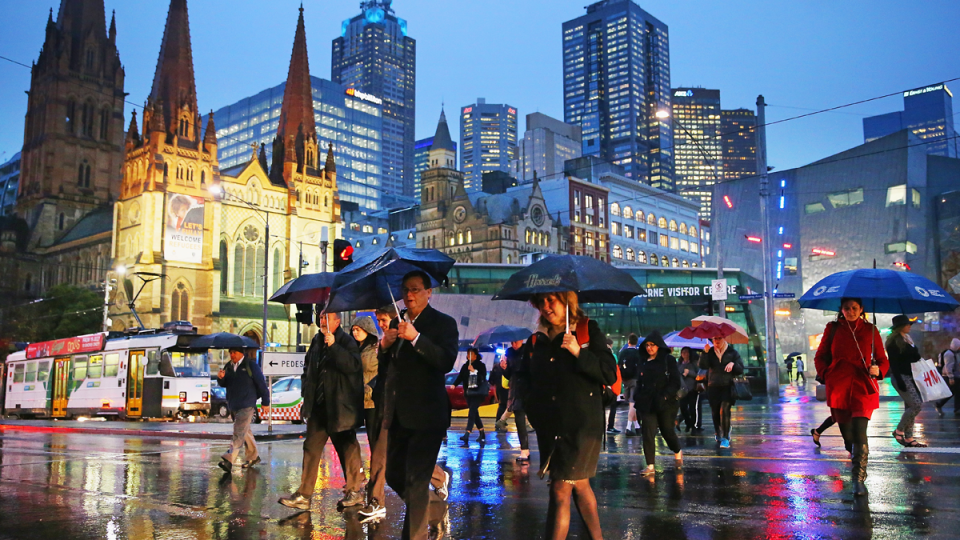 Melbourne is set for a few rainy days. Photo: Getty

The weather across Australia’s east coast is set to turn wet again, with temperatures also forecast to fall.

But some of the hardest-hit regions have been spared from the brunt of the downpour as a low-pressure system clouds over Melbourne.

“The current weather system is bringing much-needed rain to parts of Victoria and southern New South Wales,” Jane Bunn, a 7News meteorologist and founder of JanesWeather.com told The New Daily.

It may have meant a wet Easter Monday for Melbourne, but for Sydney and much of NSW, the long weekend proved to be a few days of sunny respite from what has been the city’s wettest year since 1956.

However, both cities will experience a cold snap this week.

As low-pressure systems move east across Victoria and south from the coast of Queensland, here’s what to expect in the coming days and weeks.

In Sydney, the Bureau of Meteorology has forecast a medium chance of showers on Anzac Day and a high of 22 degrees Celsius.

It might not match the blue skies over the Easter long weekend, but it will likely be much calmer than the torrential rains during March.

In Melbourne, things are looking even better for Anzac Day.

The city is set for a dry day with a few clouds in the sky.

The maximum temperature is tipped to be 20 degrees.

The flood-affected regions of Northern NSW and south-east Queensland have been spared from the current bout of rain.

“The recently flooded NSW coast and east Gippsland should see the least rain, as this one is different from previous weather systems,” Ms Bunn said.

“This time low pressure moves in from the west, so the east coast is in the rain shadow.”

However, the east coast isn’t in the clear just yet.

Meteorologists expect the rainier-than-usual conditions to continue for weeks to come, and rainfall in the region is predicted later in the week as a trough moves south from Queensland.

“So whenever strong low pressure moves in the right spot for the east, it produces heavier-than-usual rain.”