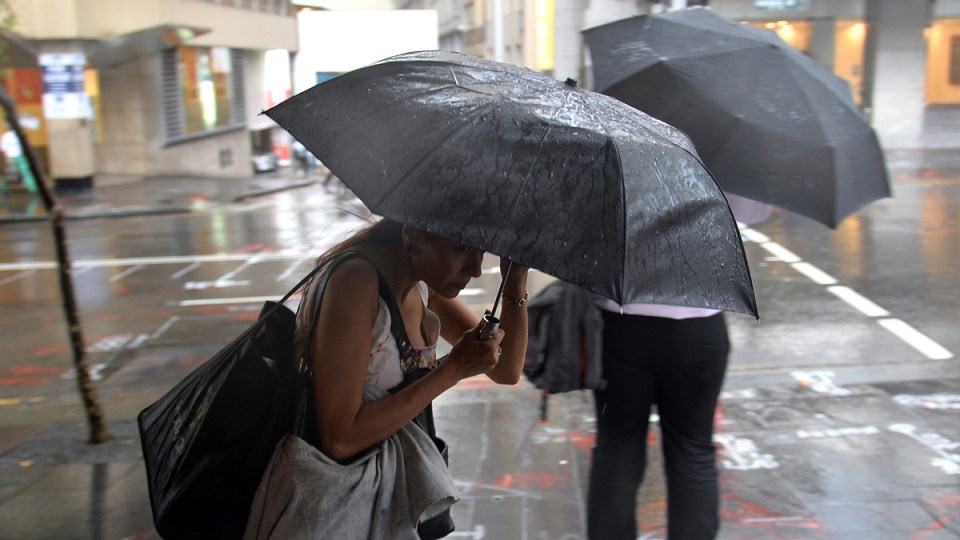 The BOM is predicting at least another week of heavy rain and thunderstorms along NSW's coast. Photo: AAP

More heavy rain has been forecast for parts of NSW and Queensland where thousands are still cleaning up after unprecedented downpours that brought record floods earlier this month.

The Bureau of Meteorology said the La Nina pattern that brought record rain and flooding over summer is far from over, with wild weather expected to continue for months.

The BOM has predicted at least another week of heavy rain and thunderstorms along the east coast from Sydney, the Hunter and up the mid-north coast and the northern rivers – all areas that remain saturated after this month’s torrential downpours.

The big wet is also likely to extend into parts of southern Queensland.

A strong wind warning has also been issued for the NSW coast from Sydney south as far as Eden.

Weatherzone forecaster Ben Domensino said a slow-moving upper-level trough interacting with warm and moisture-laden air would trigger widespread rain and storms in eastern Australia every day until at least Tuesday.

“Unfortunately, there is potential for accumulated totals in excess of 100 millimetres in areas of central and north-east NSW that were recently affected by flooding,” he said.

“If this comes off, it could cause renewed flooding in some areas.”

However, early modelling remains uncertain about just how much rain will fall, and where.

The BOM’s Jonathon How said there was the potential for flash flooding as rain hit already saturated soil as well as catchments, rivers and creeks.

A southerly change will hit on Wednesday afternoon with possibly severe thunderstorms north of Newcastle. There will be heavy rain and damaging winds, possibly extending to the mid-north coast and southern parts of the northern rivers, which copped the worst of the recent flooding.

“From tomorrow that’s when we see the rain become more widespread right down towards the south coast as well,” Mr How told the ABC on Wednesday.

Rainfall of up to 150 millimetres is tipped for much of NSW in the next five to seven days – although some areas of the Hunter, mid-north coast and northern rivers could get up to 200 millimetres.

People living in communities affected by the recent flooding have been particularly warned to keep an eye on forecasts, with the BOM poised to issue a flood watch for parts of the central and northern coasts.

“We will really see that rain start to pick up later in the week,” Mr How said.

“Thee soils are just so saturated it won’t take many more millimetres for … those creeks and rivers possibly start to rise towards the latter part of the week.

“We could see flash flooding and riverine flooding as well …. definitely don’t be complacent,” he said.

There was also the potential for more minor and possibly moderate flooding for some rivers.

“It certainly could be quite dangerous for these communities,” Mr How said.

NSW has already endured a soggy summer, while Sydney has had 409 millimetres of rain during March already, making it the fourth-wettest March on record.

“This is all part of the La Nina pattern sticking around and we are expecting it to stay until late autumn,” Mr How said.

Meanwhile, the NSW parliament has voted to establish an independent inquiry into the state and federal governments’ response to the flood crisis.

The announcement follows the NSW government announcement just days ago that former police commissioner Mick Fuller will head an investigation into the causes of the floods and the emergency response.