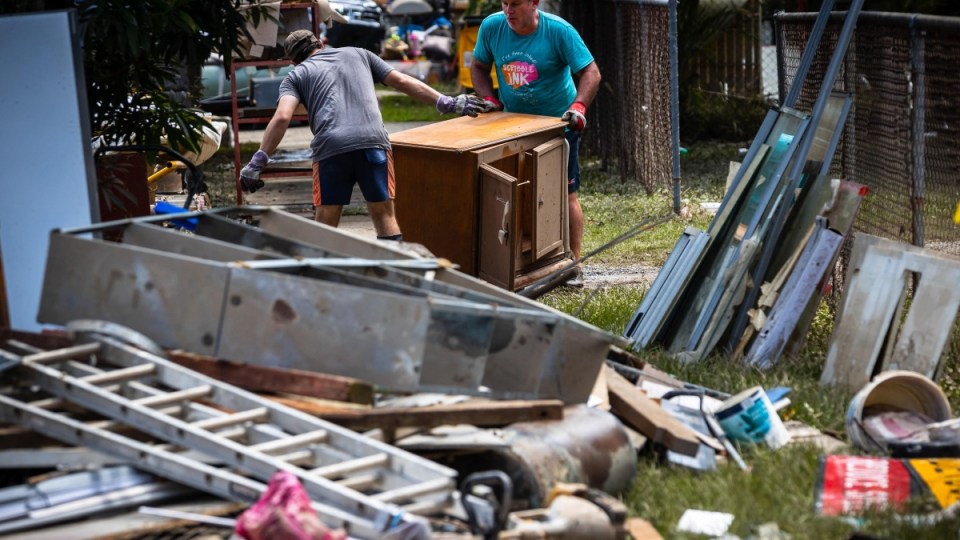 One man is still missing in the south-east Queensland flood disaster that has now claimed 13 lives Photo: Getty

South-east Queensland’s flood death toll has risen to 13 after man’s body was found in the state’s south, with another man still missing, amid debate about mitigating future disasters.

Police found the body, believed to be a 31-year-old man who’s been missing from Warwick for nine days, in a car in floodwaters in the Condamine River on Monday afternoon.

Another man remained missing and feared dead on Tuesday, after falling from a boat on the Brisbane River near Breakfast Creek on February 26.

The weather had largely cleared up across much of Queensland’s south-east on Tuesday after major floods that damaged more than 20,000 homes and business.

The state government estimated private insurance claims on homes and businesses would top $936 million. The bill for fixing public infrastructure such as roads, bridges, power lines and railways is expected to top $500 million.

The floods are also expected to wipe 0.25 per cent, or $1 billion, off state’s economic growth in the current quarter.

Flood waste weighing the equivalent of more than 24 Airbus A380s has already been collected in Brisbane, where 190 suburbs have damaged properties.

Brisbane Lord Mayor Adrian Schrinner said more than 20,000 homes had been affected, as well as businesses.

He says a range of options would mitigate future floods such as building more flood-resilient homes. But simply buying and demolishing flood-prone homes was too expensive and not a “silver bullet”.

“There were 20,000 properties, residential properties that were flooded, if you actually start to calculate the value of those properties we’re talking about billions of dollars worth of property,” Mr Schrinner told ABC radio on Tuesday.

“If I came to you and said: ‘Look sorry, you live in a flood area, out you go, we’re gonna bulldoze your home’, I’m not sure how you’d feel about that.”

He said under the council’s previous flood buyback scheme the $58 million allocated was enough to buy only 112 homes, and many residents didn’t want to sell anyway.

He said it was also difficult to change planning laws to make a difference when there were already thousands of homes and businesses built in flood zones.

“These were often settled at the beginning of Brisbane’s sort of modern history, so potentially more than 100 years ago, and so in those areas there’s some entire suburbs virtually that do experience some flooding,” the mayor said.

“You couldn’t just go in and clear an entire suburb and just say: ‘Sorry, no one can live here any more’.

“These are people’s private properties, and so like I said, there’s going to be a combination of responses.”

Thousands warned as Sydney suburbs expected to be inundated
When it comes to flood relief, cash is still king. Here’s where to donate
Today's Stories