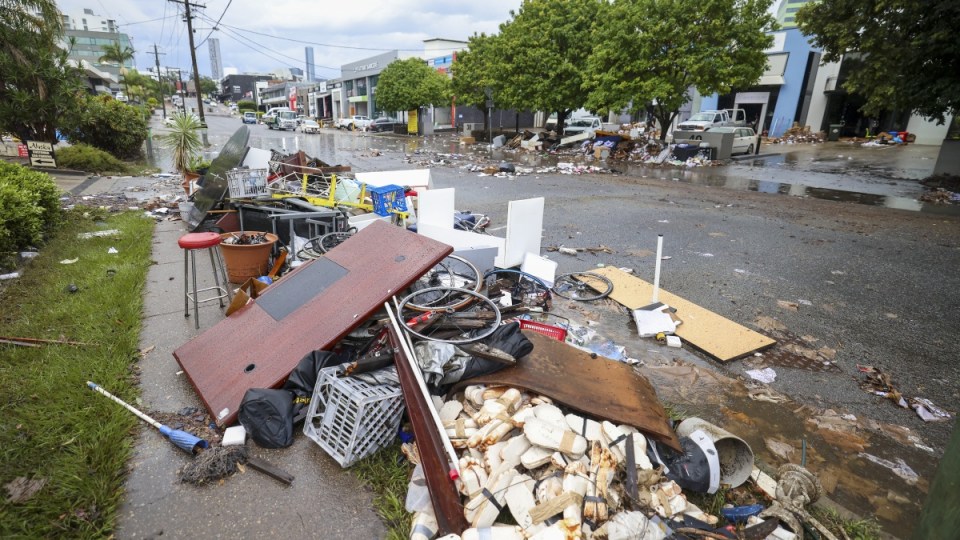 The big clean-up had only just started when further downpours were predicted.Photo: Getty

A man’s body has been found after catastrophic floods in south-east Queensland, taking the death toll to 10, with another man still missing.

Police Commissioner Katarina Carroll said the 53-year-old’s body was found under a wharf at the Port of Brisbane on Thursday night, four days after he was last seen in a small aluminium boat on the Brisbane River at Murrarie.

Ten people have now died in major floods triggered after days of record-breaking rain pummelled Queensland’s most heavily populated region between Gympie and the NSW border.

“All of these deaths are flood-related, some completely unexpected, where water has risen very, very quickly in areas that we’re not used to,” Ms Carroll said on Friday.

“Over the next few days as the showers, and storms, and rain continues, please be aware of that flash flooding, be aware of your circumstances.”

The deaths of five people have also been confirmed from the floods in NSW. They include four in the north-western town of Lismore, which was hit by its worst floods on record.

In Queensland, one man remains missing after he was seen falling from a boat on the Brisbane River near Breakfast Creek last Saturday.

QFES Commissioner Greg Leach said there had been 650 swift water rescues, and emergency services had received almost 12,000 calls for help in the past 11 days.

“We still have around 900 tasks outstanding, so it will take us another two to three days to get to you,” he said, addressing those who had sought help.

“If you are waiting for SES assistance, please be patient, we will get to you.”

Whole communities remain cut off by floodwaters in both states. In Queensland, 15,000 properties were without power on Friday, and up to 17,000 homes and businesses have been damaged.

Police and Defence Force troops have been air-dropping food, water and medical supplies to those stranded, while 260 people are staying in evacuation centres in Queensland.

Hundreds more are in centres in NSW, where 500,000 people faced evacuation orders or warnings earlier this week. Across the flood zones, shortages of critical supplies such as food, fuel and fresh water also remain.

More than more 2000 ADF personnel are involved in the flood effort, and will also take part in clean-up efforts. But they were stretched over a geographically huge area spanning the south-east corner of Queensland and down the east coast toward western Sydney, he said.

“The effort on the ground is frustrated in some areas because it is inaccessible even to the ADF with their vehicles to get in and start the clean up,” Mr Dutton told the Nine Network on Friday.

Conditions eased in both states on Friday. But Bureau of Meteorology forecaster Laura Boekel said a flood watch remained in force for the saturated catchments of Brisbane, Ipswich, Logan, and the Sunshine and Gold Coasts.

“They have no ability to take on and absorb any water, so any water that does fall from showers or storms today could lead still to flash flooding,” she said.

In NSW, greater Sydney, the central coast, south coast and – particularly – the Hunter region also remain on alert for more flooding. The weather bureau has warned of up to 150 millimetres of rain in the Hunt in the next four days, with severe thunderstorms, heavy rains and damaging winds forecast.

“We are not past the danger period yet. The rivers are very high, fast-flowing,” NSW SES Commissioner Carlene York said.

All south-east Queensland schools were closed as a precaution on Friday, ahead of predicted wild weather.

On Thursday, Ms Palaszczuk told parents to collect their children from all schools between Brisbane’s northern outskirts and Bundaberg, but there was confusion among school staff and parents, who weren’t sure if the orders included them.

All schools will reopen from Monday, except for 64 state and 76 non-state schools damaged by floodwaters.

About $559 million in disaster grants and loans are also being offered to individuals and businesses from the state and federal government.

Ms Palaszczuk said the total cost of the “unprecedented” disaster was unclear as severe weather forecasts were hampering damage assessments on homes, businesses, roads and railways.

“We seem to be dealing with more and more, more cyclones, more floods, you know, a couple of years ago … we had the catastrophic fire events in central Queensland, Queensland had never seen catastrophic before.”

However, she said the disaster hadn’t diminished her own support for fossil fuel and Queensland was “lucky” to have coal and gas, with renewable energy investment also ramping up.