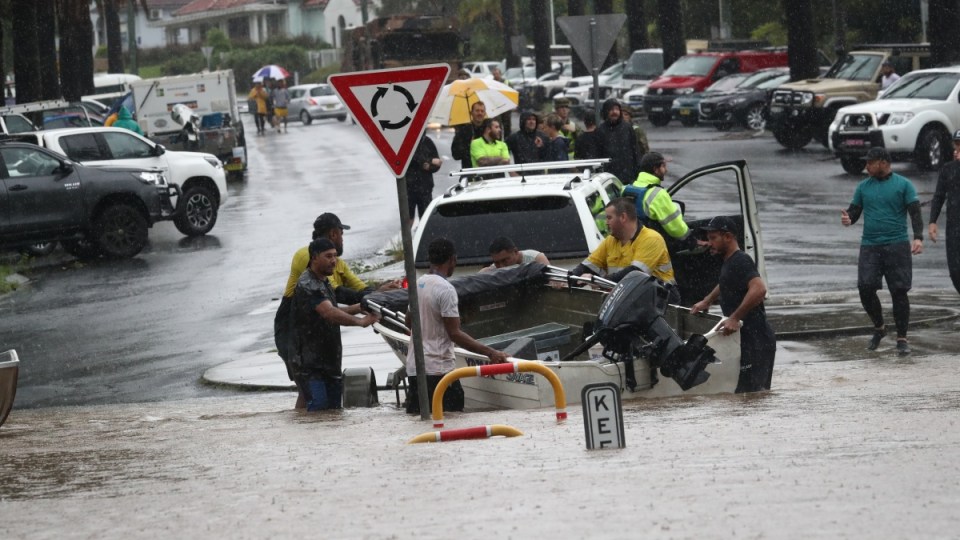 An inquiry has been set up to investigate the causes of the recent floods disaster in NSW. Photo: AAP

People in South Ballina have been told it is too late to leave as floodwaters hit the northern NSW town.

The State Emergency Service performed 932 flood rescues across the Northern Rivers region – which encompasses Ballina – in the 24 hours to Tuesday morning.

There are evacuation orders covering 34,000 people, with another 310,000 across the state on standby.

People in the other parts of Ballina have been ordered to evacuate as unprecedented flooding continues to devastate vast swathes of the NSW north coast.

“If you are under an evacuation order please evacuate immediately unless it is not safe to do so,” an SES spokesman said.

“Do not go through dangerous floodwater to get out. Move to higher ground where possible.”

The crisis has engulfed the north-eastern part of the state, with multiple major flood warnings including the Tweed, Richmond, Wilsons, Brunswick, Bellinger and Clarence rivers.

The Bureau of Meteorology warned NSW was in for more thunderstorms, heavy rain and damaging winds as extreme weather moved south along the coast.

A developing low pressure system is heading towards Sydney on Tuesday night and Wednesday morning, with heavy rain that could cause flash flooding and potentially hazardous conditions.

Thousands of people have been made homeless by flooding on the north coast with many spending the night in evacuation centres.

The unfolding crisis is at its worst in the northern rivers city of Lismore, which remains submerged after the Wilsons River peaked at 14.4 metres at 3pm on Monday before starting to fall.

River levels are expected to remain above the major flood level of 9.7 metres until midday on Tuesday.

Hundreds of people are still unaccounted for and at least one man is feared dead after he went missing in flood waters.

“Please have your bag packed … be ready to go.”

Emergency services were overwhelmed with calls for help on Monday. Hundreds of people across the region were stranded for hours on rooftops as state and federal emergency services struggled to access impacted areas.

Premier Dominic Perrottet described the flooding and its impacts as “unprecedented” and “distressing”.

Rescuers in a flotilla of dinghies and inflatables plucked stranded Lismore residents from the rooftops and balconies of submerged homes.

Disaster assistance is available in 17 local government areas in response to severe storms and flooding, which began on February 22 and continues to impact large areas of northern NSW.

Help is being provided through the jointly funded Commonwealth-State Disaster Recovery Funding Arrangements.

As emergency crews were overwhelmed, people pitched in to help each other.

About 45 recently arrived Fijian abattoir workers helped rescue about 60 residents from a Lismore nursing home that was inundated.

Apenisa Marau said the scene at the home was “just devastating … the entire building was underwater”.

“It was quite terrifying trying to get those elderly people out of their homes,” he told 2GB.

Shelly Hayes, from the flooded area of Coraki about 25km south of Lismore, was worried about food supplies

“As a town we’re going to need a food drop because all the roads are cut off, so we can’t get out and nothing can come in,” she said.