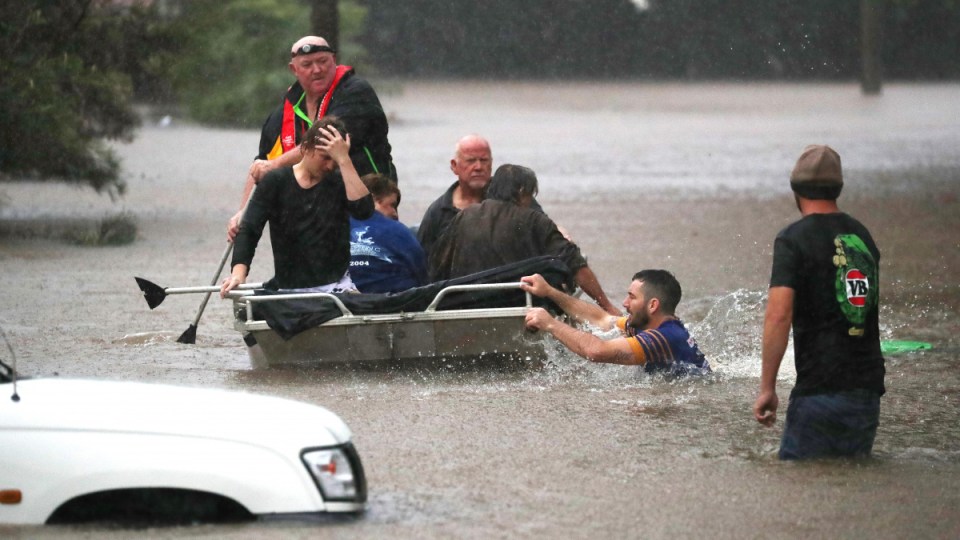 Flooding in Lismore is expected to be the worst on record. Photo: AAP

People are trapped on rooftops, and even in roof cavities, as floodwaters rise in the northern NSW town of Lismore amid an “absolutely heartbreaking” disaster that is expected to be the town’s worst on record.

The life-threatening emergency in NSW has forced thousands of people to evacuate and put extreme pressure on emergency services.

There are also grave fears across the border in Queensland, where thousands of houses are expected to be flooded in as the Brisbane River peaks on Monday morning.

An emergency alert for life-threatening flash flooding was also issued for the Tallebudgera Valley and Currumbin Valley on the Gold Coast on Monday morning.

In NSW, about 15,000 people have been evacuated on the north coast and the entire Lismore CBD is inundated after days of unrelenting torrential rain as the town braces for a flood crisis that will surpass the devastation caused in 1974 and 1954.

Lismore resident Katie Davie was trapped on her roof with her husband and children aged six, nine and 12 on Monday morning. She said the family was woken by noises at 3am.

“That’s when I discovered that the water had risen so much that it was almost at the level of our balcony and coming in our house,” she told the ABC.

“We are worried. We think that something definitely bigger needs to be happening and I don’t think that Lismore SES or even residents with boats can help with the magnitude of people that will be needing help.”

Ms Davie said the family was OK, although all were cold and hungry. But she was also worried about her neighbours.

“We’re not even the worst. Like, we have an elderly couple next to us who are stuck in their roof cavity. They can’t get out. They’re banging on the roof and screaming for help and we can’t help them,” she said.

There was also a report of a pregnant woman stranded on the roof of her home.

The Bureau of Meteorology said Lismore’s Wilsons River could reach about 14.20 metres on Monday afternoon, stoking fears of unprecedented inundation in the area.

“We are putting every single available emergency services personnel and resources in place to support the community,” Ms Cooke told radio 2GB.

“We appreciate that this situation is absolutely heartbreaking.”

The government was “throwing everything” it had at the crisis. Resources from RFS, NSW Fire and Rescue, police and ambulance, and SES were headed to the area as part of a “multi-agency response”, she said.

NSW Police said Lismore’s flood was “worsening”, with hundreds of calls for assistance, and the search for a man missing in floodwaters suspended until conditions allow it to resume.

The BOM has issued a severe weather warning for the northern rivers and parts of the mid-north coast and northern tablelands with the potential for life-threatening flash flooding.

Major flood warnings have been issued for the Tweed River, with major flooding at Murwillumbah, Tumbulgum and Chinderah. Many roads are cut and the State Emergency Service is warning people to heed warnings and avoid entering floodwaters.

South Murwillumbah has also been evacuated as roads are cut and the only way out is by boat.

The SES ordered the town of Mullumbimby to evacuate on Monday morning, with the area threatened by rising floodwaters from the Brunswick River.

Fire and Rescue and the SES have been door knocking to ensure people evacuate.

One NSW life has already been lost, with a man killed when his LandCruiser was carried away by floodwaters on the Central Coast, north of Sydney, on Friday.

The flood toll in Queensland has risen to eight, with flash flooding in the south-east on Monday, and thousands of homes and businesses about to be inundated in Brisbane.

Queensland Police said on Monday a 59-year-old man had died at Fitzgibbon, in Brisbane’s north, on Sunday afternoon.

He was trying to cross Cabbage Tree Creek on foot when he was swept away before being pinned against a fence.

Two people raised the alarm and tried to give the man CPR, but he died at the scene.

Elsewhere, Queensland Fire and Emergency Services warned of life-threatening flash flooding in the Tallebudgera and Currumbin valleys on the southern Gold Coast on Monday morning.

“Shelter in place unless it is unsafe to do so. Access to area is cut and inaccessible in multiple places,” it said in an alert.

QFES have made more than 100 swift-water rescues amid 8000 calls for help in the Brisbane, Ipswich, Sunshine Coast and Gold Coast since 3pm on Sunday

There are multiple emergency flood alerts for about 140 Brisbane suburbs, with 2145 homes and 2356 businesses expected to be fully submerged on Monday morning’s high tide. Up to 15,000 homes in total were expected to be affected.

Premier Annastacia Palaszczuk said the flood had peaked at 3.85 metres on Monday, and water was beginning to fall.

“I think everyone would agree, no one has seen this amount of rain in such a short period of time over our entire south-east catchment zone,” she said.

Diana Eadie from the Bureau of Meteorology said the flood risk remained real, even as intense rain eased over most of south-east Queensland.

“The threat continues for far southern parts of the Gold Coast area and the Scenic Rim. Please keep updated for any warnings that get issued in those areas,” she said.

Further lower peaks were also likely on the Brisbane river – about 3.3 metres at 8pm (QDT) Monday and about 3.7 metres at 9am Tuesday.

The state government has told people to work from home and closed all schools in the south-east’s 13 local government areas on Monday.

Transport Minister Mark Bailey said major roads, including the Gateway Motorway, Bruce and Warrego Highways were cut and trains and ferry services across Brisbane had been halted.

He urged people to stay at home.

“There’s still a lot of localised flooding all through south-east Queensland, including the Sunshine Coast,” he told ABC Radio on Monday.

“People need to be careful still make safety their priority.

“We’re going to have localised flooding in a lot of areas for a couple of days yet.”

There are unconfirmed reports of looting in the Ipswich area. Police Commissioner Katarina Carroll said officers were investigating.

Donald Trump grabbed at steering wheel in bid to get to Capitol riot
Rivers in sky: The weather system bringing floods to Qld more likely under climate change
Today's Stories