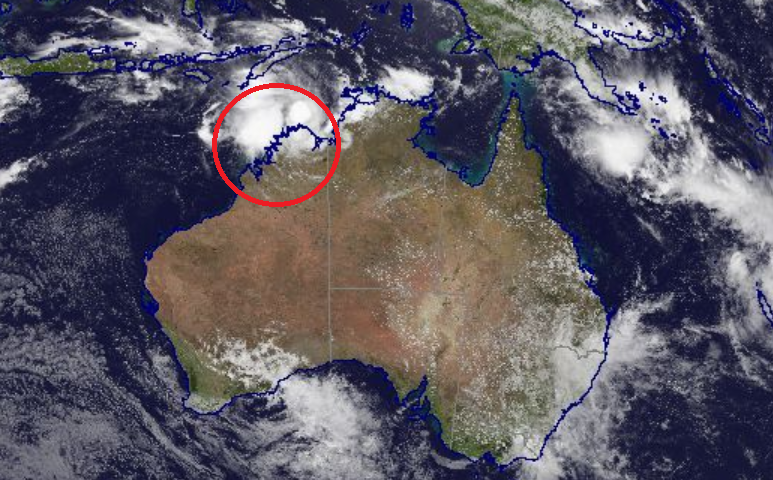 Cyclone Anika (circled) was bearing down on the Kimberley early on Saturday afternoon AEST.Image: BoM

Western Australia and Northern Territory residents are on alert with Cyclone Anika set to make landfall packing destructive winds of up to 130km/h in the next 24 hours.

The category one system is set to intensify into a category two cyclone before it crosses WA’s Kimberley coast between Kalumburu and Wyndham on Saturday night or Sunday morning, the Bureau of Meteorology says.

Tides along that coastline are likely to rise above the normal high tide level bringing very rough seas and flooding low-lying areas.

The forecaster is warning people in the area between Kalumburu and Wyndham, but not Wyndham itself, to prepare.

“You need to take action and get ready to shelter from a cyclone,” the BoM said in a statement on Saturday.

Gales of up to 100km/h are also expected along the Kimberley coast to the NT border with the potential of gales as far east as Dundee Beach by Saturday afternoon.

Heavy rainfall is expected along the northern Kimberley coast and is possible as far east as the Tiwi Islands and the western parts of the Daly River area.

The forecaster has warned that if Cyclone Anika moves back over the ocean after crossing the coast, it could reform and strengthen again.

“If the system moves further west and remains further offshore for longer there is also potential for development of a more intense tropical cyclone,” the BoM said.

Meanwhile, the much more intense category four Cyclone Vernon, which is packing winds up to 260km/h, is about 710km off the Cocos Islands and barrelling west.

The forecaster said the system poses no threat to the Australian territory and it will hand over forecast duties for the cyclone to authorities in the French territory of Reunion.

The Kimberley braces as Cyclone Anika bears down