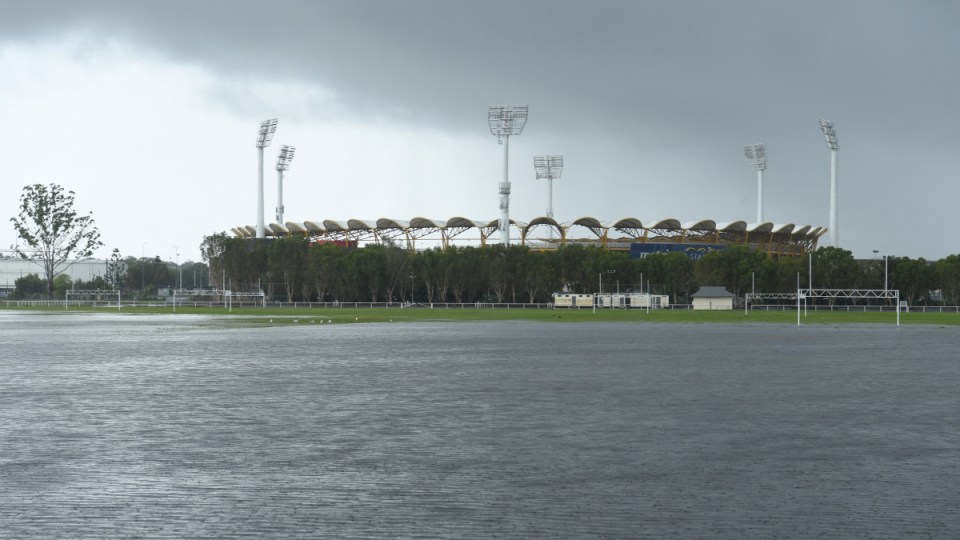 Floodwaters cover a football field at Carrara on the Gold Coast, with more rain on the way on Friday. Photo: AAP

Evacuations have been ordered in Queensland, as the deadly weather system that has flooded parts the state’s south-east and northern NSW appears set to get even more dangerous.

Late on Friday afternoon, authorities ordered an evacuation in the Lockyer Valley, fearing flooding might get rapidly worse with hundreds of millimetres of rain forecast.

“This is a dangerous, evolving situation, with life-threatening flash flooding occurring,” the weather bureau tweeted on Friday afternoon.

It came after NSW Police confirmed on Friday morning that the body of a 54-year-old man had been found in a vehicle in floodwaters at Matcham, on the NSW central coast.

The tragic discovery came after two Queenslanders were already confirmed to have died in floods triggered by this week’s trough. A 54-year-old man was killed when trying to ride a motorbike through rising water at Gympie and a 63-year-old woman’s body was found in a submerged car on the Sunshine Coast.

A swathe of both states is reeling from a slow-moving low pressure system that has dumped up to 600 millimetres of rain in some regions this week.

The BOM warned up to 300 millimetres of rain may inundate the region where the trough crosses the east coast.

“Judging by satellite images the system is likely to impact the coast by Friday morning,” BOM’s Brooke Pagel said.

“We don’t know the exact location, whether it is Sunshine Coast, Gold Coast or down towards the NSW border.

“But because it is so slow moving, intense rainfalls are likely to be wherever it makes landfall so there is the risk of flooding as well.”

On Thursday afternoon, the bureau issued a severe weather warning from Maryborough to the NSW border, with the weather system sitting off the Sunshine Coast.

Heavy rain is not expected to ease in Queensland’s south-east and northern NSW until Saturday due to the slow-moving trough.

In NSW, the BOM has forecast showers and potential flash flooding, moving from the state’s north-east to the northern rivers region on Friday with falls of up to 100 millimetres.

Kyogle and Grafton can expect about 160 millimetres.

Towns near Grafton and Ballina have already had about 425 millimetres and 240 millimetres of rainfall respectively.

Torrential rain is also expected to continue on the north coast of NSW as Sydney rounds out what is likely to be its wettest summer in three decades.

Bureau of Meteorology meteorologist Dean Narramore said isolated rainfall totals in some areas stretching from Byron Bay in NSW up to K’Gari Island in Queensland could exceed 300 millimetres in coming days.

“This is a dangerous set-up as very heavy rainfall falls over already saturated soils,” Mr Narramore said on Thursday afternoon.

He warned people living near rivers or creeks their homes could be inundated and there was a risk of dangerous flash flooding.

The SES has issued an evacuation warning for low-lying areas along the Nambucca River and doorknocked homes around there overnight.

Some 630 callouts were received by the SES in the 24 hours up to 6am Thursday, with 27 flood rescues, predominantly from vehicles.

Many of the calls for help were for sandbagging to protect against flooding and for damaged roofs.

The northern rivers, mid-north coast and central coast were the areas of concern for the SES on Friday.

SES Assistant Commissioner Dean Storey told the ABC on Thursday there is a “very concerning weather system … sitting just off the coast and due to make landfall”.

“Preliminary data suggests that this has been Sydney’s most humid summer in 10 years,” he wrote on Twitter.

“La Nina and a marine heatwave in the Tasman Sea contributed to this muggy season.”

Sydney was having its wettest summer in 30 years with its seasonal rainfall hitting nearly 520 millimetres after being lashed with more than 120 millimetres in 48 hours, Mr Domensino said.