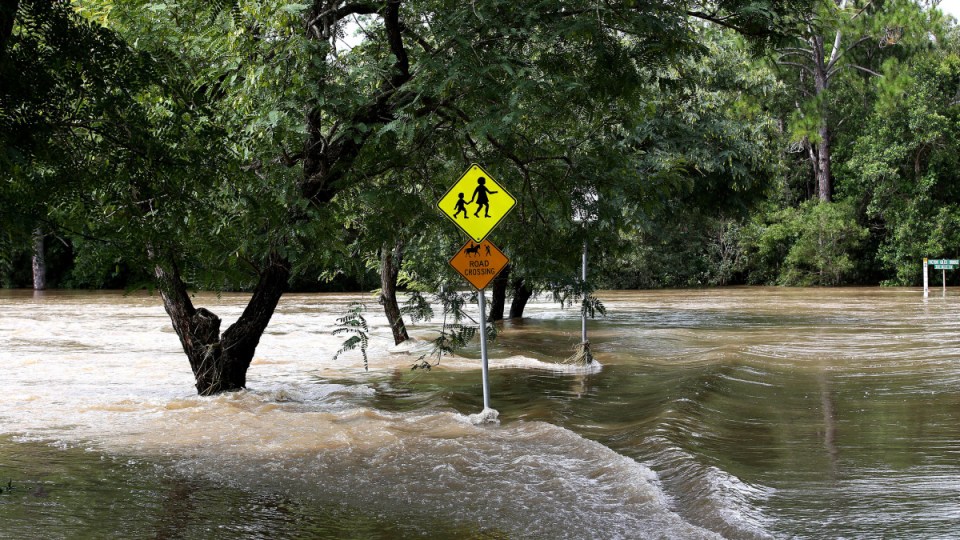 Queensland is preparing for more rain as a dangerous weather system threatens to re-intensify. Photo: AAP

There are grave fears for a motorcyclist missing for more than a day after flooding in south-eastern Queensland, with another drenching on the way for the cross-border regions.

The 54-year-old man’s motorcycle helmet was found near Gympie on Wednesday and there are fears he was swept away while trying to negotiate the deluge around Cedar Pocket.

He had still not been found by Thursday afternoon.

South-eastern Queensland and northern NSW have endured days of intense rainfall stems a slow-moving storm system that has triggered flash flooding and has already claimed one life.

The body of a 63-year-old woman was found submerged in a vehicle that had been swept into raging stormwaters west of Eumundi on the Sunshine Coast on Wednesday morning.

On Thursday afternoon, storm clouds were again gathering. Emergency officials warned of a “concerning weather system” off the coast that was tracking towards land, with widespread rain predicted to last for another week.

The Bureau of Meteorology also said there was an increased chance of unusually high rainfall – in the top 20 per cent of historical records – for much of eastern NSW in the next three months.

Parts of NSW’s far north coast had more than 240 millimetres of rain in the 24 hours to Thursday morning, with six people rescued from flood waters.

In Queensland, up to 600 millimetres of rain fell in the south-east on Wednesday and at least another 300 millimetres is expected on Thursday, with a raft of severe weather warnings issued.

Queensland Fire and Emergency Services Deputy Commissioner Mark Roche SES said the organisation had dealt with more than 240 incidents since 5am on Wednesday, including 19 rescue jobs.

“We’ve got quite a number of SES volunteers prepped and ready to provide support where needed … mainly around the south-east corner and on the north coast,” he told the Nine Network.

“But we are saying to people they need to take responsibility as well” and not enter flooded areas.

NSW SES Assistant Commissioner Dean Storey said emergency crews had taken more than 1100 calls for help in the Sydney area in the past 48 hours.

“Our focus is now very much shifting to that north coast and the far north coast of NSW with that very concerning weather system … sitting just off the coast and due to make land fall,” he told the ABC on Thursday.

Communities are being urged to be aware of risks in their local areas and monitor changing forecasts.

“If you live in a flood-prone area, know what you would do and your family would do if you needed to evacuate your home,” Mr Storey said.

“It’s been a very wet summer. The soil is saturated, rivers are full, dams are full.

“Any additional rainfall will have a very concerning effect than it would in a normal area.”

On Wednesday, Queensland Premier Annastacia Palaszczuk warned the weather system had “the potential to be a significant rainfall event for south-east Queensland”.

The Bureau of Meteorology has issued a general flood warning for south-east Queensland amid signs the weather system will intensify through Thursday and into Friday. Damaging winds are also expected.

In NSW, there are severe weather warnings for Tenterfield, Dorrigo and Bellingen, which will likely continue to Friday.

The BOM said six-hourly rainfall totals of 70-100 millimetres were likely, increasing to 100-160 millimetres over areas east of Kyogle and Grafton.

An initial flood watch was issued for parts of the northern rivers and mid-north coast on Wednesday afternoon, affecting the the Tweed, Brunswick, Wilsons, Richmond, Orara, Bellinger and Nambucca Rivers.

The rain is being caused by a strong upper trough and low-pressure system, which will move slowly in a southern direction across Queensland on Thursday.

A surface trough on NSW’s north-east coast is deepening as it responds to the upper system. It will move slowly on Thursday and Friday, producing heavy, persistent rainfall and thunderstorms on those days.