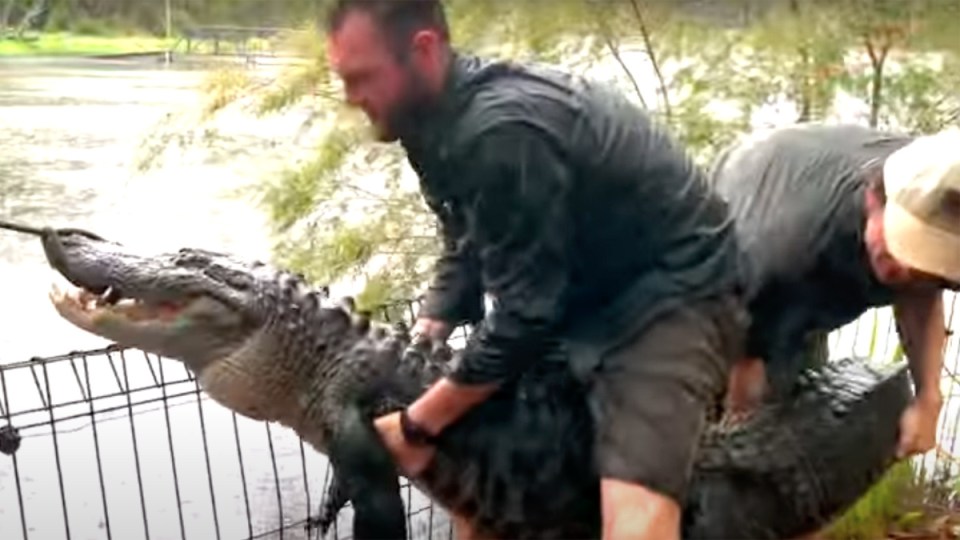 An alligator has been rescued and returned to its proper home after escaping a NSW wildlife park during torrential rainstorms that lashed Sydney and surrounds.

The “massive” American alligator was safely relocated back to its lagoon by keepers at the Australian Reptile Park, near Gosford on the NSW central coast, after rapidly rising water levels allowed him to swim over an internal boundary fence at the park.

“We found him in a tricky spot this morning before the park opened. Although there was no danger of him breaching the main boundary fence near visitors, there was still no way he would have been able to get back into the lagoon on his own,” head reptile keeper Jake Meney said on Tuesday.

“You never really know the temperament of an alligator so although this guy was pretty happy to be relocated, we have to be prepared for him change his mind at any stage.

“This dangerous task was heightened even more by the torrential rain that did not let up, making the ground and the gator incredibly slippery.”

The tricky rescue came as torrential rain lashed much of Sydney and surrounding areas on Tuesday, with more downpours forecast for the rest of the week. Gosford was particularly hard hit.

SES controller Rolf Garda, who was in Gosford when the storm hit on Tuesday morning, said it was relentless.

“It was just like a main river – just waterfalls everywhere, just walls of water,” he told the ABC.

Early on Wednesday, the weather bureau issued a warning for severe storms in the Illawarra.

“Severe thunderstorms with heavy rainfall possible over this area for the next few hours, which may lead to flash flooding,” it said.

There are also flood warnings for parts of south-east Queensland, where up to a metre of rain is expected in coming days.

Wednesday’s warning came as the NSW State Emergency Service reported it had received more than 800 calls for help since heavy rain began falling on Tuesday morning.

Rescue crews have attended at least 15 flood rescues across Sydney and the central coast, with 450 callouts statewide.

“We are imploring you with 15 flood rescues in inner-Sydney and up at the central coast, that’s too many… Please don’t drive through floodwater,” the SES said.

Flash flooding inundated a host of Sydney suburbs on Tuesday afternoon, with at least 110 millimetres falling at Marrickville in the inner-west.

Wyong in the Central Coast was battered by 80 millimetres in 45 minutes.

The Bureau of Meteorology said Sydney was likely to receive up to 10 millimetres of rain every day until Saturday. Areas further north, including Byron Bay, can expect up to 45 millimetres on Wednesday and up to 60 millimetres on Thursday.

Forecaster Weatherzone warned “large areas of eastern Australia will be stuck in a stormy weather pattern…that could see several hundred millimetres of rain this week”.

The storm system is also hitting south-east Queensland, with an emergency alert to residents in the Gympie local government area warning of flash flooding early on Wednesday.

“Residents are being advised that roads and bridges may be impacted,” Gympie Regional Council said.

The Bureau of Meteorology’s Jonathan How said everyone needed to take care because conditions could become “quite treacherous”.

He said heavy rain was expected on Wednesday in south-east Queensland, including Brisbane and the Gold Coast. It would continue for several days.

“We could see up to a metre of rain for parts of south-east Queensland,” Mr How told the Nine Network.

“It will be quite treacherous out there.”

Gympie had more than 300 millimetres of rain from 9pm Tuesday to 3am Wednesday.

Flood warnings are current for the Mary River and parts of the Sunshine Coast.

Meanwhile, Seqwater said water spills from the Somerset and North Pine dams were possible in the next 48 hours due to the rain.