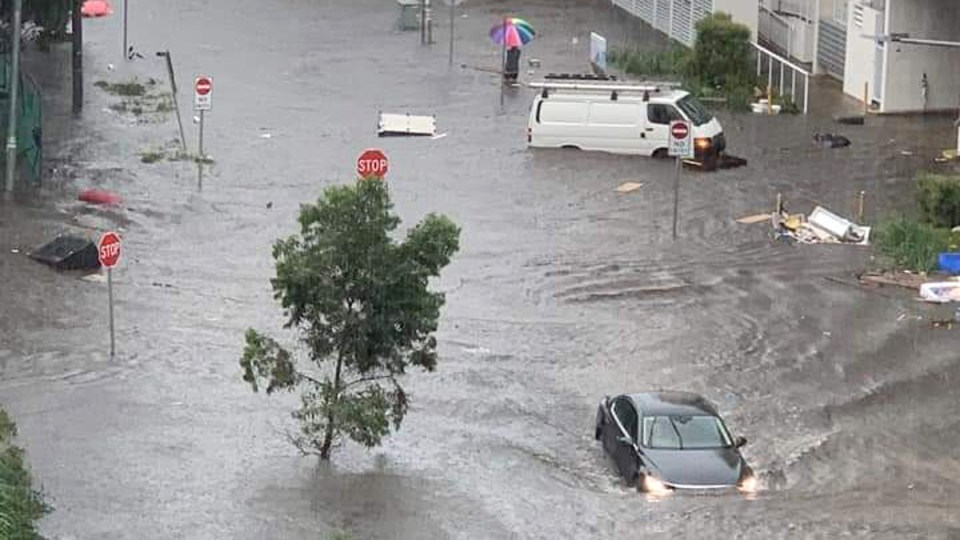 A woman’s body has been found in a submerged car and another 10 people are missing after intense rainfall triggered flash floods in south-east Queensland.

The 60-year-old’s body was found in the vehicle near Skyring Creek at Belli Park, west of Eumundi on Sunshine Coast, just after 8am on Wednesday.

“This is indeed a tragedy during this particular time,” she told parliament.

Sunshine Coast Police District Superintendent Craig Hawkins said another 10 people were unaccounted for in the Noosa Hinterland area and another search was underway for a man whose motorcycle was found near Gympie.

“We are searching for some people at the moment, particularly again around that Belli Park area,” he said.

“We’re hopeful that it’ll be a good outcome, but certainly we are searching for some people that are that are outstanding.”

Queensland’s flood tragedy came as forecasters warned up to a metre of rain might fall in some areas within 48 hours – and as other parts of the country also faced dangerous downpours.

Rain that has drenched Sydney and the central coast of NSW is expected to continue into next week, even after some areas have already endured more than a month’s rain in 24 hours.

The heavy falls sparked flash flooding in parts of Sydney and hundreds of requests for help to the State Emergency Service on Tuesday and Wednesday.

Further south, there were also warnings of dangerous thunderstorms for parts of Victoria on Wednesday.

In Queensland, swiftwater teams had made 23 rescues in the Sunshine Coast and Gympie regions by 9am on Wednesday following 12 hours of intense rainfall.

Emergency alerts have also been sent to Gympie, Noosa and Sunshine Coast residents warning that flash flooding may affect roads and bridges.

Seven schools were closed on Wednesday, and buses replaced train services on the Sunshine Coast due to the severe weather and after a freight train derailed between Traveston and Cooran about 3.20am.

QR acting chief executive Scott Riedel said the driver, who was the only person aboard, was shaken but not injured.

The Bureau of Meteorology has issued a general flood warning for southeast Queensland after up to 408 millimetres of rain fell in some areas, with more on the way.

The worst-hit areas are the south-east Coast and the Wide Bay-Burnett region, including the Mary River, where major floods earlier this year killed three people and damaged dozens of homes and businesses.

Ms Palaszczuk warned that up to a month’s rain could fall in some areas on Wednesday and Thursday.

Superintendent Hawkins urged people to reconsider their need to travel over the next 48 hours.

“We are making people will aware that a weather event is coming, we’ve seen the start of it we can see another two days of it,” he said.

“It’s not I’m not saying whether it’s worse or not, all I can say is that we have seen significant rain in the last 24 hours and we’d like to see a lot more coming the next next few days.”

Drivers in NSW were also urged to avoid flooded or debris-strewn roads and seek alternative routes, ahead of more rain on Wednesday.

Many Sydney suburbs had more than 100 millimetres of rain on Tuesday, with more storms forecast.

Many roads were flooded and ferry services cancelled between Parramatta and Sydney Olympic Park on Wednesday due to flooding and debris on the swollen Parramatta River.

The SES received 256 requests for help from 6pm on Tuesday until 8.30am on Wednesday, mostly from the Sydney metropolitan area.

Marrickville in Sydney’s inner-west copped the heaviest falls, getting 169 millimetres of rain in the 24 hours from 9am on Tuesday.

On the central coast, Wyong had 160 millimetres of rain and Kulnura 102 millimetres.

At Gosford, the heavy rain allowed an alligator to escape its lagoon enclosure at the Australian Reptile Park, leading to a risky and rapid rescue by keepers.

The SES was involved in flood rescues at Schofields in western Sydney and Collaroy on the northern beaches.

In northern NSW, there was another rescue at Urliup, north of Murwillumbah near the border with Queensland.

BOM meteorologist Bradley Wood told ABC radio on Wednesday the intensity of the rain had eased.

“But we are still seeing persistent showers coming across the coast, and they’ll continue much of today and really for the foreseeable future,” Mr Wood said.

South of Sydney in the Illawarra, bureau warned “a constant feed of thunderstorm activity” was likely to produce heavy rain on Wednesday.

A slow-moving trough was expected to produce “heavy to intense” rain and the possibility of severe weather in the NSW northern rivers, which could cause flash flooding.

South of the Murray, the weather bureau also issued a warning for thunderstorms across a broad area of Victoria on Wednesday afternoon.