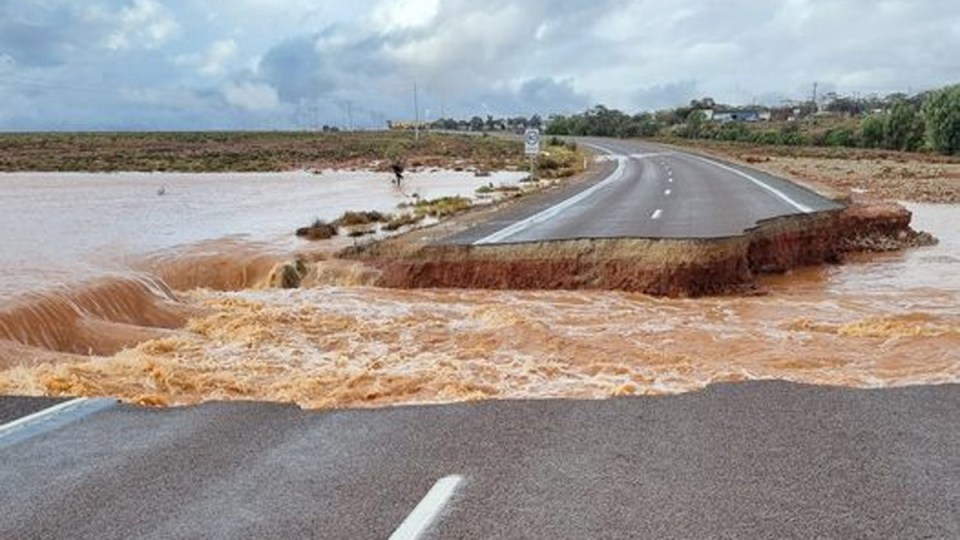 The mining town of Roxby Downs has been cut off and the rail link between Adelaide and Western Australia damaged after heavy rain across much of South Australia.

Other regional roads have also been cut and flood warnings continue for large parts of South Australia after a weekend of drenching rain, amid fears of possible food shortages.

Flood warnings on Monday covered much of Eyre and Yorke Peninsulas, and parts of the Flinders Ranges. The State Emergency Service said multiple roads across those regions were either damaged or covered in debris.

“While widespread intense rainfall is not expected across the warning area, heavy rain with isolated thunderstorms is still likely,” it said.

SES crews rescued at least 11 people near Coober Pedy as floodwaters cut off remote communities and washed away part of the Olympic Highway – the only sealed road between Woomera and Roxby Downs – on Sunday.

Local roadhouses, pubs and caravan parks posted to social media  photos of ochre-coloured floodwaters flowing over part of the bitumen highway, which had sunk about two metres.

Roxby Council chief executive Roy Blight said it was too early to tell when the highway would be ready for traffic.

“The road to the south is vitally important, from a community access point of view, and, obviously, for supplies into Olympic Dam,” he told the ABC late on Sunday.

He said some people had been forced to cancel medical appointments, including surgeries, in Adelaide, because of the ruined road.

“The other issue obviously is the matter of supply – of food, fuel – into Roxby Downs, together with essential materials for the operation of Olympic Dam,” he said.

BHP’s Olympic Dam mine site is just a few kilometres from Roxby Downs, and much of the town’s population of about 4500 is transient mine workers.

Mr Blight said the mine was continuing to operate.

Elsewhere, the floodwaters have also reportedly damaged the rail line between Adelaide and Kalgoorlie. Deliveries between SA and WA may be affected for up to a week.

Earlier, the SA State Emergency Service had warned the remnants of Cyclone Tiffany were likely to produce heavy rainfall in Port Lincoln, Whyalla, Cleve, Woomera, Tumby Bay and Kimba on Sunday and into Monday.

“Severe thunderstorms are likely to produce heavy rainfall that may lead to flash flooding in the warning area over the next several hours,” the SES said in a statement.

The storms and heavy rain are expected to continue on Monday – and will move north and east. Parts of NSW and Queensland have been warned to expect showers and thunderstorms, with potentially heavy or intense rainfall from Monday.

SA’s Department of Transport and Infrastructure said several roads on Eyre Peninsula and across the state’s north remained closed. Others were accessible only by four-wheel-drive.

Department chief executive Tony Braxton-Smith told a parliamentary committee on Monday that crews were working to restore the Olympic Highway.

“As you know there’s been record rains. I think it’s been characterised as a one in 100-year event.,” he said.

He said those roads were being progressively reopened.

After Saturday’s heavy falls, the Bureau of Meteorology said widespread rain continued on Sunday. Totals ranged from about 50 millimetres in several centres to as much as 108 millimetres at Price on Yorke Peninsula.

Tumby Bay also received 90 millimetres in the past 24 hours and Kadina had 86 millimetres.

Bureau meteorologist Vince Rowlands said such heavy rain across SA was uncommon in January with the last such significant event dating back to 1946.

It could result in many areas posting record rainfall totals for the month. The unseasonal conditions are the result of an upper-level low and associated surface trough that formed over the west of the state and moved slowly eastwards.