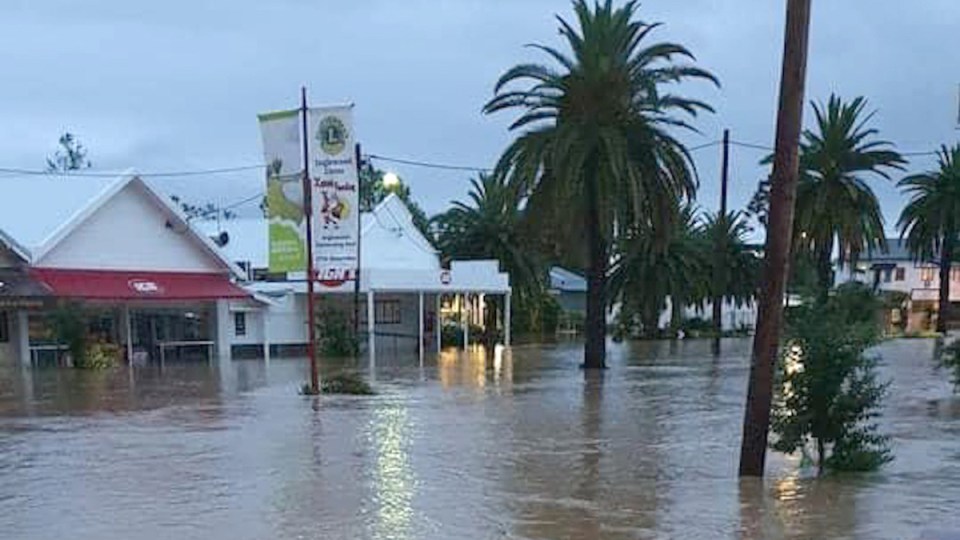 More than 900 people were evacuated when floodwaters rose in Inglewood on Wednesday. Photo: Twitter

More than 900 people have been evacuated as floodwaters threaten towns and villages southern Queensland amid a continuing deluge.

There have also been emergency rescues near Inglewood, in the Goondiwindi local government area, in the Darling Downs close to the NSW border, as rising rivers surged.

Late on Tuesday, Inglewood residents were given just an hour’s warning after Queensland police issued an emergency evacuation order on Tuesday night. Residents were told to head to an assembly point at Inglewood Cemetery ahead of widespread flooding expected on Wednesday.

“Significant flooding is expected to occur across the township in coming hours,” police said.

“Our crews were working through the night assisting that operation,” he told Nine Network on Wednesday.

Mr Smith noted there was widespread flooding across central Queensland, as well as the state’s north, south-east and south-west.

“Overnight there were areas that got up to 180 millimetres of rain,” he said.

On Wednesday, local mayor Lawrence Springborg said it had been an anxious night for Inglewood residents.

“We had to make the decision to evacuate at 9pm, after being informed at 8pm that the situation as worsening and we were able to bring people to a couple of evacuation points,” he told the ABC.

But he said floodwaters had started to recede by the morning.

“The police have already started to let some people back in to one part of Inglewood where the floodwaters have receded and it will be some time, I’d imagine, maybe a couple of hours or so, little bit more, before they can go back into the other areas of town,” he said.

“They’re anxious to get back there to assess their properties.”

The emergency warning for Inglewood remained on Wednesday morning, while there was also an emergency alert for nearby Leyburn.

Authorities were also monitoring other rivers in central and south-eastern Queensland, with major flood warnings for several districts.

“We know there were a number of properties that would’ve had buildings potentially inundated or affected by floodwater,” he told the ABC.

The Bureau of Meteorology also reports the Logan River is flooding at Beaudesert, south of Brisbane, for the second time in four days.

Floodwaters peaked at 10.1 metres in the town of 6400 residents on Saturday, above Beaudesert’s major flood level of 8.3 metres.

The forecaster expects the river to peak at 10.2 metres on Wednesday after up to 100 millimetres of rain in parts of the already soaked catchment in the past 24 hours.

Closer to Brisbane, heavy rainfall is causing major flooding along Warrill Creek with about 600 residents in Harrisville on alert.

The creek was at 5.02 metres on Wednesday, above the town’s major flood level of five metres, and was still rising.

Near the NSW border, the Dumaresq River is also putting homes and businesses in the town of Texas at risk of major flooding with up to 70 millimetres of rain upstream since 9am on Tuesday.

More than 840 residents of the southern town are preparing for the river to exceed a major flood level of eight metres on Wednesday night.

Parts of Chinchilla and 200 residents in the village of Pratten are also on alert as the Condamine River reaches moderate flood levels in the regional centre of Warwick.

The river level is at 9.1 metres at Chinchilla Weir, above the moderate flood level of eight metres, and could exceed 10 metres on Wednesday, the BOM said.

About 870 residents in Taroom are also being warned the Dawson River could peak at a major flood level of seven metres overnight on Wednesday.

Southeast of Brisbane, the Bremer River is moderately flooding at the towns of Rosewood and Walloon, and the Ipswich suburb of Amberley.

SEQ Water has mobilised its flood operations centre – with at least 11 ungated dams spilling in the south-east. It said the situation was of “critical severity”.

The utility said has started flood releases from the gated North Pine Dam, north of Brisbane, amid forecasts of heavy rain.

With the Bureau of Meteorology predicting more wet weather in coming days, Premier Annastacia Palaszczuk has warned Queenslanders to get ready for the storm season that has come early this year.