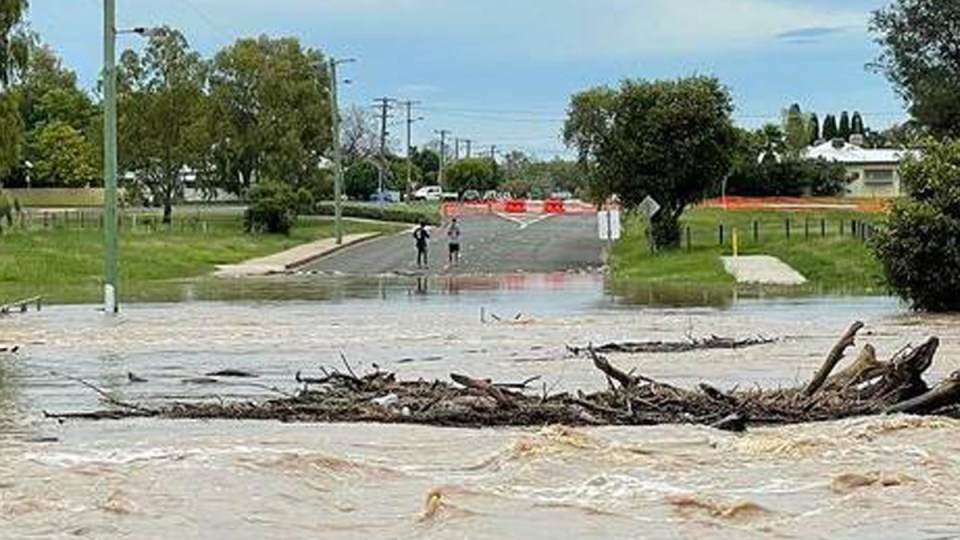 Narrabri, in northern NSW, is one of many towns on flood watch on Friday. Photo: Twitter

A man has died as the flood crisis engulfing eastern Australia turns deadly, and fears escalate for suburbs downstream of Sydney’s biggest dam.

A passer-by found the man’s car early on Friday in Hibernia, west of Rockhampton, and alerted police.

Officers and emergency services were still working to retrieve the ute on Friday afternoon. Recovery was expected to take some time, partly due to continued bad weather.

“The male driver and sole occupant of the vehicle has been located deceased,” a spokesperson said in a statement.

There has been up to 270 millimetres of rain in the area in the 48 hours to Friday, leading to flash flooding.

Elsewhere, WaterNSW said Sydney’s Warragamba Dam was expected to spill on Friday night, as continued rain pushed it beyond 100 per cent capacity.

WaterNSW warned of “downstream impacts” for western Sydney suburbs, following the release of water. Minor flooding was expected on the Hawkesbury-Nepean river system, into which the dam feeds, later on Friday.

Floodwaters are also rising elsewhere as rain continues to fall on saturated ground.

There are also warnings in Victoria and Queensland, which will not escape another drenching as Australia’s wet November continues.

In NSW, almost 60 millimetres fell overnight at Byron Bay, Coonamble and Gunnedah, while Dubbo had 66 millimetres. But the 24-hour record fell to Wagga Wagga, which had 70 millimetres.

There was concern on Friday afternoon for Scone in the Upper Hunter, where farmers were moving livestock ahead of more predicted rain. Scone Racecourse had opened its stables to evacuated animals fleeing the floodwaters.

The weather bureau said major flooding was occurring at Kingdon Ponds and minor flooding was likely along the Upper Hunter River at Muswellbrook and Denman.

“The Scone at Kingdon Ponds is currently at 3.80 metres and near its peak, with major flooding,” the Bureau of Meteorology said in a flood warning issued on Friday afternoon.

“The Hunter River at Muswellbrook is likely to reach the minor flood level (7.20 metres) Friday afternoon. Further rises are possible.

“The Hunter River at Denman is likely to reach the minor flood level (6.50 metres) overnight Friday into Saturday. Further rises are possible.”

Other towns, including Newcastle, Gosford, Maitland, Tamworth, Gunnedah and Narrabri were also on floodwatch on Friday. Some regional and remote towns face the prospect of isolation, with floodwaters cutting off major road corridors.

In northern NSW, the small town of Wee Waa faces more than 10 days cut off from the rest of the state after being isolated by flooding on Thursday night. The Namoi River has reached 7.07 metres, 37 centimetres above the predicted river height.

“We’ll be keeping a very close eye [on the community] and managing any resupply issues that arise by boat or by using helicopters,” he told the ABC.

“If there’s a medical emergency and the hospital isn’t able to deal with it, we have helicopters on stand-by in Narrabri to transport patients out of town.”

The Kamilaroi Highway in northern NSW was closed between Wee Waa and Narrabri, as well as between Curlewis and Breeza, and Gunnedah and Boggabri.

Henry Lawson Way between Forbes and Grenfell was closed in the central west, along with the Cobb Highway between Ivanhoe and Wilcannia, and the Silver City Highway between Broken Hill and Queensland.

Many other local roads are affected and the risk of flash flooding from heavy rain could close more.

Riverine flooding is threatening many towns across the state, with the rainfall causing a bevvy of inland rivers to surge.

There is still major flooding on the Lachlan River in NSW central west, with floodwaters coursing through Jemalong on their way to Condobolin.

However, Forbes residents have been given the all-clear to return home after the river in the town fell below minor flood levels.

The Castlereagh River, also in NSW central west, has reached moderate flood levels, with Mendooran and Gilgandra expected to feel the impact.

Floodwaters have crept into Molong, with the creek in the town at moderate flood levels, and similar levels are expected along the Bell River at Wellington from midday.

Minor flooding continues along the Macquarie River at Wellington Bridge.

In Queensland, there are widespread alerts for minor to moderate flooding across the state’s south.

“A continuation of heavy rainfall is expected to continue during Thursday and Friday with the heaviest rainfall expected in the central west, and Central Highlands and coalfields and then in catchments along the coast between Rockhampton and Hervey Bay,” the BOM said.

“Very heavy rainfall rates are possible for some areas particularly in association with thunderstorms, which are likely to cause localised flooding.”

In Victoria, there are flood warnings for the Murray River upstream of Lake Hume and the Kiewa River, and a flood watch for East Gippsland and the Mitta Mitta catchment.

Many of the areas impacted by the deluge in recent weeks have been farmland, with growers watching paddocks disappear underwater and their crops destroyed after many years of drought conditions.

That has prompted the NSW Farmers Association to call for a statewide natural disaster declaration so relief funds can be accessed.

The rainy weather is unlikely to ease significantly any time soon, with the BOM’s outlook for the summer in NSW predicting ongoing wet conditions.

Australia is on track for its wettest spring in a decade and some regions in NSW have already received more than three times their normal rainfall for November.