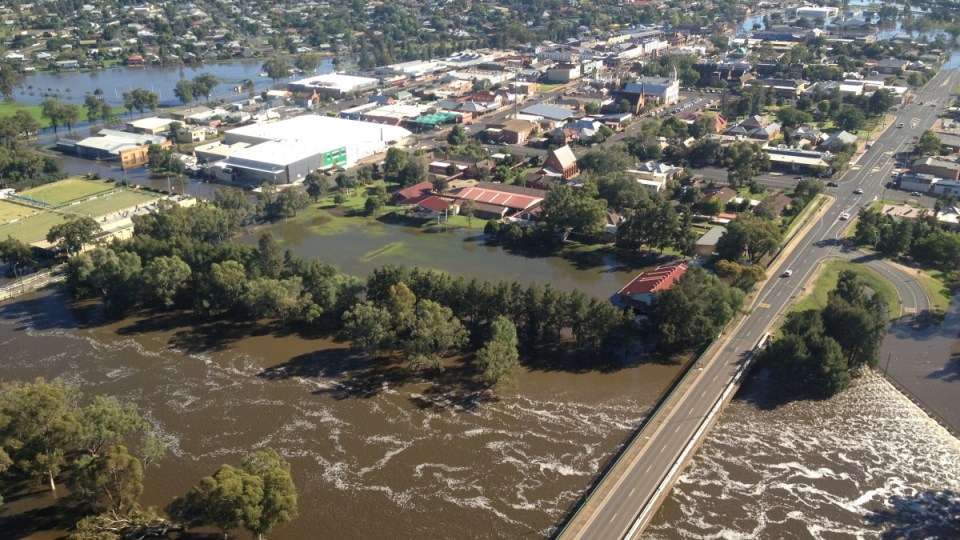 Forbes residents are ready to evacuate if the Lachlan river floods, as it did in 2012 (pictured). Photo: AAP

Thousands of people in the NSW central west have been warned to prepare to evacuate as the Lachlan River floods and a severe wind warning has been issued for parts of the state’s south-east.

More than 8000 people in the town of Forbes are in the path of the floodwaters, which are rising upstream.

The Bureau of Meteorology has predicted possible major flooding higher than floods in 2016.

“Even though the rainfall has stopped, the flood is still in motion,” Justin Robinson from the BOM said on Monday afternoon.

“During the past few days we have seen moderate flooding upstream at Cowra and the floodwaters are now at near Nanami. The river levels are higher than they were in 2016. Now we are concerned about how this will impact the community of Forbes.

“We are obviously concerned that the flood levels at Forbes may reach levels as high as 2016, and even possibly higher.”

The river is expected to hit major flood levels overnight on Tuesday, peaking on Wednesday morning.

The State Emergency Service has warned locals in up to 800 homes to prepare to move to safety before the flooding hits the town.

“If you are in Forbes your best opportunity is to start preparing your home or business and make arrangements to move to safety before flooding starts affecting you,” it said.

“The situation is likely to change and it can escalate quickly.”

Chief Superintendent Greg Swindells, from the NSW SES, said there had been about 1500 calls for help from the Forbes area since the rain began last week. About 100 were for sandbagging.

“Yesterday afternoon, we issued an evacuation warning, provided by the guidance received from the bureau,” he said.

“It could be updated to an evacuation order to properties around Forbes township on the low-lying areas – that could come up later this afternoon or in the evening.”

Forbes Shire Council mayor Phyllis Miller said it was a positive sign that only 40,000 megalitres of water was being released from Wyangala Dam on Monday, down from 100,000 megalitres in recent days.

“We’re a flood town, we’re used to it,” she told the Nine newspapers.

“You prepare the very best you can and hope for the best.

“We’re hoping we don’t get any further rain that will cause us grief.”

A strong cold front has moved off the east coast and a vigorous westerly flow was gradually easing.

Damaging winds, averaging 60 to 70km/h with peak gusts in excess of 90km/h are possible over parts of south-east NSW until mid-morning on Monday.

Blizzard conditions are possible for alpine areas above 1700 metres in the same period. Thredbo recorded a 111km/h wind gust on Sunday and Perisher had gusts of 98km/h.

Locations that may be affected include Wollongong, Nowra, Bowral, Katoomba, Goulburn, Cooma, Thredbo and Mount Ginini.

Meanwhile, in Forbes St Andrews Church has been set up as an evacuation centre as residents are urged to be on high alert for an SES evacuation text message.

People were sandbagging properties after the Wyangala Dam, near Cowra, on the Lachlan River overflowed on Sunday.

“Residents should monitor the situation and be prepared to evacuate when instructed to do so,” SES spokeswoman Andrea Cantle said on Monday.

Downstream from Forbes, major flooding is also expected at Cottons Weir and Jemalong from Monday.

A flood evacuation order will be issued by the NSW SES via text message if it goes ahead.

There are also flood and wind warnings across the border in Victoria.

There are moderate flood warnings for the Gippsland lakes and south Gippsland rivers, in the state’s east, and parts of the Yarra River.

There are wind warnings for similar areas, including Port Phillip.