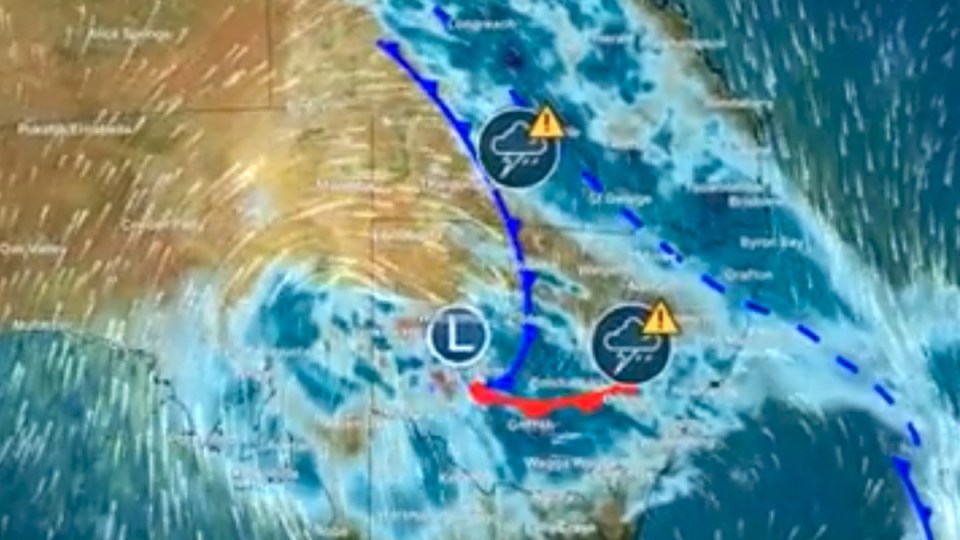 Wild storms hit NSW and Queensland, with more on the way for areas further south on Friday. Photo: BOM

NSW is in for another day of heavy rain and thunderstorms, while Victoria can also expect a deluge, as some areas cop more than a month’s rain in just days.

The Bureau of Meteorology has warned sheep graziers across NSW that Friday’s weather might be so bad that their stock might not survive the day.

The bureau has issued several warnings, including flood warnings, for several areas across the three states on Friday.

“Intense rainfall and dangerous flash flooding is a key risk for [Thursday] and [Friday],” it said.

Colder temperatures, showers, and gusty west to north-westerly winds are expected across NSW on Friday, continuing a cold and wet week that has delivered intense rainfall and thunderstorms.

Parts of Queensland have also been soaked after a massive line of thunderstorms stretching 2500 kilometres from the Northern Territory to south-east Queensland brought heavy rain and storms on Thursday afternoon.

In Roma, in southern-central Queensland, a mother and her children sheltered in a bathroom on Wednesday as the roof was torn off their home.

“The interesting thing about this particular event is just how widespread it is,” he told the ABC.

“The rain continues to fall in areas that are already quite saturated with water. So we are expecting further floods and flash flood events.”

He said more than 150 roads were still blocked in the state’s south-east. The local SES had more than 100 calls on Thursday night, including for four water rescues.

Across the border in NSW, there were also several rescues and more than 300 calls for help in the Lismore, Moree and Coffs Harbour areas.

“We can respond to storm damage. We can help people out when they need it – we are preparing for flooding in parts of NSW as well – but those life-saving decisions of not entering those floodwaters is what we’re urging people to think about,” he said.

Dubbo was hit with 40 millimetres, most of it falling in just half an hour, on Thursday afternoon.

Narrabri, in north-western NSW, has already received more rain than it typically expects for the month of November after 76 millimetres fell overnight on Wednesday into Thursday.

The heavy rain trapped an empty school bus and three 4WD between two fast-rising creeks near Narrabri on Wednesday afternoon. However, the SES was “heartened” to see they called for assistance and did not try to drive through the floodwaters.

In Bingara, the SES ferried stranded holidaymakers out of a flooded caravan park

Tibooburra, near the NSW, South Australia and Queensland borders, was hit with a 104km/h wind gust shortly after midday on Thursday, which also brought an intense torrent that dumped 13 millimetres of rain in 20 minutes.

On Friday morning, there were flood warnings in place for the Lachlan River at Nanami, and for the Gwydir and Mehi Rivers at Gravesend, Pallamallawa, Yarraman Bridge and Moree.

The focus has moved to the state’s south, with a severe thunderstorm warning issued for the south-west slopes, parts of the south coast and the ACT on Friday morning.

“Severe thunderstorms are likely to produce damaging winds and heavy rainfall that may lead to flash flooding in the warning area over the next several hours,” the bureau said.

There are also flood and severe weather warnings in force for Victoria, with much of the state expecting wind gusts up to 90km/h and heavy rain on Friday.

There is a flood warning for Melbourne’s Yarra River, but most of the rain is expected in Gippsland, in Victoria’s east. A severe weather warning for heavy rain has been issued for the region, with flash flooding warnings in place.

Friday’s rain will be followed by a cold and windy weekend, with snow to low levels on Sunday. Snow is also likely in Tasmania at the weekend.